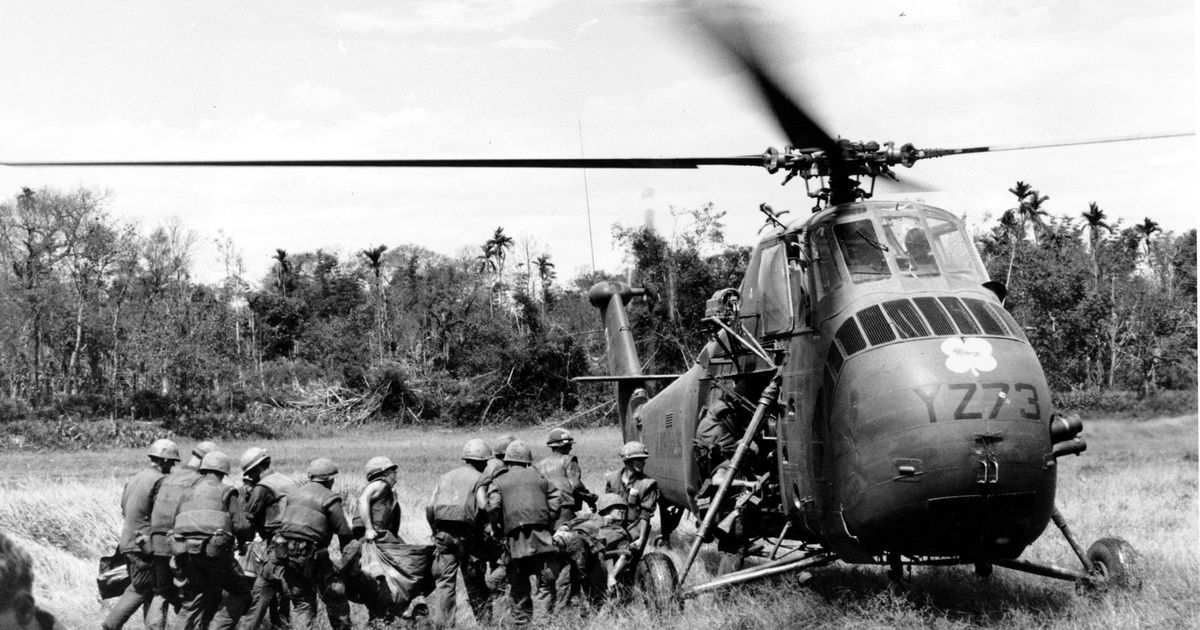 Each week, The Spokesman-Review examines one question from the Naturalization Test immigrants must pass to become United States citizens.

Today’s question: Why did the United States enter the Vietnam War?

The right answer for the naturalization test is “to stop the spread of communism.”

The full answer is a bit more complicated for a chapter of American history that started in the 1940s and continued into the 1970s.

“It was about communism, but it was also about capitalism,” said Matthew Sutton, a professor of modern U.S. history at Washington State University.

There was a competition between the United States and the Soviet Union for foreign markets and access to natural resources. It was also about the end of colonialism and an effort to bring a Western style democracy to a country that had no cultural or political basis for such a system.

Sutton, chair of the Washington State University History Department and Berry Family Distinguished Professor in the Liberal Arts, said the roots of America’s involvement in Vietnam go back to the era of European colonialism.

Vietnam was a French colony through the 1930s, but was taken over by Imperial Japan during World War II. When the war ended, the French made an unsuccessful attempt to reassert control over the country but were defeated by Vietnamese who had been fighting the Japanese and wanted to control their own country.

American efforts to stop the spread of communism in Europe after World War II expanded to Asia after Mao Tse-tung and the communists took over China in 1949.

For U.S. officials, the communist victory in China was a shock comparable to Pearl Harbor for American officials, historian Barbara Tuchman wrote in her book “The March of Folly: From Troy to Vietnam,” which lists the war as an instance where a country did things contrary to reason, evidence and its best interests, even though people at the time were arguing against taking that action.

The United States fought the communists to a stalemate in Korea and aided the French in their war against the Viet Minh rebels in Vietnam.

“By 1954, American officials and politicians of both parties had come to regard Vietnam as vital to U.S. security,” Frances Fitgerald wrote in “Fire in the Lake,” her Pulitzer Prize winning history of the war. “If Vietnam fell under communist domination then the whole of Southeast Asia would follow after it.”

After the Viet Minh defeated the French at Dien Bien Phu in 1954, the country was divided between north and south. A series of U.S. presidents – Dwight Eisenhower, John Kennedy, Lyndon Johnson and Richard Nixon – committed an increasing number of American military and foreign aid to shore up South Vietnam and defeat efforts by the North Vietnamese army and its local guerilla supporters, the Viet Cong, to topple that country’s government.

Harry Truman was blamed as the president who “lost China,” Sutton said. None of his predecessors wanted to be labeled as the one who lost South Vietnam. Eisenhower sent advisers and assistance with the condition that the South Vietnamese government lived up to certain standards which it failed to meet.

When Kennedy took office in 1961, America’s involvement in Vietnam “was simply a given, assumed and unquestioned,” according to the recollection of one administration official mentioned in Tuchman’s book. If communism wasn’t stopped in Vietnam, “it would be stronger the next time,” according to the belief at the time.

But Kennedy had been in Vietnam about 10 years earlier and thought a democratic government could only survive with the support of the people throughout the country, which the South Vietnamese people didn’t have.

“Throughout the long folly of Vietnam, Americans kept foretelling the outcome and acting without reference to their own foresight,” she wrote.

After Kennedy’s assassination in late 1963, Johnson faced a choice of de-escalating America’s role in Vietnam and eventually pulling out, or sending in more troops, Sutton said. He chose the latter.

Johnson faced a dilemma, Fitzgerald wrote. “Losing” Vietnam would be unacceptable to the public, but the public would also be reluctant to accept another ground war in Asia, particularly one that military advisers had concluded had no certainty of immediate success.

“His political strategy was therefore to conceal his doubts about the outcome of the policy while attempting to convince the public of the necessity for the war,” she wrote.

The increased demand for drafted troops, along with higher American casualties, generated growing opposition to the war. Nixon was elected in 1968 with a “secret plan” to end the war, but he initially expanded it with secret attacks on nearby Cambodia. He began “Vietnamizing” the war, withdrawing American ground troops as the Pentagon increased air strikes and air support for South Vietnamese troops while pushing for a settlement.

A peace agreement was signed in 1973 that ended American military involvement. The peace agreement allowed for American ground troops to intervene again if the cease fire were broken, but Congress passed an amendment to prohibit further intervention in South Vietnam.

The North Vietnamese and Viet Cong had a series of attacks in 1973 and by the start of the next year the South Vietnamese president said the peace agreement was no longer in effect. Although the South Vietnamese army was bigger and better equipped, the communist forces were successful that year and by the start of 1975 were moving so swiftly that even officials in Hanoi were surprised. Several large cities fell to the North Vietnamese in March 1975 and by the end of April they had entered Saigon and raised the Viet Cong flag above the presidential palace as desperate residents scrambled for the limited space on evacuation helicopters at the U.S. embassy.

Even though that iconic image from 1975 is reminiscent of last week’s evacuation of the Kabul embassy, it’s too early to draw parallels between the United States involvement in Vietnam and in Afghanistan, Sutton said.

Vietnam did become a communist country, but over time has become a nation with diplomatic relations with the United States and some economic ties.

But in both cases, the United States seemed to operate from a sense that “the American way is the best way” and that the countries would embrace those values, become more democratic and offer their people more freedom. But Vietnam and Afghanistan had different political systems, different cultures and different religious beliefs.

It will be interesting to see who gets blamed for losing the war in Afghanistan, Sutton said.

It won’t necessarily be President Joe Biden, he added. Nixon was president when Saigon fell but nobody blames him for losing Vietnam. They blame Johnson.

Sorgente articolo:
We the People: The reasoning behind the Vietnam War was not as simple as stopping the spread of communism – The Spokesman Review