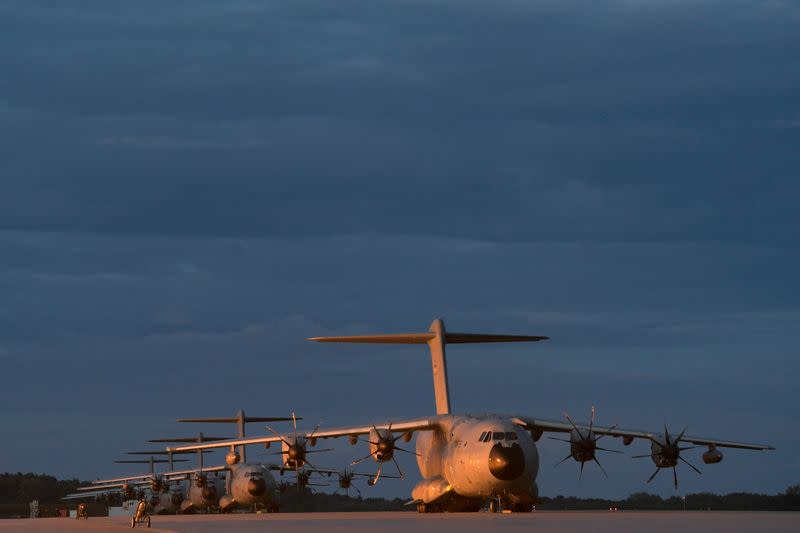 WUNSTORF (Reuters) – The last German troops returned to the northern air base of Wunstorf on Friday, after evacuating more than 5,300 people from 45 nations out of Kabul airport over the past 11 days.

Three military aircraft landed on the base, greeted by fire engines spraying fountains of water for the planes to pass through as a welcome ceremony.

The aircraft brought home more than 300 soldiers involved in the evacuations, with paratroopers, special forces, military police, medical staff and dog handlers with their dogs among them.

“You have seen the outrageous and achieved incredible things,” said German Defence Minister Annegret Kramp-Karrenbauer, who had welcomed the troops at their stop-over in the Uzbek capital Tashkent and travelled back with them.

The German military ended its airlift from Kabul airport late on Thursday after evacuating 5,347 people, including more than 4,100 Afghans.

But around 300 German citizens remain in the country, according to the foreign office in Berlin – besides an unknown number of former Afghan staff and their families, with a support network founded by German troops estimating https://www.reuters.com/world/europe/germany-left-5000-former-staff-families-behind-afghanistan-network-says-2021-08-27 the number of those left behind to be at least 5,000.

“It is extremely painful knowing that, in the limited time we had, we have not succeeded and could not succeed in evacuating all those who have worked for or with Germany in Afghanistan,” said the head of the joint operations command in Potsdam, Lieutenant-General Erich Pfeffer.

Kramp-Karrenbauer repeated Germany’s promise to take in former Afghan staff after an Aug. 31 deadline for evacuations from Kabul airport has passed.

The Taliban have said that Afghans with permission to leave will be able to do so on civilian flights once foreign troops withdraw. But many former Afghan staff fear persecution at the hands of the former insurgents who seized the capital less than two weeks ago.

Overall, up to 600 German soldiers were involved in one of the biggest airlifts in the Bundeswehr’s history. The German planes were about to take off from Kabul airport for the last time when a suicide bombing occurred, killing more than 90 people.