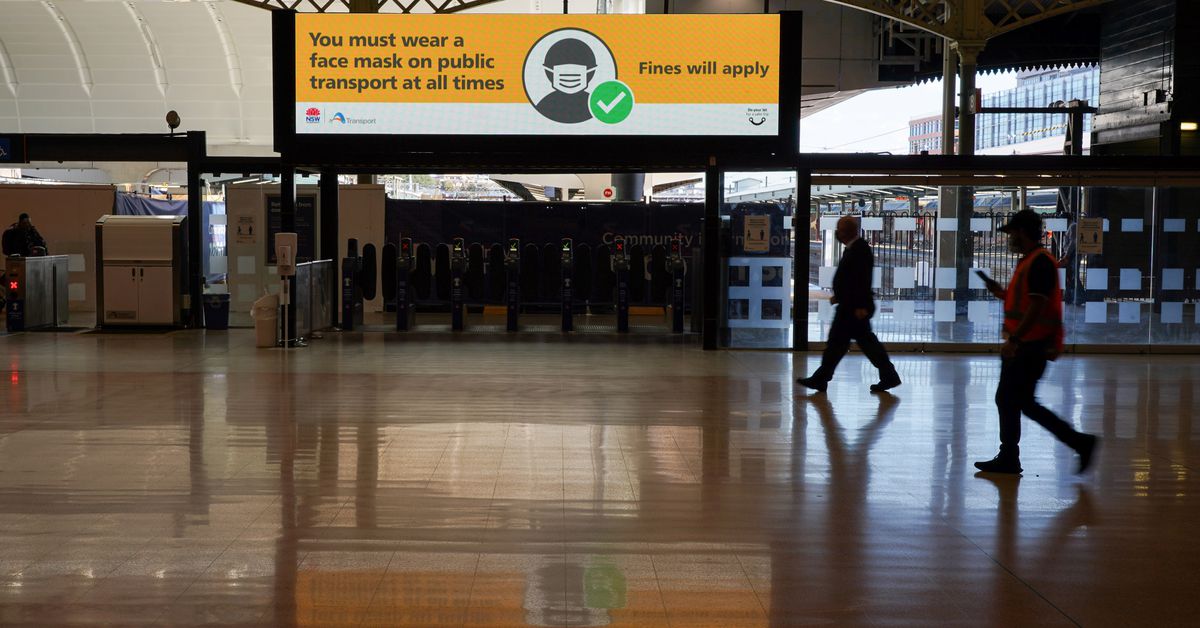 SYDNEY, Aug 30 (Reuters) – As Australia’s COVID-19 deaths exceed 1,000, a grim toll but modest by global standards, a country that has used relentless lockdowns now faces perhaps its biggest health policy challenge of the pandemic – how to reopen.

The highly infectious Delta variant has breached the country’s fortress-style controls and entrenched itself deep enough in Sydney, Australia’s biggest city, and with a foothold in Melbourne, that authorities have dispensed with plans to eliminate it.

Instead, they plan to ramp up Australia’s lagging vaccination effort and live with COVID-19, an approach that would help struggling businesses but which is opposed by states determined to crush the disease.

Australia reported four fatalities on Monday, taking the total death toll from COVID-19 to 1,003, according to government data. It has logged an average of two to three deaths a day recently, the data shows.

But while deaths are creeping higher, infections are surging to successive record highs above 1,200 a day. With more than half the population in lockdown, even those areas with little or no infections are affected.

The exuberance that accompanied Australia’s early suppression success has since been replaced with community frustration at a delayed vaccine programme that has only recently picked up pace.

Just over 33% of those aged 16 and older have received two vaccine doses, well below most comparable nations, according to a Reuters tracker.

As the weary nation reopens, authorities hope to avoid the soaring infections and rising death experienced in countries such as Britain and the United States – which recently posted more than 1,000 deaths in a single day.

The lesson for Australia is that mask-wearing should not be discarded as restrictions ease and that classrooms should be better ventilated to protect students from the airborne virus, said epidemiologist Raina MacIntyre.

“Wearing a mask is a small price to pay to get that additional layer of control,” said MacIntyre, head of the Biosecurity Research Program at the Kirby Institute, UNSW Medicine. “We’ll need a vaccines-plus strategy as well as ventilation.”

Australia plans to start easing restrictions once 70% of those aged 16 and over are fully vaccinated, expected late in the year. After 80% comes a gradual reopening of international travel, according to the government-backed plan modelled by the Melbourne-based Doherty Institute.

Prime Minister Scott Morrison wants Australia to treat COVID-19 like the flu as vaccination rates rise. “That is our goal, to live with this virus, not to live in fear of it,” he said last week.

But some largely infection-free states, including Queensland and Western Australia, are pushing back as they watch health services at the centre of the Delta outbreak in the Sydney area come under stress.

There are 840 people in hospital being treated for COVID-19 in the epicentre, with 137 in intensive care and48 requiring ventilation.

Mark McGowan, premier of Western Australia, said his iron ore-exporting state wanted to continue to “crush and kill” the virus, with lockdowns when necessary.

“We are not in lockdown and that’s great, but tourism is like a pipeline,” he said. “It doesn’t matter where that pipeline is broken. If you sit at the end of the pipeline nothing is coming through.”

The Australian economy, which rebounded swiftly in the pandemic’s early stages, is set to contract sharply this quarter, threatening to push the country back into recession if the decline persists for the rest of the year.

In the Group of 20 big economies, Australia is the last to mark 1,000 COVID-19 deaths. Among major Asia-Pacific economies, four – New Zealand, Hong Kong, Taiwan and Singapore – have well below 1,000 fatalities, with New Zealand having the lowest at just 26.

Australia’s rising case count means it will try to reopen under a cloud of infections when, up until the Delta strain, it was largely virus-free.

Delta’s high infectiousness, short incubation, and asymptomatic spread, meant it spread quickly after being first detected in Sydney in June. Caseloads are higher for younger people, who have had limited or no access to vaccines.