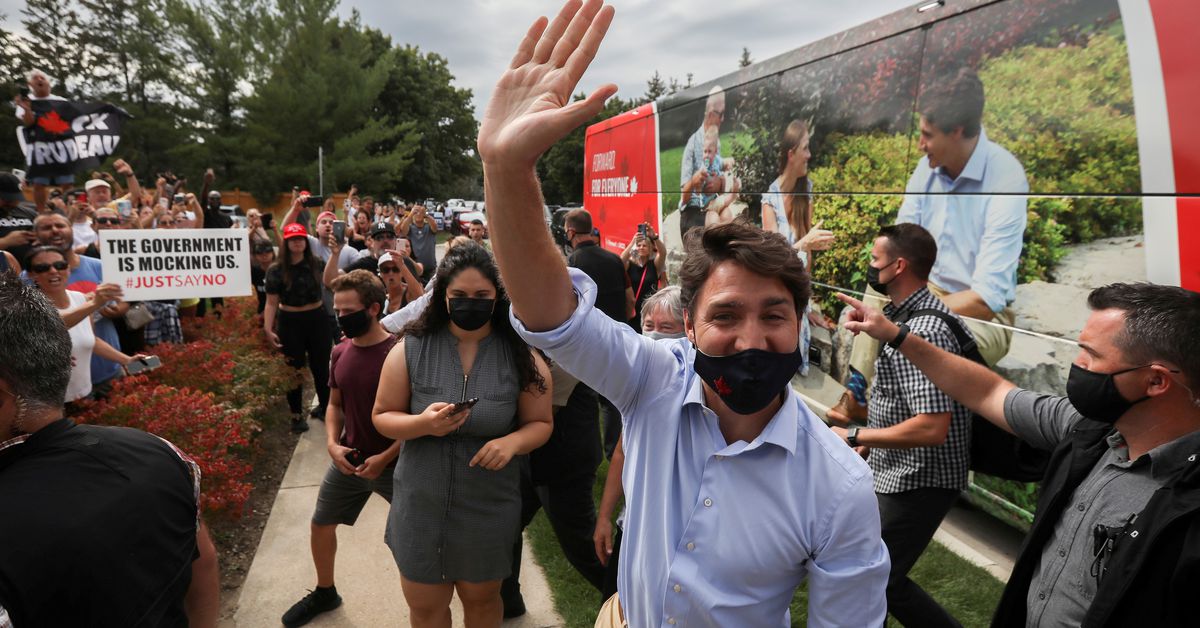 OTTAWA, Aug 30 (Reuters) – Canadian Prime Minister Justin Trudeau plunged back into campaigning on Monday after groups of unusually vocal and abusive protesters disrupted his weekend election rallies, at one point forcing him to cancel an event.

Trudeau, whose ruling Liberals are in a neck-and-neck race with their Conservative rivals ahead of the Sept. 20 vote, spoke to media in the Quebec town of Granby on Monday but did not refer to the unrest over the weekend.

In scenes rarely seen in Canada during federal campaigns, demonstrators in the Ontario towns of Bolton and Cambridge shouted death threats and screamed profane abuse at Trudeau, many referring to the government’s push for people to get vaccinated against COVID-19.

Trudeau’s team took the unusual decision to cancel an evening rally planned for near Bolton on Friday, saying the protests could endanger public safety. His announcement on Sunday of policies to combat climate change was in part drowned out by the crowd in Cambridge.

Trudeau, 49, is the son of former Liberal Prime Minister Pierre Trudeau, who in the early 1980s was extremely unpopular in Western Canada over policies opposed by the energy industry, some provincial governments and many Western Canadians.

“I’ve never seen this intensity of anger on the campaign trail or in Canada, not when I was a kid, even with my dad visiting out West, where we did see anger, certainly not in my last 12 years as a politician,” he told reporters on Friday.

Trudeau’s insistence that all Canadians get COVID-19 vaccinations has generated the same kind of anger among right-wing groups as in the United States.

“I’m not going to back down on a message that Canadians know is the right path forward,” Trudeau, who has been in power since 2015, said on Sunday.

The Conservatives denounced the images and behavior on the campaign trail as disgusting and demanded they stop. That said, some of the people at the Bolton protest wore shirts identifying themselves as working for a Conservative legislator.

Dan Robertson, chief of strategy for Conservative leader Erin O’Toole, suggested the Liberals, who have a minority government that depends on opposition parties to pass legislation, might be seeking to benefit from the protests.

“It’s not terribly difficult to re-jig a tour to avoid demonstrators (and) confrontations — if you wanted to,” he tweeted on Monday.