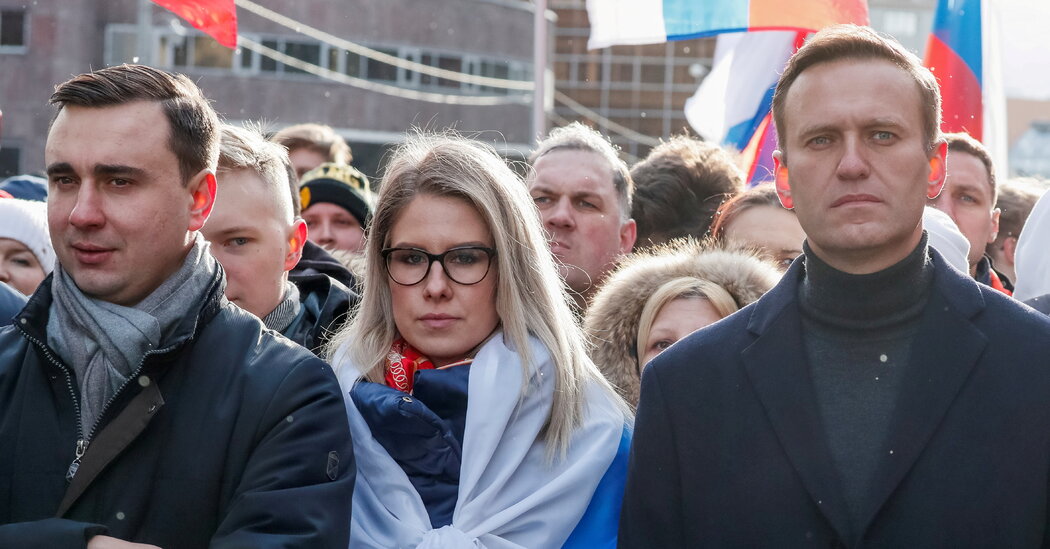 MOSCOW — Evoking the dark era of Soviet repression, Russian politicians and journalists are being driven into exile in growing numbers.

The steady stream of politically motivated emigration that had accompanied President Vladimir V. Putin’s two-decade rule turned into a torrent this year. Opposition figures, their aides, rights activists and even independent journalists are increasingly being given a simple choice: flee or face prison.

A top ally of the imprisoned opposition leader Aleksei A. Navalny left Russia this month, state media said, adding her to a list of dozens of dissidents and journalists believed to have departed this year. Taken together, experts say, it is the biggest wave of political emigration in Russia’s post-Soviet history.

This year’s forced departures recall a tactic honed by the K.G.B. during the last decades of the Soviet Union, when the secret police would tell some dissidents they could go either west or east — into exile or to a Siberian prison camp. Now, as then, the Kremlin appears to be betting that forcing high-profile critics out of the country is less of a headache than imprisoning them, and that Russians abroad are easy to paint as traitors in cahoots with the West.

On Aug. 7, Lyubov Sobol, the most prominent ally of Mr. Navalny who had remained inside Russia, flew to Turkey, pro-Kremlin television channels reported. Earlier this month, a court sentenced Ms. Sobol to a year and a half of restrictions on her movement, including a ban on leaving the Moscow region. But the authorities granted her a few weeks’ freedom before the sentence went into effect — a clear signal to Ms. Sobol that she had one last chance to get out.

“It’s best of course to participate in Russian politics from inside Russia,” Ms. Sobol said in a recent interview. “But for now, the risks of this are too great.”

Speaking to The New York Times on Aug. 5, Ms. Sobol acknowledged that she was considering leaving because she faced prison time in other pending criminal cases. She has remained active on social media, commenting on events in Russia, but has not revealed her whereabouts; on Thursday, she posted that a surgeon in Armenia had performed a long-delayed operation on her nose.

Andrei Soldatov, who co-wrote a book on the history of Russians abroad, “The Compatriots,” with Irina Borogan, described the practice of pushing dissidents out as a “very smart tactic” by the Kremlin. The two have themselves been in self-imposed exile in London since September, having received signals that it would be dangerous to return, Mr. Soldatov said.

“When people can choose between radicalizing further or leaving, people still have a choice, and they leave,” he said. “This reduces the pressure on the system.”

This year’s spate of departures — touched off by the crackdown on dissent that followed Mr. Navalny’s return to Russia in January — has included more than a dozen national and regional figures in Mr. Navalny’s movement, which has been outlawed as extremist; other opposition activists from across the country; and journalists whose news outlets have been banned or branded as “foreign agents.”

One investigative journalist, Roman Badanin, was on a family vacation in Africa last month when his outlet, Proekt, was declared an “undesirable organization,” making any association with it a potential crime. He considered returning home to face prosecution. Doing so could have made him a political star but would have thwarted his ability to continue as a journalist, and time spent in prison “would be my least productive years,” he said.

So Mr. Badanin flew from Morocco to New York, packing little but his warm-weather vacation clothes. He has stayed with a friend in California and helped some of his staff members leave Russia, as well. Mr. Badanin said that when the police raided his deputy’s home, the message could not have been more clear: The detective pointedly handed back the passport he found.

The question for the new exiles is how to remain relevant at home. Mr. Badanin plans to create a news outlet based outside Russia of interest to people in Russia — a challenge because Russian émigrés often grow detached from their homeland and “become interesting only to each other.”

The former oil tycoon Mikhail B. Khodorkovsky, who spent 10 years in prison after falling afoul of Mr. Putin and now lives in London, said he spends 12 hours a day immersed in communications with people in Russia. He is determined, Mr. Khodorkovsky said in a phone interview, to make sure he does not lose touch with a country he last saw as a free man in 2003.

Two news outlets and a legal-rights group in Russia backed by Mr. Khodorkovsky shut down this month after organizations linked to him were declared “undesirable.” Andrei Pivorarov, a former head of Mr. Khodorkovsky’s Open Russia movement, was arrested after boarding a flight to Warsaw in May — a sign that not all dissidents are being allowed to flee.

“I believed it was imperative to continue working in the open and in public until the last moment, so long as that possibility existed,” Mr. Khodorkovsky said. But now, he said, “the risks of such work have become too great.”

As opposition leaders leave, the pro-Kremlin news media scornfully reports on their departures. A comment posted to a popular pro-Kremlin account on the social network Telegram, for instance, said Ms. Sobol’s exit showed that “the Navalnyites can be associated with nothing but cowardly rats.”

Mr. Navalny’s associates are trying to retain their influence through corruption investigations and live streams on YouTube, and by campaigning for a coordinated protest vote in Russian parliamentary elections in September. But they do not highlight the fact that they are abroad.

Ivan Zhdanov, the executive director of Mr. Navalny’s team, left Russia in January, helping coordinate the protests that followed Mr. Navalny’s return and arrest. He decided not to go back after the Russian authorities accused him of recruiting minors to protest. In a phone interview from a location in Europe that he would not disclose, he argued that the battlefield of Russian politics had largely moved online.

“What’s important is what we are doing, not whether a certain employee or a certain number of employees has crossed the border of the Russian Federation,” Mr. Zhdanov said.

In March, the police in southern Russia arrested Mr. Zhdanov’s 66-year-old father, a retired local official, on suspicion of abuse of office. He is now jailed in Russia’s Far North.

“These are terrorists who took a hostage,” Mr. Zhdanov said of his father’s arrest, pledging that he would not change course.

For Mr. Gudkov, the Moscow politician, it was the threat of jail time for a relative that forced him out of the country.

In June, people close to the authorities called Mr. Gudkov’s wife and father to pass along the message that he and his 61-year-old aunt faced prison in a case over allegedly unpaid rent. Despite being a suspect in a criminal investigation, Mr. Gudkov was able to get in his car and drive to Ukraine — a move that he believes reduced the pressure on his aunt.

Mr. Gudkov, who served in Parliament from 2011 to 2016, said the Russian authorities were convinced that not enough dissidents were allowed to leave the country in the Soviet era, leading to internal political pressure that helped bring about the country’s demise.

But officials fail to recognize the significance of the internet, he said.

“Our generals in the security agencies are preparing for the last war,” Mr. Gudkov said from his current place of refuge, in Bulgaria. “Now if you leave, you are heard just as well, if not better.”

Some Putin critics would disagree.

Yulia Galyamina, who helped lead a campaign against a referendum last year that allowed Mr. Putin to rule until 2036, said she refused to take the hint to leave while she was under criminal investigation. She received a two-year suspended sentence, preventing her from running for Parliament in September. She is now working with another opposition candidate, but staying away from street protests on the advice of her lawyer.

“I’m sorry, but how will anything change here if everyone leaves?” she said. “When everything starts collapsing, power will fall into the hands of those who are close by.”