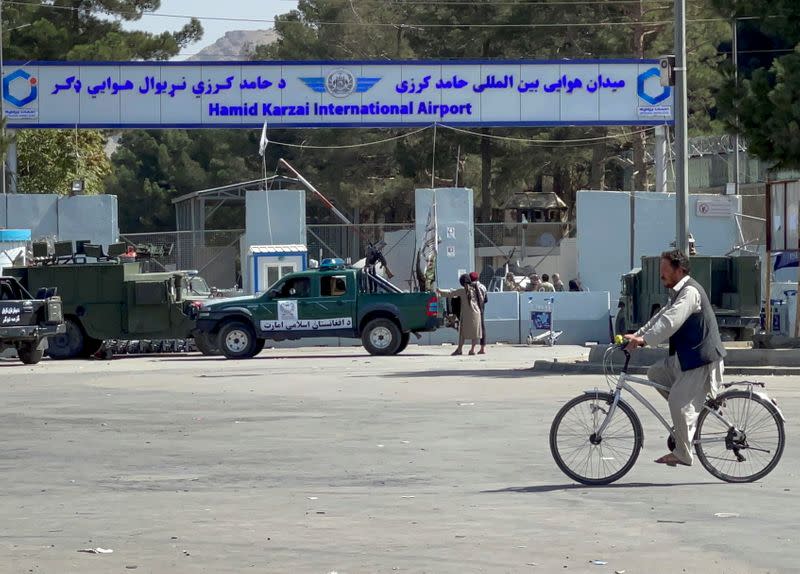 ISTANBUL (Reuters) – Repairs need to be made at Kabul airport before it can be opened to civilian flights, Turkish Foreign Minister Mevlut Cavusoglu said on Sunday, as Ankara considers providing help to the Taliban to operate the airport.

Ankara has been in talks with the Taliban about providing technical help to operate Kabul airport after the Aug. 31 deadline for troops to leave Afghanistan but said the recent bombing underlined the need for a Turkish force to protect any experts deployed there.

Cavusoglu said on Sunday that inspection reports show runways, towers and terminals, including those in the civilian side of the airport, were damaged and that these needed to be repaired.

“Personnel is needed for this. Likewise, the required equipment needs to be provided,” he said.

Turkey, which is part of the NATO mission, has been responsible for security at the airport for the last six years. Keeping the airport open after foreign forces hand over control is vital not just for Afghanistan to stay connected to the world but also to maintain aid supplies and operations.

Speaking at a news conference with his German counterpart, Cavusoglu said the airport initially needs to be operated to help send humanitarian aid into the country and continue evacuations.

“But also for the airport to be open to civilian flights, including Turkish Airlines, the deficiencies we mentioned need to be taken care of and work needs to be done,” he said, adding that the requests were being relayed to the Taliban.

German Foreign Minister Heiko Maas said Germany was grateful to Turkey for its offer to continue to help run the airport after NATO’s withdrawal and said Germany was ready to support that financially and technically.

Taliban spokesman Zabihullah Mujahid told Reuters on Saturday that “it is a bit too early to decided whether we will need Turkey or Qatar’s help to operate Kabul airport.”

President Tayyip Erdogan has said Turkey has not made a final decision about operating the airport because of security concerns and that his country was “not in a rush to start flights” again to Kabul.

“How can we give the security to you (the Taliban)? How would we explain it to the world if you took over security and there is another bloodbath there? This is not an easy job,” he was quoted as saying by broadcaster NTV on Sunday.

In an interview with Turkish media on a flight back from Montenegro, Erdogan also said the Turkish embassy in Kabul had relocated to its building in the city after operating from the airport for two weeks. He added that Turkey would maintain its diplomatic presence in Kabul.

“They returned to our embassy building in the city centre the other day and they are continuing their activities from here,” he was quoted as saying by broadcaster NTV.

“Our plan now is to maintain our diplomatic presence in this way. We are continuously updating our plans according to developments regarding the security situation,” Erdogan said.

NATO countries have been pulling out their diplomatic missions in Afghanistan following the Taliban’s victory in the country two weeks ago. Turkey has evacuated civilians and troops from Afghanistan except for a small “technical group”.

Erdogan has said Turkey welcomes the Taliban’s statements so far with “cautious optimism” but that it wants to see its actions.