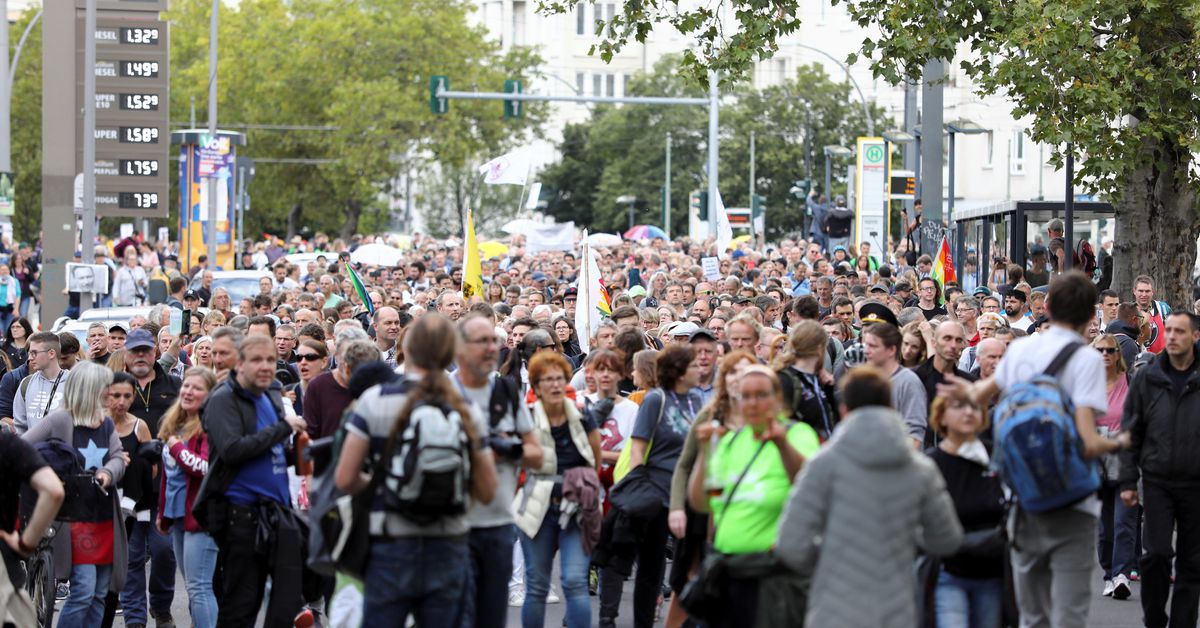 BERLIN, Aug 29 (Reuters) – Several thousand people marched through the streets of Berlin on Sunday for a second day of unauthorised protest against coronavirus vaccinations and restrictions aimed at curbing a fourth wave of the pandemic.

Shouting “Hands off our children”, the protesters waved signs decrying what they called “vaccination apartheid” as parts of Germany consider imposing tougher restrictions on people who are not vaccinated against coronavirus.

Dozens of police dressed in riot gear sought to control the march through residential streets in eastern Berlin.

Berlin police said on Twitter it had detained about 80 people at the demonstration, with a focus on violent people or those calling for violations of coronavirus regulations.

On Saturday, police detained more than 100 people at a similar demonstration after the marchers tried to get through barricades to the government quarter in central Berlin.

About 60% of the German population has now been fully vaccinated and about 65% have had at least one shot, but infections are rising rapidly again, prompting officials to consider ways to encourage more people to get protected.

With a significant minority in Germany sceptical about vaccination, the government in the city of Berlin has come under fire for exhorting teenagers to get the shots, which are authorised for those over the age of 12.

At least one region in Germany is planning to impose tougher restrictions on people who are not vaccinated, an official was quoted as saying on Sunday.

The German government currently requires people to be vaccinated, test negative or have a recovery certificate to enter indoor restaurants, visit hospitals and nursing homes and attend events, parties or do sports indoors.

The southern state of Baden-Wuerttemberg’s social ministry has proposed banning unvaccinated adults from restaurants and concerts altogether, and restricting their contacts.

“If it hits the intensive care units, we have to act,” Thomas Strobl, Baden-Wuerttemberg’s deputy leader, told Bild am Sonntag newspaper.

“It would be wrong to hold everyone jointly liable, including the vaccinated. That’s why there will be different rules for the unvaccinated than for the vaccinated.”

The health minister in neighbouring Bavaria also supports the proposals, the paper said.

The leading candidates vying to replace Chancellor Angela Merkel in a federal election on Sept. 26 have pledged there will be no return to the strict lockdowns of last year and earlier this year even as coronavirus infections jump again.

The country reported 8,416 new cases on Sunday and 12 fatalities, bringing the total number of cases to more than 3.9 million and the death toll to 92,130.

To nudge more people to get vaccinated, the government has said it will stop offering free coronavirus tests from Oct. 11, except for those for whom vaccination is not recommended, such as children and pregnant women.