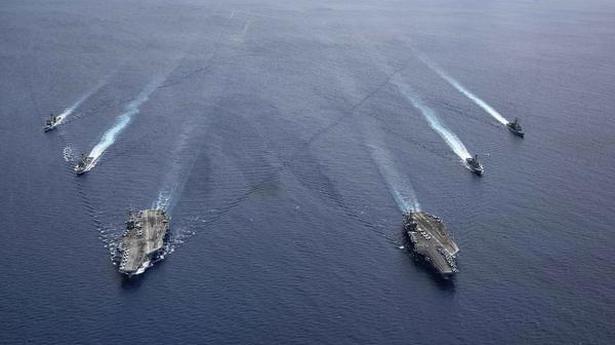 In a move that could have ramifications for the free passage of both military and commercial vessels in the South China Sea, Chinese authorities said on Sunday they will require a range of vessels “to report their information” when passing through what China sees as its “territorial waters”, starting from September 1.

Over $5 trillion trade passes through the South China Sea, and 55% of India’s trade pass through its waters and the Malacca Straits, according to estimates by India’s Ministry of External Affairs (MEA). China claims under a so-called “nine dash line” on its maps most of the South China Sea’s waters, which are disputed by several other countries, including the Philippines, Vietnam, Malaysia and Indonesia.

While it remains unclear how, whether, and where China plans to enforce this new regulation starting Wednesday, the Maritime Safety Administration said in a notice “operators of submersibles, nuclear vessels, ships carrying radioactive materials and ships carrying bulk oil, chemicals, liquefied gas and other toxic and harmful substances are required to report their detailed information upon their visits to Chinese territorial waters,” the Communist Party-run Global Times reported.

The newspaper quoted observers as saying “such a rollout of maritime regulations are a sign of stepped-up efforts to safeguard China’s national security at sea by implementing strict rules to boost maritime identification capability.”

The notice said in addition to those vessels, any vessel deemed to “endanger the maritime traffic safety of China” will also be required to report its information, which would include their name, call sign, current position next port of call, and estimated time of arrival. The vessels will also have to submit information on the nature of goods and cargo dead weight. “After entering the Chinese territorial sea, a follow-up report is not required if the vessel’s automatic identification system is in good condition. But if the automatic identification system does not work properly, the vessel should report every two hours until it leaves the territorial sea,” the notice said.

The Global Times noted the Maritime Safety Administration “has the power to dispel or reject a vessel’s entry to Chinese waters if the vessel is found to pose threat to China’s national security.”

How China will enforce these rules remains to be seen, and in which waters of the sea. Indian commercial vessels as well as ships of the Indian Navy regularly traverse the waters of the South China Sea, through which pass key international sea lanes. While China claims most of its waters, marked by the “nine dash line” on its maps, Indian officials say Beijing has generally only sought to enforce its claims in response to the passage of foreign military vessels not in the entire sea but in the territorial waters around the islands, reefs and other features, some artificially constructed, that China claims.

The “nine dash line” is deemed by most countries as being inconsistent with the United Nations Convention on the Law of the Sea (UNCLOS), which only gives states the right to establish a territorial sea up to 12 nautical miles. The requirements of the latest notice will also be seen as being inconsistent with UNCLOS, which states that ships of all countries “enjoy the right of innocent passage through the territorial sea”.