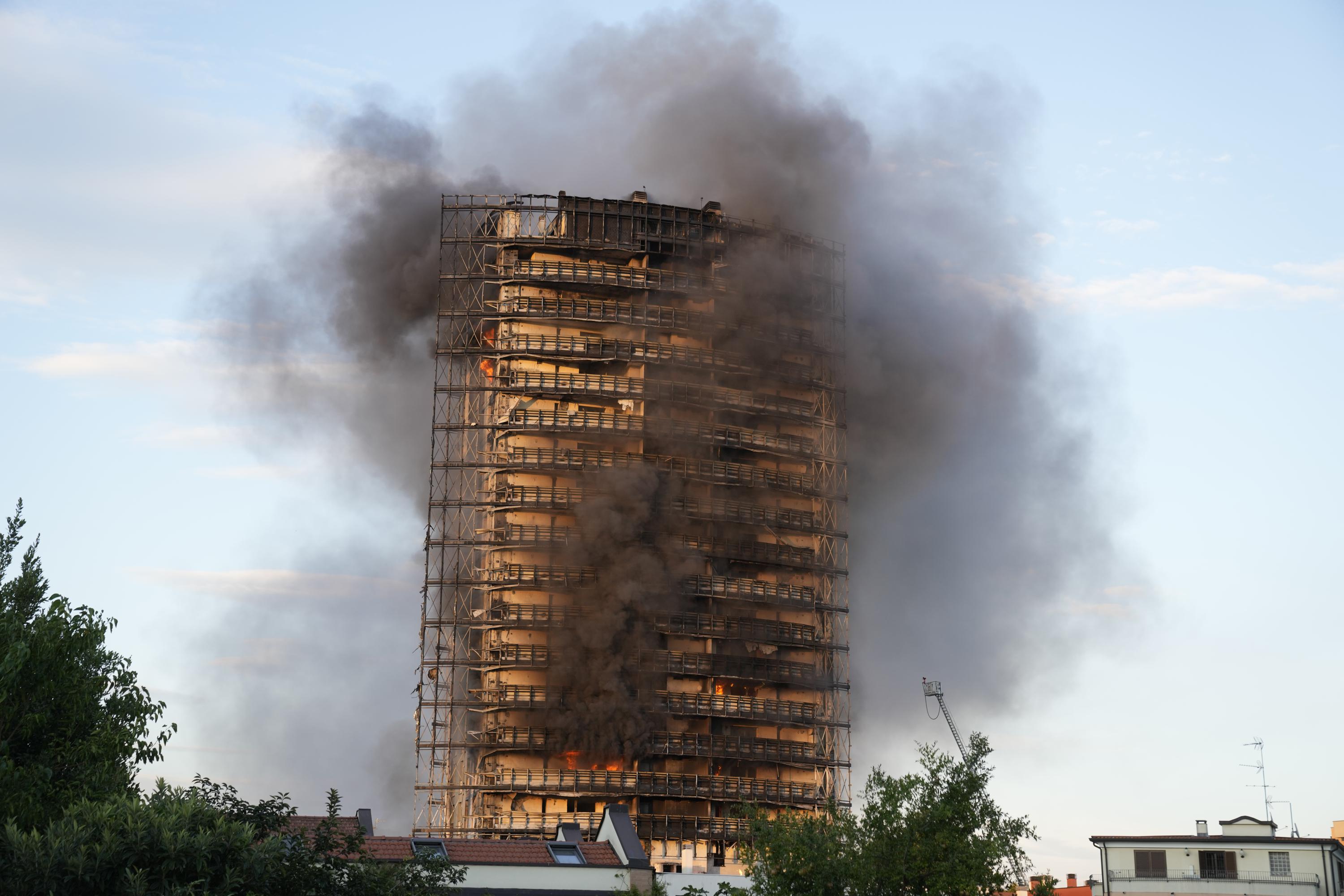 MILAN (AP) — Italian firefighters tackled hot spots Monday in a 20-story apartment building in Milan that was destroyed by fire but said there were no indications that anyone was missing inside, as questions arose about the cladding that witnesses said rapidly fueled the fire.

Some cases of smoke inhalation were reported from Sunday’s blaze, but no serious injuries or deaths.

The fire that sent up a huge plume of black smoke visible for kilometers (miles) recalled the deadly fire that swept through Grenfell Tower in London in 2017, killing 72 people. In that case, the cladding on the outside of that building was blamed for the speed at which the fire engulfed the block, and officials noted similar issues in the Milan fire.

“I have never seen a situation like this,″ said firefighting official Giuliano Santagata. ”Just look at the facade and you see that everything is completely burned, and therefore presume that it was made of flammable material.”

Santagata said the blaze was under control, although there were still outbreaks in some apartments that were being systematically put out.

Milan Mayor Giuseppe Sala said it was “unacceptable” that a building just over a decade old showed itself to be so vulnerable.

“What seems already clear from the start is that the external cladding of the building went up in flames far too quickly, in a dynamic that recalls the Grenfell Tower in London,″ Sala said Monday.

Experts said the lack of victims was due both to firefighters’ speedy response and door-to-door searches as well as to building codes that included firewalls and an ample stairwell.

The fire spread quickly along a cladding that was shaped like a sail, which was both an aesthetic choice and served to screen the balconies.

After the Grenfell Tower tragedy, Italy drafted new rules, with input from firefighters, for claddings of buildings but they have not yet been formally adopted, said Angelo Lucchini, a professor of technical architecture at Milan’s Polytechnic University.

The rules don’t single out any product in particular, such as the one used in Grenfell Tower, but specify how to prevent the spreading of the flames along the facade.

Lucchini said the use of flammable materials themselves per se is not necessarily a danger.

“It becomes dangerous when the use of this material does not take into account the potential danger, does not follow the design guidelines” and does not include other measures to mitigate the possible threat, he said.

He noted that not all of the panels on the Milan tower burned, indicating that there was some factor that impeded the spread of the fire in some areas.

The 60-meter (nearly 200-foot) tall building, part of a decade-old re-development project, was designed to look like a ship’s keel and included the twin aluminum sails, which burned and fell to the street in pieces.

The fire was reported Sunday by a resident on the 15th floor, who sounded the alarm as he descended the building, alerting other occupants. Residents included Italian rapper Mahmood, the 2019 winner of the San Remo music festival.

When firefighters arrived, the blaze was still mostly contained in one area, allowing them to evacuate the building, but it quickly spread up and down the cladding, according to witnesses.

“The cause of the fires still needs to be determined, but it seems that the rapid spread of the flames was due to the thermal covering of the building,” said Carlo Sibia, an Interior Ministry official in Rome.

Firefighters broke through doors apartment by apartment in the search for anyone left inside and telephoned residents. “There is no evidence of anyone missing,” said commander Felice Iraca.

Prosecutors were on the scene Monday, and national arson investigators also were being dispatched. Prosecutor Tiziana Siciliano said it was too early to speculate about the cause, but confirmed the blaze had started on the 15th floor.

In the Grenfell Tower fire, flammable cladding and lax fire safety standards were blamed for the deadly June 2017 blaze at a high-rise residential tower in London. The fire started in an apartment kitchen and rapidly engulfed the 24-story public housing block.

The Grenfell tragedy prompted inquiries into high-rise building materials and Britain has pledged to spend hundreds of millions of pounds to strip similar combustible cladding from dozens of other publicly owned tower blocks.

Sylvia Hui contributed to this report from London.