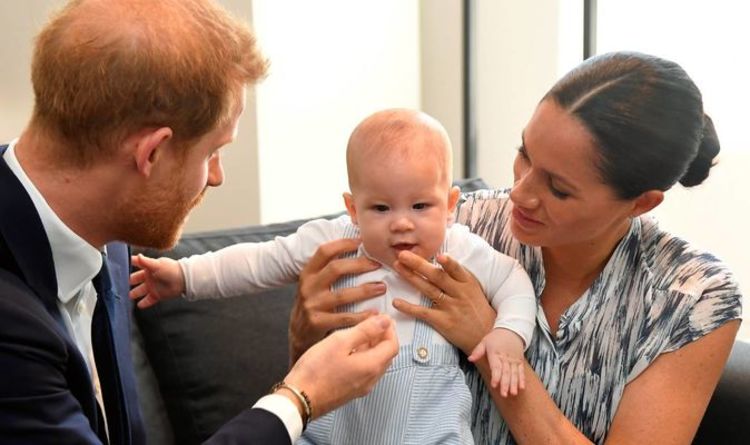 Royally Obsessed podcast hosts Roberta Fiorito and Rachel Bowie looked at the royal babies which were born in 2021 and attempted to guess when their christenings would happen. The royal experts looked at Princess Eugenie’s son, August Philip Hawke Brooksbank, and how he was set to have his in July but there was a Covid scare. They eventually predicted Lilibet’s christening would likely happen in early September and added the format would be very similar to Archie’s christening with one key element now fully in the hands of Prince Harry and Meghan Markle.

Speaking on the Royally Obsessed podcast, Ms Fiorito and Ms Bowie listed off the things they were most excited for over the next few months as royal engagements and events begin to die down.

The pair noticed there were not many christenings of royal children this year and predicted Lilibet was likely to have hers in September.

But the royal experts reflected on Archie’s christening back in 2019 and how the event diverted from royal precedent and theorised Lilibet’s christening would likely follow suit.

Ms Fiorito said she “loved” the images of Archie during the event but recalled most of the media shared was at the discretion of Prince Harry.

Journalists and photographers were not widely allowed during the christening with Ms Fiorito saying the Sussexes “set the precedent” for being private.

Ms Bowie was curious to see if the Royal Family continued that with any future christenings.

She added it was also likely to see Harry and Meghan continue that themselves with Lilibet as they had done with the pregnancy and birth.

Prince William and Kate allowed visitors and photos of their christenings which allowed royal fans a quick glimpse of the royal children.

Royal commentator Richard Fitzwilliams told Express.co.uk: “Harry and Meghan’s relations with the British press went badly downhill when Archie was christened in private and the names of the godparents were not released.

“The Sussexes were emphatic that they intended to do things their own way and so it has proved.”

Family photos of the core Royal Family are traditionally taken at the christenings but it is unsure if these will continue for Lilibet.

The Daily Mail reports Prince Harry wants to christen Lilibet at Windsor in the presence of the Queen as a source alleges they want a royal event for their daughter.

The source said: “Harry told several people that they want to have Lili christened at Windsor, just like her brother.

“They are happy to wait until circumstances allow.”

Prince Harry is reported to have “made his intentions clear” during his UK visit to unveil a statue of Princess Diana.

It would be the first time Meghan has returned to the UK following her departure from the Royal Family.

Royal biographer Angela Levin spoke about the proposed plans and said: “Yet in the meantime, he wants to have baby Lilibet Diana baptised in Windsor. It’s a case of having your cake and eating it.”

Lilibet was born on June 4 with her birth kept secret for several days before being made public.