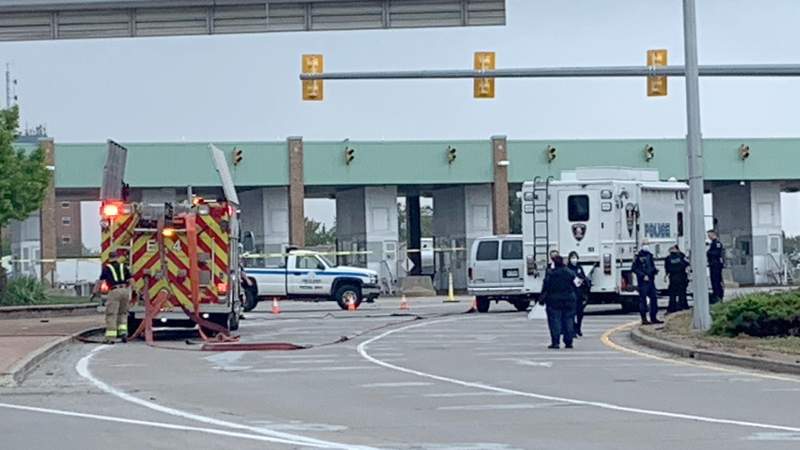 WINDSOR, Ontario – The threat that closed the Ambassador Bridge for several hours Monday centered around two grenades that turned out to be inert, and the U.S. driver who had them in his car is not being charged, Windsor police said.

Officers said they received a report from the Canada Border Services Agency around 9 a.m. Monday (Oct. 4) about two grenades that were inside a vehicle. Members of the Explosive Disposal Unit were sent to the scene in the 2500 block of Wyandotte Street West.

Police learned the grenades had been located during a vehicle inspection at the Ambassador Bridge International Border Crossing, and they were submerged in an unknown white, powdery substances, according to authorities.

Officials evacuated the area before police arrived, and the driver of the vehicle, a United States citizen, had been taken into custody by the CBSA.

Several roads were closed off to vehicle and pedestrian traffic. Police made sure to keep everyone a safe distance from any potential threat, they said.

Investigation revealed nobody else was involved in the incident and no direct threats had been made in connection with the grenades, Windsor police said.

Grenades found to be inert

The Explosive Disposal Unit used a robot to obtain samples of the white powder. Authorities said it did not contain energetic properties and it was not hazardous.

Another member of the unit went to the vehicle and secured the grenades, which were inspected and found to be inert, according to police.

Officers searched the vehicle and were satisfied that there were no other threats.

At the end of the investigation, Windsor police didn’t bring any charges because there was no intent to cause harm or use the grenades “for any nefarious purpose,” according to a release.

Police said since the grenades were inert, no criminal charges needed to be filed.

The driver was turned over by the CBSA to the custody of U.S. Customs and Border Protection without incident, Windsor police said.

“We would like to thank the public for your patience in this matter,” Windsor police said in a release. “All necessary precautions were taken for the safety of the community and everyone involved during this incident. We would like to thank the CBSA for their collaborative efforts in this matter and commend them for their actions during the incident which ensured the safety of community members, travelers, employees and the single busiest international border crossing in North America.

“We would also like to thank Windsor Fire and Rescue and EMS for their assistance in this matter.

“We understand that any incident which causes a closure of an international border can have far-reaching impacts, however it was imperative during this incident to take all necessary precautions under the circumstances presented.”

Previous coverage of this story