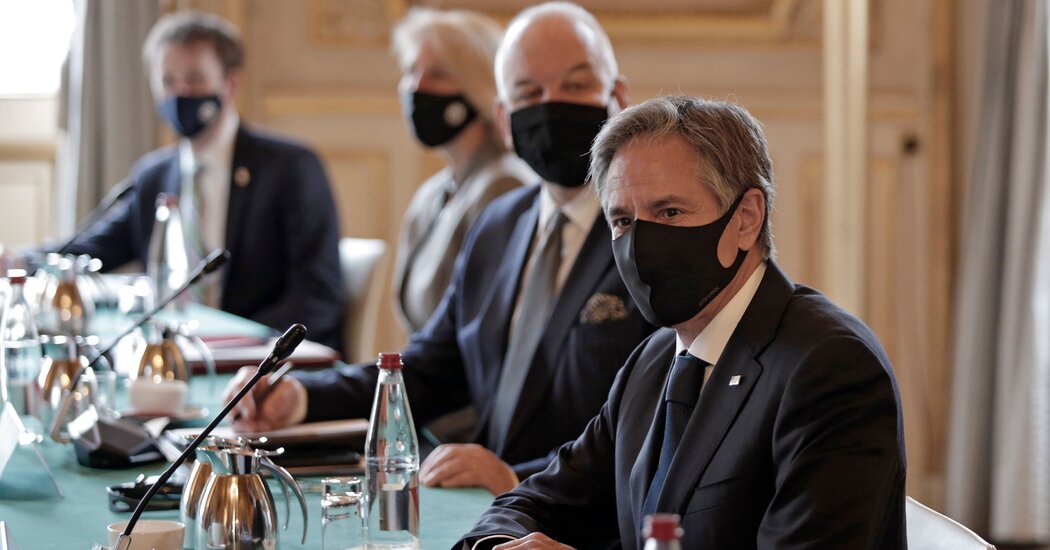 PARIS — Step by step, Secretary of State Antony J. Blinken sought on Tuesday to build back trust between the United States and France following a secretive submarine deal that laid bare the Biden administration’s resolve to counter China — even at the cost of edging out one of America’s oldest allies.

For more than an hour, Mr. Blinken walked the ornate halls of the Quai d’Orsay in Paris and sat with the French foreign minister, Jean-Yves Le Drian, in a private venting session over Australia’s decision to buy nuclear-powered submarines from the United States, dropping an earlier $66 billion contract for diesel-powered ones from France.

The meeting between the two counterparts and longtime friends underscored the importance of putting a personal touch on matters of delicate diplomacy. It was evocative — if perhaps not as momentous — of Ronald Reagan’s walk in the woods with Mikhail Gorbachev to reframe U.S.-Russian relations in 1985, or the deliberative morning strolls of Zbigniew Brzezinski, the national security adviser to President Jimmy Carter, with foreign leaders during the Camp David peace accords between Israel and Egypt in 1978.

But at the end, Mr. Le Drian literally waved away questions about what it would take to convince France that the United States was a reliable partner, indicating still-simmering anger even as both sides agreed to move forward. Mr. Blinken offered that “it’s a pleasure to be here,” but otherwise declined to comment.

The sub snub is but one facet of a larger strain between France and the United States over its own strategy in the Indo-Pacific region and, more broadly, Europe’s long-term military goals.

At least 1.5 million French citizens live in Indo-Pacific countries, and some 8,000 soldiers are based in the region, according to the French government. France also has a large exclusive economic zone there.

President Emmanuel Macron of France has sought to straddle the tense divide between China and the United States, which is re-pivoting its focus to counter Beijing. President Biden, picking up policies that began during the Obama and Trump administrations, has adopted a more strident tone than Europe against China and its human rights abuses, military encroachment in international waters, implied threats to Taiwan and trade disputes with the United States.

In turn, that has made the trans-Atlantic relationship more contingent than it once was — to the dismay of much of Europe.

Mr. Tertrais said Australia’s breach of contract for the submarines, and the role that the United States and Britain played in brokering it, had led to a “breakdown of our strategy in the Indo-Pacific, and the end of any hope France has to be part of the Anglo-speaking ‘five eyes’ club.”

What has upset him, too, Mr. Tertrais said, is “how our American friends just don’t get it.” The U.S. obsession with China notwithstanding, he said, “I’m surprised that our U.S. friends want to resume the conversation as if nothing important happened.”

In recent days, French officials have coldly suggested that the submarines deal has given China an opening to divide allies.

They also have pointed to the clumsy diplomacy over the deal as the latest example of the United States putting its own interests first. That it was announced just weeks after the Biden administration withdrew American troops from Afghanistan, even amid chaos and an unfolding humanitarian disaster there, only served to underscore their point.

Yet in a paper for the Institut Montaigne, Mr. Tertrais and Michel Duclos, a former French ambassador, advised the French government to “tone down its rhetoric about the actions of its partners” and not “rely entirely on the European Union,” given that France is a nuclear state, a permanent member of the U.N. Security Council and a major maritime presence in Asia.

Instead, they concluded, France should intensify its diplomacy with others in the region, like India and Japan, while coordinating with Washington and its other allies about regional strategy.

“The big question remains how France will position itself in what some call the ‘new Cold War’ that is taking off between China and the West,” Mr. Tertrais and Mr. Duclos wrote.

French officials also have seized on the submarine deal to push anew for a European military approach that is more independent from the United States.

“We must survive on our own, as others do,” the European Union’s foreign policy chief, Josep Borrell Fontelles, said last month, in presenting a new E.U. strategy for the Indo-Pacific region that pursues “multifaceted engagement with China” and avoids direct confrontation.

But support for a more Eurocentric defense compact has blossomed and withered over years. Many European nations, including Germany, are skeptical of military alliances that could dilute the authority of the North Atlantic Treaty Organization and the overwhelming support it receives from the United States in the form of funding, troops and matériel.

French officials dealing with Brussels are realistic about how slow Europe’s progress toward military competence really is, and they have downplayed expectations for the French presidency of the European Union that begins on Jan. 1.

Convincing France’s government to move on from the diplomatic dispute, in which Paris recalled its ambassador in Washington, is a deeply personal mission for Mr. Blinken. He considers Mr. Le Drian a friend, and was pained by the accusation that the United States had betrayed France for failing to warn Paris it was about to be bumped from the submarine deal.

It was lost on nobody that Mr. Blinken made Paris his first foreign destination in the aftermath, meaning he will need to double back across the United States later this week for meetings in Mexico.

Mr. Blinken also spoke with Mr. Macron in an unscheduled meeting on Tuesday morning. A senior State Department official, who briefed journalists traveling with Mr. Blinken on condition of anonymity, later described the interactions with the French leaders as cordial and intended to identify “concrete actions” to patch up the rupture. Those efforts will be discussed more broadly later this month, at an expected meeting between Mr. Biden and Mr. Macron during gatherings of world leaders in Europe.

Senior European officials who spoke at a meeting of the Organization for Economic Cooperation and Development appeared to have moved on. The submarine deal drama went unmentioned during public comments of the forum, a few miles from the French foreign ministry, to mark the 60th anniversary of the creation of the 38-nation group.

Instead, officials focused on the economic crisis created by the coronavirus and climate change — and how both have exacerbated financial inequity around the world. In a speech to the forum, Mr. Blinken did not mention China by name, but cited the “challenge of shaping the rules for new and emerging technologies” to ensure that they are not used to oppress or target minority communities, as Beijing is accused of doing.

“The principles at the heart of this organization and our democracies are being challenged by authoritarian governments that argue their model is better at meeting people’s basic needs,” Mr. Blinken said. “Some of these same governments are actively seeking to undermine the rules-based order that has been fundamental to security and prosperity of our countries for generations.”

“The stakes couldn’t be higher,” he said.

Mr. Blinken has based his stewardship of the State Department on restoring international alliances after the tumult of the Trump administration. In a brief encounter with journalists, it was noted that the forum was being held at an interesting time in Europe to discuss American cooperation.

“That’s what we’re all about,” Mr. Blinken responded.