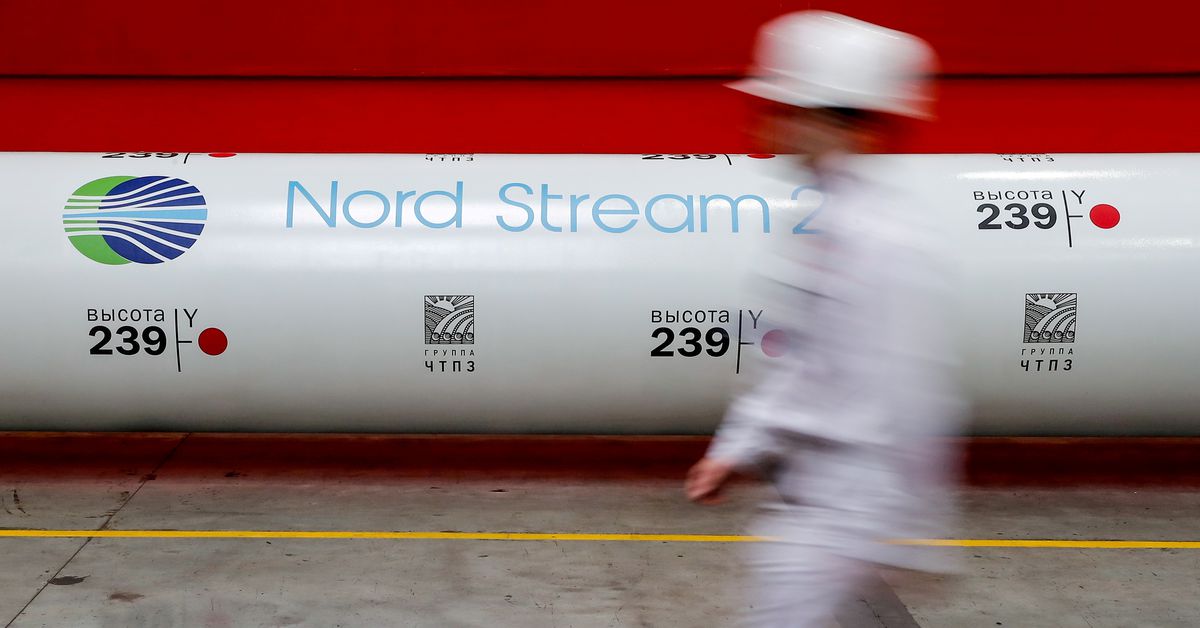 The logo of the Nord Stream 2 gas pipeline project is seen on a pipe at the Chelyabinsk pipe rolling plant in Chelyabinsk, Russia, February 26, 2020. REUTERS/Maxim Shemetov//File Photo

DUESSELDORF, Oct 5 (Reuters) – Germany’s energy regulator said the Nord Stream 2 pipeline must show it would not break competition rules by limiting which suppliers used it and could face a fine if it started pumping Russian gas to Germany without securing necessary approvals.

Nord Stream 2, a project led by Gazprom (GAZP.MM), which has a monopoly on Russian pipeline gas exports, will pump the fuel under the Baltic, bypassing Ukraine, which is embroiled in a long-running territorial dispute with Moscow.

Construction is completed and tests are underway, but the project has faced opposition from the United States and some European nations that say it will make Europe too reliant on Russian gas, which accounts for about a third of European needs.

Opponents also say Russia has applied pressure to try to speed up the German approval process by not supplying extra gas to Europe when the region faces an energy crunch as global gas demand surges and prices hit record levels.

The Kremlin says it is meeting its obligations.

German regulator Bundesnetzagentur (BNetzA) said late on Monday it had asked the pipeline operator, Swiss-based Nord Stream 2 AG, to show it was meeting all regulatory requirements before the pipeline entered service.

“This relates in particular to issues of non-discriminatory network access and the integration of the interconnector into the German market area,” it said, a reference to rules that include ensuring the operator did not restrict access for other gas suppliers.

BNetzA, which said in September it had four months to complete certification, said it could not rule out that Nord Stream 2 operations could start soon, adding that all technical requirements had been met.

But it said the operator could be fined if it started before it secured necessary certification, which will only be given if regulatory requirements, too, are met. read more

A spokesperson for the German government said the successful completion of the certification procedure was a prerequisite for the commercial commissioning of the pipeline.

Analysts say Nord Stream 2 was unlikely to significantly ease gas prices that threaten to translate into hefty bills for European consumers this winter.

European benchmark Dutch wholesale gas for November was trading around 117 euros ($136) per megawatt hour (MWh) on Tuesday, up almost 500% since the start of the year.

“The start of filling of the Nord Stream 2 pipeline could have been the fundamental element the market was waiting for to erase the risk premium on Russian gas. But the market seems to be asking more,” analysts at Engie EnergyScan said.

Nord Stream 2 said on Monday it had started tests on the pipeline, which has capacity to pump 55 billion cubic metres (bcm) of gas a year. It runs parallel to an existing Nord Stream pipeline, doubling capacity of the network. read more

Gazprom, Europe’s largest supplier of natural gas, has said it could pump 5.6 bcm of gas via Nord Stream 2 by year-end. According to European Commission data, EU gas consumption in the first quarter of 2021 rose to 132 bcm, up 10 bcm – or 7.6% – from a year ago.

Germany’s Economy Ministry also has to carry out an assessment before the regulator can send its recommendation to the European Commission. The European Union executive has two months to respond once it receives a submission.

The pipeline operator said: “Nord Stream 2 will continue to undertake all necessary efforts to ensure compliance with all applicable rules and regulations.”

It also said it had appealed against an August German court decision that ruled the pipeline was not exempt from EU rules requiring pipeline owners to be different from suppliers of the gas flowing through them. read more

Nord Stream 2 says these EU rules, which were amended in 2019, were aimed at stopping the project.