A 2,700-year-old private toilet dating back to the days of the First Temple was recently discovered during an archaeological excavation in Jerusalem, according to the Israel Antiquities Authority.

The limestone toilet cubicle was unearthed at a digging site in the Armon Hanatziv neighborhood of Jerusalem, as part of efforts to construct a new tourist complex in the area.

“A private toilet cubicle was very rare in antiquity, and only a few were found to date, most of them in the City of David,” said Yaakov Billig, director of the Israel Antiquities Authority excavation. “In fact, only the rich could afford toilets. A thousand years later, the Mishnah and the Talmud raised various criteria that defined a rich person, and Rabbi Yossi suggested that to be rich is ‘to have the toilet next to his table.’”

The bathroom had a carved stone toilet with a hole in the center, positioned over a deep septic tank, said the IAA.

The find dates back to the First Temple Period and is believed to belong to an “ancient royal estate” that operated in the 7th century BCE, the Antiquities Authority suggested.

“It is fascinating to see how something that is obvious to us today, such as toilets, was a luxury item during the reign of the kings of Judah,” said Eli Eskosido, director of the Israel Antiquities Authority. “​​Jerusalem never ceases to amaze. One can only imagine the breathtaking view.” 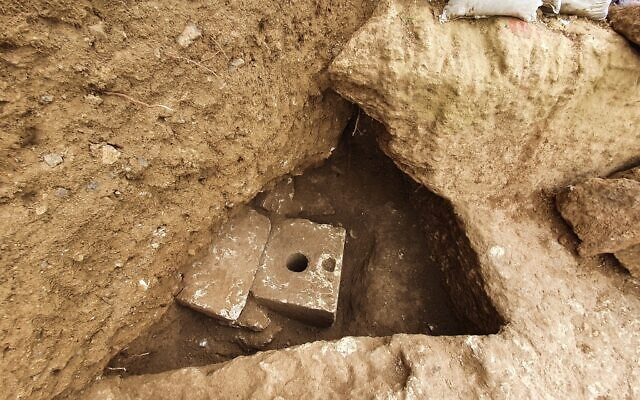 A 2,700-year-old toilet cubicle uncovered during an archaeological dig in Jerusalem. (Yoli Schwartz/IAA)

In the septic tank underneath the toilet, a number of pottery shards and animal bones were also discovered, which could potentially “teach us about the lifestyles and diets of the First Temple people, as well as ancient diseases,” said the IAA.

Alongside the toilet, archaeologists working at the dig site have uncovered stone capitals that once stood atop columns as well as small architectural columns that once served as railings for windows.

Evidence has also been discovered of a garden with fruit trees and other plants that once stood near the toilet cubicle, symbolic of the once “lush mansion.”