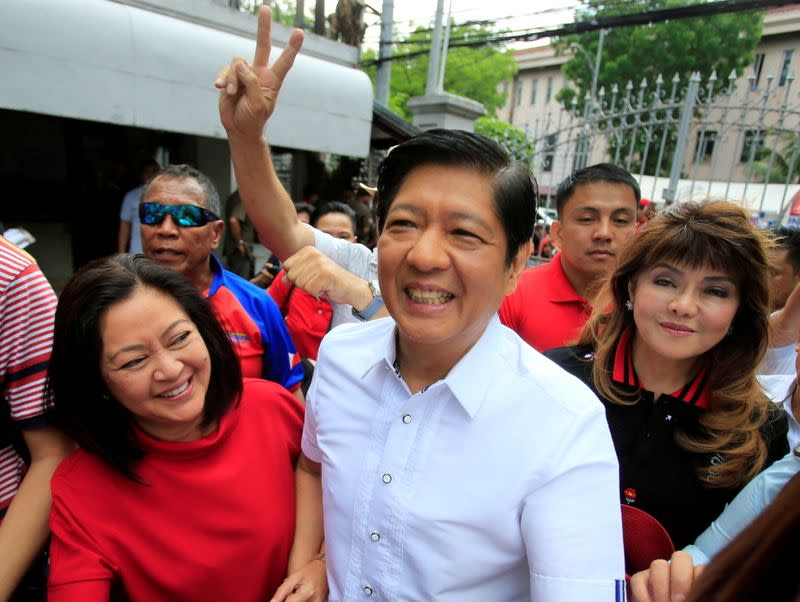 MANILA (Reuters) – The son of late Philippines strongman Ferdinand Marcos declared on Tuesday he will run for president, ending speculation about his political ambitions but stirring anger among victims of his father’s brutal era of martial law.

Ferdinand Marcos Jr, the only son of the late dictator who ruled the Philippines for almost two decades until his 1986 overthrow, offered a “unifying” brand of leadership he said could the heal the country after its COVID-19 crisis.

“Join me in this noblest of causes and we will succeed,” Marcos, a longtime politician popularly known as “Bongbong” and more recently, BBM, said in a three-minute speech streamed on social media.

Marcos is the fourth politician to confirm their intention to run to succeed Rodrigo Duterte, who cannot seek re-election.

The political career of Marcos, 64, has spanned over three decades – as provincial governor, congressman and senator – since his family’s return from exile after fleeing a 1986 “people power” uprising. Marcos senior died in Hawaii in 1989.

The Marcos family is among the country’s most famous dynasties and despite its fall from grace, it has retained far-reaching and powerful political connections.

Marcos Jr’s sister is a senator and former governor and their 92-year-old mother Imelda, famous for her vast shoe collection, was a four-term congresswoman.

One relative is the current ambassador to the United States, another is a high-profile lawmaker.

“If we have learned anything in this time of COVID pandemic, it is that each of us, no matter our station, is in need of the help of our fellow Filipinos,” Marcos said on Tuesday.

His family has long sought to rebuild its image and has repeatedly denied allegations that it plundered billions of dollars of state wealth while in power.

A presidential run would be a big step in a country of 110 million people where many are still haunted by abuses that took place during martial law under Marcos, one of the darkest chapters of modern Philippine history.

“BBM is spitting on the graves of the dead and on the faces of the victims of the Marcos dictatorship,” said Judy Taguiwalo, who represents a group of victims of abuses under martial law.

Human rights group Karapatan vowed to thwart his efforts to return the family to power, urging “all freedom-loving Filipinos to join us in standing for truth and justice”.

Rodel Taton, dean of San Sebastian Law school, believes Marcos has a good chance of winning given his popularity among young Filipinos, his family’s social media clout and its steadfast support in its stronghold of Ilocos Norte.

The Philippines, however, may not be ready for another Marcos presidency, he said. “The country is beset with many issues and problems. A new face, someone who has no attachments and personal burdens, is better.”

Marcos placed second to Sara Duterte-Carpio, daughter of the president, in the latest survey of preferred candidates to succeed him. Some speculate they could run on the same ticket.

The Marcoses and Dutertes have been closely allied, most notably when the president decided to grant the family its request to bury the body of Marcos Senior https://reut.rs/3uLs4Lt in a Heroes’ Cemetery, defying strong opposition from anti-dictatorship groups.