“This is a strategically important deal with a NATO member state, that will create jobs in both countries,” Gantz said on Twitter, adding that it “further deepens the excellent defense relations” between the nations.

Amir Eshel, director-general of Israel’s Defense Ministry, was on hand for the signing of the agreement on Tuesday.

“The agreement that we signed today is yet another milestone in the strategic cooperation between our two countries,” Eshel was quoted as saying in a ministry statement.

“This is the first time that Israel will deliver a full air defense system to a NATO country, and we are proud and thrilled that the Czech Republic is the one,”  he added.

The SPYDER system includes a radar array produced by Elta, a subsidiary of Israel Aerospace Industries.

“I am proud of the Israeli defense industries and its advanced technological developments that are in demand in many countries around the world,” Gantz added on Tuesday. 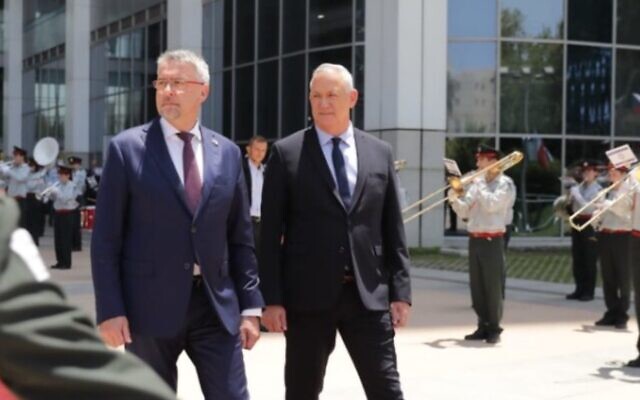 The purchase comes as the country seeks to upgrade its military equipment and further boost ties with Israel, already a close Czech ally. It will replace the obsolete Soviet-made weapons by 2026.

The contract also involves supplies by Czech companies amounting to more than 30 percent of its value.

The Czech ministry added in a statement that it had considered nine different systems from seven producers. “Israel’s Spyder emerged as the most efficient one from the comparison. It is a solution adjusted to Czech needs, compatible with NATO standards and with the involvement of Czech industry,” it said.

Czech Defense Minister Lubomir Metnar hailed the purchase as a step toward getting rid of a Soviet-made system from the 1970s that “does not correspond to current air defense standards.”

The Czech Republic joined NATO in 1999, 10 years after former Czechoslovakia shed the totalitarian Communist regime that had been in power for four decades.

In the past year, ties between Israel and the European nation have become closer.

Czech Foreign Minister Jakub Kulhanek visited Israel in May in a show of solidarity during the recent round of fighting with the Hamas terror group. In March, the Czech Republic opened the Jerusalem office of its embassy after announcing its plans to do so in December 2020.