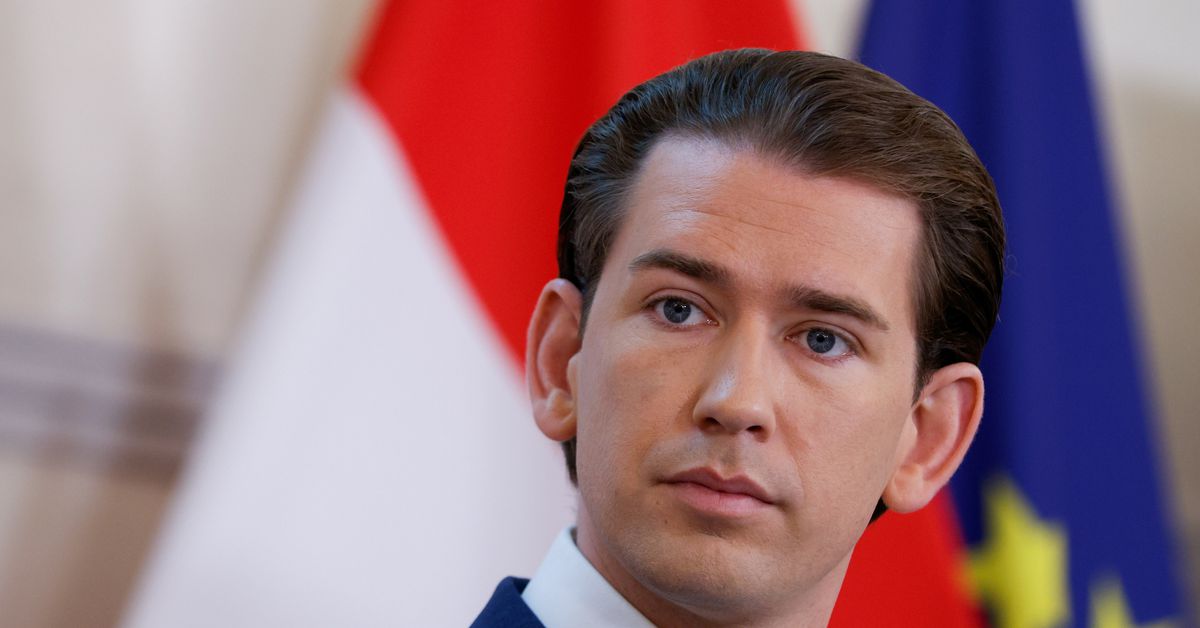 VIENNA, Oct 6 (Reuters) – Austrian Chancellor Sebastian Kurz has been placed under investigation on suspicion of bribery and breach of trust, anti-corruption prosecutors said on Wednesday after raids on the offices of Kurz’s conservative party and several top aides.

The investigation, which prosecutors confirmed hours after raids on the Chancellery, Finance Ministry and the offices of Kurz’s party, is a fresh political threat to Kurz, whom anti-corruption prosecutors placed under investigation separately in May on suspicion of perjury. read more

Kurz and his People’s Party (OVP) dismissed the investigation as politically motivated.

The suspicion in this investigation is that, starting in 2016 when Kurz was foreign minister and seeking to become party leader, and later as he became chancellor, the conservative-led Finance Ministry paid for advertisements in a newspaper in exchange for polling and coverage favourable to him.

“The Prosecutors’ Office for Economic Affairs and Corruption has placed Sebastian Kurz and nine others as well as three organisations under investigation on suspicion of breach of trust … corruption … and bribery …, partly with different levels of involvement,” the office said in a statement.

The early morning raids took place at locations including the homes and Chancellery desks of three senior Kurz aides.

“I am convinced that these accusations, too, will prove to be false,” Kurz said in a brief statement, adding that text-message exchanges had been taken out of context to “construct” a case against him.

OVP Deputy Chairwoman Gaby Schwarz dismissed the raid on its headquarters as “political staging” aimed at achieving a “show effect” to harm both Kurz and the party. The OVP has repeatedly accused anti-corruption prosecutors of bias against it and Kurz, which prosecutors’ and judges’ organisations deny.

That reaction exposed tensions in the ruling coalition between Kurz’s conservatives and the left-wing Greens, who campaigned on “clean politics” and have avoided saying how far they will support Kurz if the cases against him progress.

“The accusation of show politics is an empty one simply because a judge’s approval is required for this instrument, namely carrying out a raid as part of an investigation,” Greens leader and Vice Chancellor Werner Kogler told a news conference, adding that prosecutors should be able to keep working freely.

Tabloid daily Oesterreich, which Austrian media identified as the newspaper at the centre of the investigation, issued a statement earlier on Wednesday denying taking state money for advertising in exchange for publishing polling.

Without naming the newspaper, prosecutors said they suspect that from 2016 until at least 2018 Finance Ministry funds paid for party-politically motivated and sometimes manipulated polling that was published in the newspaper, and that some of those under investigation could influence what was reported.

Kurz took over as OVP leader in May 2017 and led his party to an election victory later that year.

Finance Minister Gernot Bluemel told a news conference the investigation related to a time before he took office last year and he was not a target. Kurz was due to appear on ORF TV’s evening news at 10 p.m. (2000 GMT).

Austria’s three main opposition parties called for a special session of the lower house of parliament to address the investigation and called on Kurz to resign.