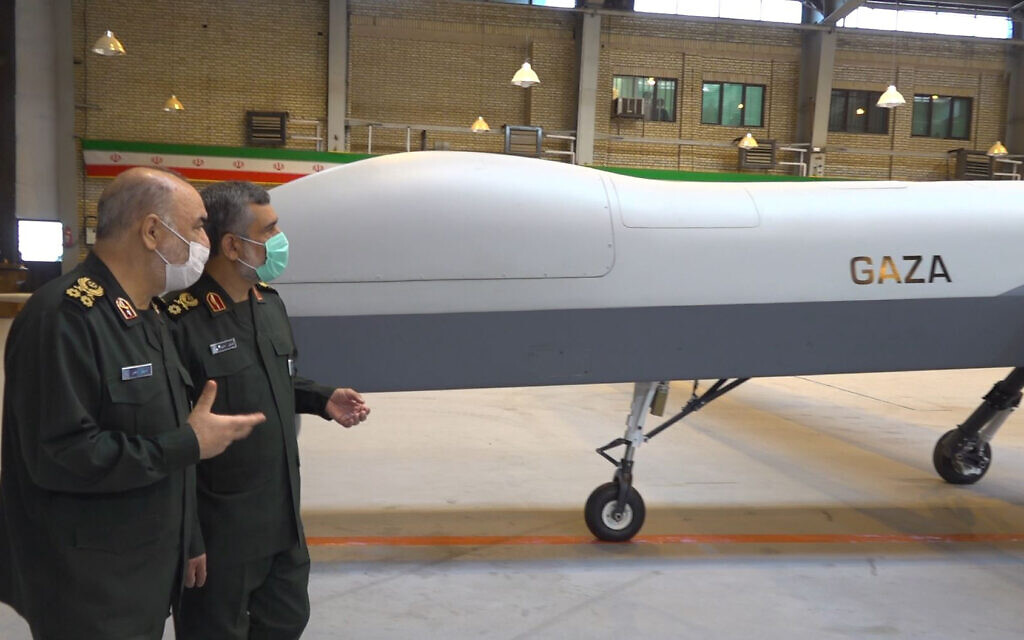 The Quds Force of the elite Revolutionary Guards (IRGC), responsible for Iran’s controversial operations abroad, is increasingly using drones as the main means for carrying out airstrikes and supplying proxies, an exiled opposition group said Wednesday, echoing comments made last week by Prime Minister Naftali Bennett at the UN.

The National Council of Resistance of Iran (NCRI) said the drones were being manufactured at eight plants in Iran, sometimes using materials smuggled from abroad, and then sent to countries like Iraq and Syria where they are assembled and then deployed.

The NCRI, the political wing of the People’s Mujahedin (MEK), which is banned in Iran, said it based its findings on reports from the network of supporters the MEK claims to maintain inside the country.

It supplied images that it claimed were of drone production plants, but it was not immediately possible to independently verify the claims.

The Quds Force, which was led by commander Qassem Soleimani until his killing in a US strike in Iraq in 2020, is accused by the West of leading Iranian operations in Iraq, Syria and Yemen and seeking to strike Western targets.

The NCRI said the Quds Force is “chiefly using various unmanned aerial vehicles (UAVs) for its terrorist operations as well as for supplying its proxies in the region.”

“To an extent, the regime is trying to compensate for its outdated and decrepit air force with this technology,” it added.

It said that to produce the drones, Iran has been smuggling some of the main parts, such as engines and electronic components from China, as well as raw materials from Turkey and South Korea.

It said there is now a specialized UAV Command among the five command units of the IRGC Aerospace Force. The UAV Command has several groups that are stationed at various bases across Iran.

The Quds Force brings members of pro-Iran terror militias abroad to Iran for training in the use of drones. The equipment is sent outside Iran by air via Mehrabad Airport in Tehran, by land concealed in trucks and, in the case of Yemen, by sea, it said.

It said that in the Syria conflict, where Iran has intervened to bolster the regime of President Bashar Assad, the IRGC has “consistently” used drones to identify and attack Syrian opposition forces.

During his speech at last week’s UN General Assembly in New York, Bennett said that “just this year, Iran made operational a new deadly terror unit, a startup: swarms of killer UAVs armed with lethal weapons that can attack any place any time.”

The prime minister added: “They plan to blanket the skies of the Middle East with this lethal force. Iran has already used these deadly UAVs — called Shahed 136 — to attack Saudi Arabia, US targets in Iraq and civilian ships at sea, killing a Brit and a Romanian. Iran plans to arm its proxies in Yemen, Iraq, Syria and Lebanon with hundreds, and then thousands of these deadly drones.”