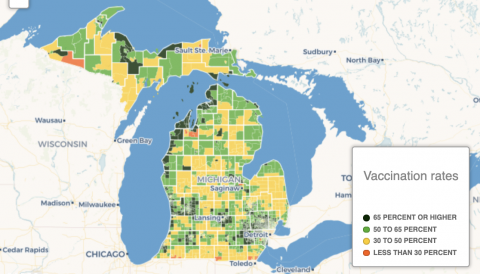 Bay County and Battle Creek officials said that, despite local, state and national campaigns, many remain fearful of the vaccine or believe bad information they’ve heard on social media or from friends.

“There still is that fear and misinformation,” Stewart said.

“Economically, it makes no sense at all not to get vaccinated,” he said. “They’re willing to gamble with it and that’s distressing.”

But there are still many demographics that have set aside fear.

Over 72 percent of those 65 and older — by far the most likely to die if they contract COVID-19 — are fully vaccinated in Michigan, state records show.

In Albion in southwestern Michigan, Rod Auton, administrator of the nonprofit Albion Health Care Alliance, said his team of 17 ambassadors is still going door-to-door, trying to make the sale.

It is slow going; a recent event generated fewer than 10 vaccinations, he said.

In Albion, between 32 percent and 48 percent of people are vaccinated, according to census tract data. All areas have a lower percentage of college grads. In 2020, the city supported Biden.

“We know we just have to stay focused and provide good information,” Auton said.

But aware that many of the hesitant are more likely to listen to family and friends or their employers than local health officials, they’ve come up with postcards with two local doctors — one white and one Black — pointing out the value of the vaccines.

They’re sending them across Albion and into neighboring townships, with the postcard of the Black doctor targeted to African-American communities and the white doctor to white communities.

The alliance is hoping the postcards will work, Auton said. But like Strasz, he’s looking for that perfect argument, that key piece of information that will unlock hesitancy. So far, he hasn’t found it.

“We’re still trying to figure out that magic,” Auton said.