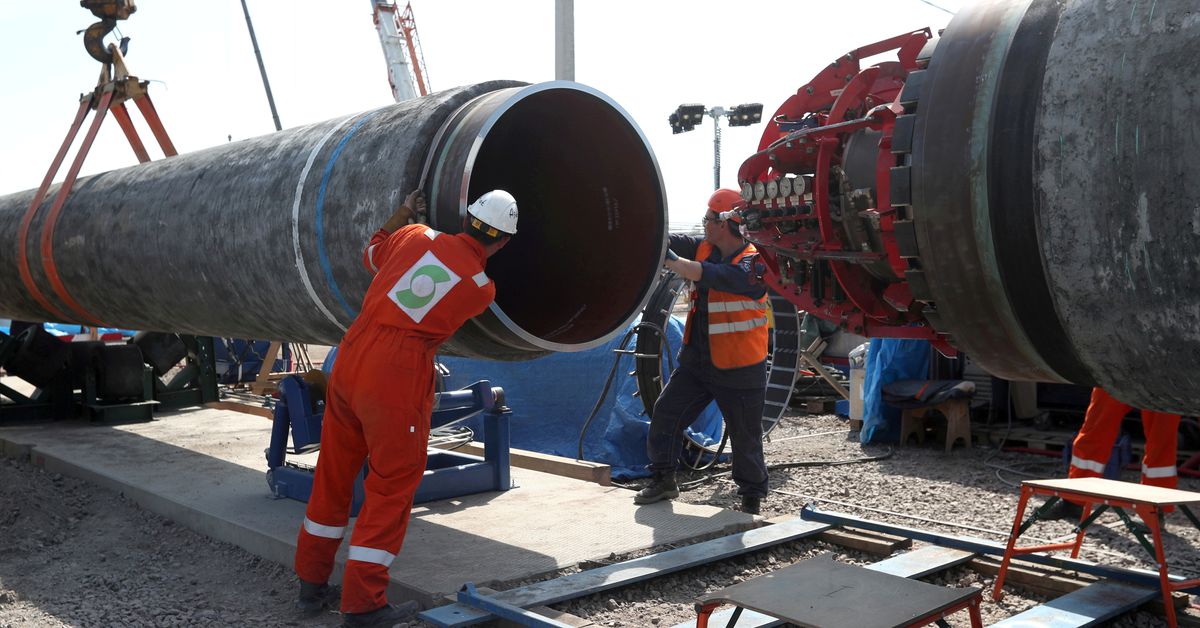 Oct 6 (Reuters) – Soaring energy prices caused alarm among European leaders and sent shivers through global markets on Wednesday, raising concerns of a winter fuel crisis that could play into the hands of gas-rich Russia.

U.S. oil prices briefly touched their highest in almost seven years and natural gas prices were at record levels as China and other big consumers struggle to cope with demand that has bounced back more quickly than expected from the COVID-19 downturn.

In Europe, natural gas prices have rocketed almost 600% this year on worries that current low storage levels will be insufficient for the winter. While in the United States, natural gas futures recently hit 12-year-highs.

Uncertainty over whether surging energy prices will spur inflation and interest rate rises hit global equity markets and bonds in Europe, particularly Britain, where several energy companies have collapsed as a result of the price surge.

“I think we have to be very clear that the gas prices are sky-rocketing,” EU Commission president Ursula von der Leyen said, calling for a renewed focus on renewables.

The EU, which imports 90% of its gas, notes that Russia had not followed the lead of its other main supplier, Norway, in stepping up supplies, von der Leyen said on Tuesday.

President Vladimir Putin said on Wednesday Russia was boosting gas supplies to Europe and stood ready to stabilise the market.

But the deputy CEO of Russian gas company Gazprom (GAZP.MM) was quoted as saying it was continuing to pump natural gas into underground storage facilities in Russia. Gazprom also said this week it would prioritise its home market over export sales because it expected a cold and snowy winter.

Some EU parliamentarians have alleged that Gazprom has not stepped up gas supplies to try to force swift approval for Nord Stream 2, a newly-built pipeline that will send Russian gas to Germany. The United States and some European nations oppose the project, saying it will make the EU even more dependant on Russian fuel.

“There is absolutely no Russian role on what is happening on the gas market,” Putin’s spokesman Dmitry Peskov told reporters.

“There is no question that we need to take policy measures,” EU energy commissioner Kadri Simson told a debate on the issue in the EU’s parliament.

Some EU governments have already rolled out national subsidies and other measures, saying these are the best way to cushion consumers against high bills.

Simson said underground gas storage was more than 75% full across Europe, and countries have enough to cover their winter needs but that the price surge showed the need to quickly switch to renewables.

But EU gas stocks are at a 10-year low. And in Britain, which has left the EU, and where around 80% of homes are heated using gas, storage capacity is currently equivalent to around four-to-five days of winter gas demand, down from 15 days previously.

The Brent crude oil benchmark dropped on Wednesday after hitting a multi-year high above $83 a barrel, but some traders said it was a temporary reprieve.

“An energy crisis is unfolding with winter in the northern hemisphere still to begin,” Stephen Brennock of oil broker PVM said.

Reporting by Reuters bureaux around the world; writing by Philippa Fletcher; editing by Jane Merriman