The head of the International Energy Agency said Russia has the capacity to send substantially more gas to Europe and alleviate the energy crisis gripping the continent, in an intervention likely to bolster claims that the country is withholding crucial supplies.

Fatih Birol, the executive director of the IEA, told the Financial Times that the agency’s own analysis suggested Russia could raise exports by roughly 15 per cent of peak winter supply to the continent.

Speaking the day after President Vladimir Putin hinted at a boost to shipments, Birol urged Russia to prove it is a “reliable supplier” by helping alleviate a supply crunch that has rocked energy prices and threatened the global recovery from pandemic lockdowns.

“If Russia does what it indicated yesterday and increases the volumes to Europe, this would have a calming effect on the market,” he said. “I don’t say they will do it but if they wish so, they have the capacity to do it.”

The IEA, which is primarily funded by OECD countries to advise on energy policy and security, first said last month that it believed Russia could boost supplies to Europe but without specifying by how much.

Gas prices have been climbing for months, and shot higher on Wednesday on the growing prospect of supply shortages over the winter. But a 40 per cent gain in UK prices quickly snapped back to a 9 per cent drop on the day after Putin hinted at larger supplies. 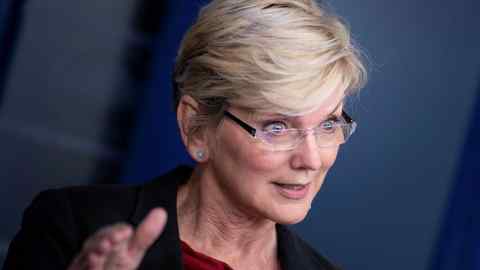 Gazprom said Putin’s comments had a calming effect on Russian producers and European consumers alike. “We all let out a sigh of relief in agreement and said ‘Thank God!’” Elena Burmistrova, head of Gazprom’s export arm, told a conference in St Petersburg on Thursday.

Burmistrova said the turmoil in gas markets threatened the stability of the regional economy and proved that the long-term contracts Gazprom was pushing were a safer option.

“Buying gas at acceptable prices is good, of course, but it’s even better to know for sure in advance how much it’s going to cost a month, a quarter, or a year from now,” she said. “We can all see on markets how much that unpredictability can cost us.”

Russia has repeatedly stressed it has fulfilled its long-term contracts but has also indicated more sales could be made available once the Nord Stream 2 pipeline to Germany is approved. That has stoked suspicions from Ukraine and other eastern European countries that it is trying to use higher prices to ensure the project’s speedy approval.

The line, which runs through the Baltic Sea, will bypass Ukraine, which turned away from Moscow to the west after a 2014 revolution and has fought a war against Russia-backed separatists in its east ever since.

Dmitry Peskov, Putin’s spokesman, said on Thursday there was “potential” to increase supplies to Europe, and hinted strongly that Nord Stream 2 was the best way to do it.

Alternative supply routes “work brilliantly and are much more high-tech and ecological”, Peskov said, according to Interfax.

Jennifer Granholm, the US energy secretary, said this week that the US was “carefully” watching Russia’s role in the European gas crunch, including assessing whether Gazprom was manipulating the market.

The IEA’s Birol said Russian exports were not solely responsible for the tightness in supplies. The rapid economic rebound from the pandemic, prolonged maintenance at various projects and weather conditions have also played a role, he said. But he cautioned that soaring prices would damage the industry’s long-term future.

“Very clearly the gas market is not getting good marks from consumers around the world,” Birol said. “It has been presented globally as a clean reliable source to complement the energy transition, but it may be casting a shadow on this image.”

Birol said governments needed to insulate consumers from the surge in prices in the short term, but added that record prices should also accelerate the transition away from fossil fuels.

Video: Jennifer Granholm on the challenges of transition to cleaner energy sources

Energy is the world’s indispensable business and Energy Source is its newsletter. Every Tuesday and Thursday, direct to your inbox, Energy Source brings you essential news, forward-thinking analysis and insider intelligence. Sign up here.