The Health Ministry on Thursday announced a pilot program to perform COVID-19 PCR tests using saliva samples rather than nasal swabs, aiming to find a less uncomfortable method to check for the coronavirus.

The test has already been used this week at the Rabin Square test facility in Tel Aviv. It was developed by Dr. Amos Danielli of Bar Ilan University’s Faculty of Engineering, and is carried out with help from the Health Ministry’s central lab for viruses and the Defense Ministry’s Directorate of Defense Research & Development.

The pilot program is running for two weeks. Participants will take a double test — both the swab and the saliva sample — and both methods will then be compared on several categories, including the validity of the results, safety and comfort. It was not immediately specified how the saliva would be taken for testing.

After hundreds of such tests are carried out, the results will be examined and authorities will decide whether to begin performing the new test permanently.

The development came as Israel continued to see a slide in COVID-19 infections that officials hope indicates the country’s fourth wave of coronavirus cases is waning. Health Ministry figures from Thursday morning showed that 2,369 new COVID-19 cases were diagnosed the previous day, with 2.3 percent of tests giving a positive result.

Active cases dipped further to 33,044 and serious cases continued their decline to reach 475, but the number of patients defined as critical grew to 235. 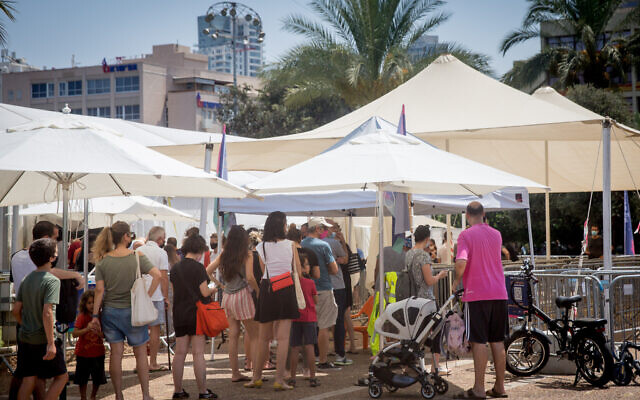 Updated rules entered effect this week regarding the Green Pass, a document that grants access to public venues for those who are either inoculated against COVID-19, or have recovered from it, or have recently tested negative.

A temporary Green Pass can also be obtained through a negative virus test, which must be paid for unless the individual is not eligible for vaccination. It is only valid for a few days at most.

Vaccination, with the recommended regimen being three doses, is a central plank of the government’s response to the coronavirus wave.

Israel — the first country to officially offer a third dose — began its COVID-19 booster campaign on August 1, initially rolling it out to those over the age of 60. It then gradually dropped the eligibility age, eventually expanding it to everyone aged 12 and up who received the second shot at least five months ago.