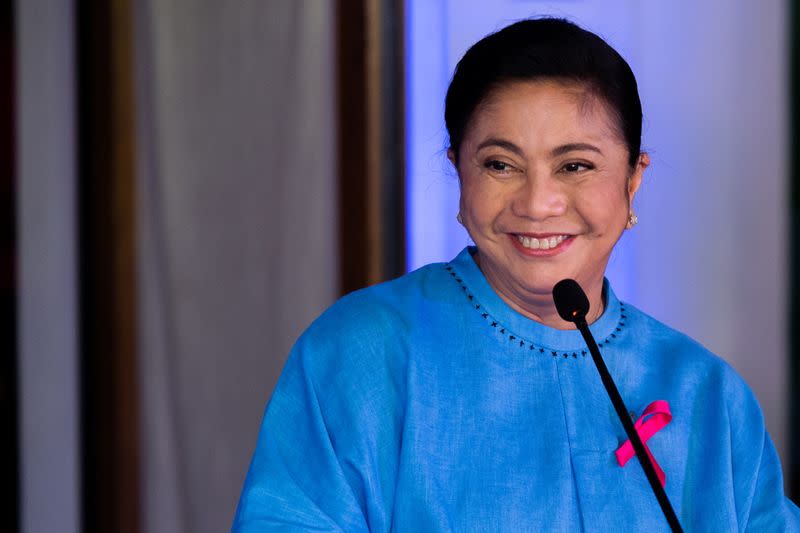 MANILA (Reuters) -Philippine Vice President Leni Robredo, a staunch critic of President Rodrigo Duterte’s brutal war on drugs, joined the race for president on Thursday, promising to usher in a government that cares for the people, not personal interests.

Robredo, 56, who was elected separately from Duterte and was not his running mate, said her decision was a difficult one but she wanted to be of greater service to a country facing unprecedented health and economic shocks.

“If we truly want to liberate ourselves from this situation, we should change not just the surnames of those in power; the corruption, the incompetence, the lack of compassion must be replaced by competence and integrity in leadership,” said Robredo, who is running as independent candidate.

Robredo will face at least four other candidates who have made their presidential runs official, including the son and namesake of the late dictator Ferdinand Marcos https://www.reuters.com/world/asia-pacific/son-late-philippines-strongman-marcos-run-presidency-media-2021-10-05, whom she beat by a slim margin in the 2016 vice presidential contest.

Duterte can not run for president in the election in May next year due to rules on term limits. He had said he would run for vice president but announced on Saturday he would retire from politics https://www.reuters.com/world/asia-pacific/philippine-president-duterte-says-he-is-retiring-politics-2021-10-02.

Candidates have until Oct. 8 to register. Duterte’s daughter, Sara Duterte-Caprio, who political analysts expected to join the race at the eleventh-hour, just as her father did in 2015, insisted on Wednesday she wanted to remain mayor of Davao city.

Robredo’s backers, including another prominent Duterte critic, former Supreme Court Justice Antonio Carpio, have for months been urging her to run with a “Let Leni Lead” battle cry.

They cheered her decision and promised support.

Soon after her announcement, hashtag #LabanLeni2022 (FightLeni2022) became the top trending Philippine item on Twitter, while supporters posted photos of themselves on social media wearing pink, the colour associated with Robredo.

“What is at stake are the lives and the future of the Filipinos … billions upon billions of pesos went into questionable contracts while millions of Filipinos struggle,” said Robredo, taking a swipe at the government over questions on its use of $1.3 billion in pandemic funds.

“The lack of good governance lies at the root of our many problems. This needs to end,” Robredo said.

The government had dismissed suggestions of wrongdoing.

Robredo, a congresswoman before becoming vice president, has been a thorn in Duterte’s side, questioning his war on drugs, his embrace of China and recently the handling of COVID-19.

Under Duterte, Robredo served as housing minister but quit https://www.reuters.com/article/us-philippines-politics-idUSKBN13T0IM after being excluded from cabinet meetings. After criticising what she called “senseless killings” in the war on drugs, Duterte appointed her “drugs tsar” but sacked her after 18 days https://www.reuters.com/article/us-philippines-drugs-idUSKBN1XY0BJ.

Duterte’s spokesperson, Harry Roque, asked about Robredo’s comments, said everyone had the right to stand for public office.

Aries Arugay, political science professor at the University of the Philippines, said voters disgruntled with the handling of the pandemic would gravitate towards Robredo who has been active in trying to respond to the health crisis.

“For voters negatively affected by the pandemic who think the government has failed, it’s a no-brainer to vote for Robredo,” Arugay told Reuters.

Should Robredo win the presidency, she would be the third woman to lead the Philippines after democracy champion Corazon Aquino in 1986 and Gloria Macapagal-Arroyo in 2001.