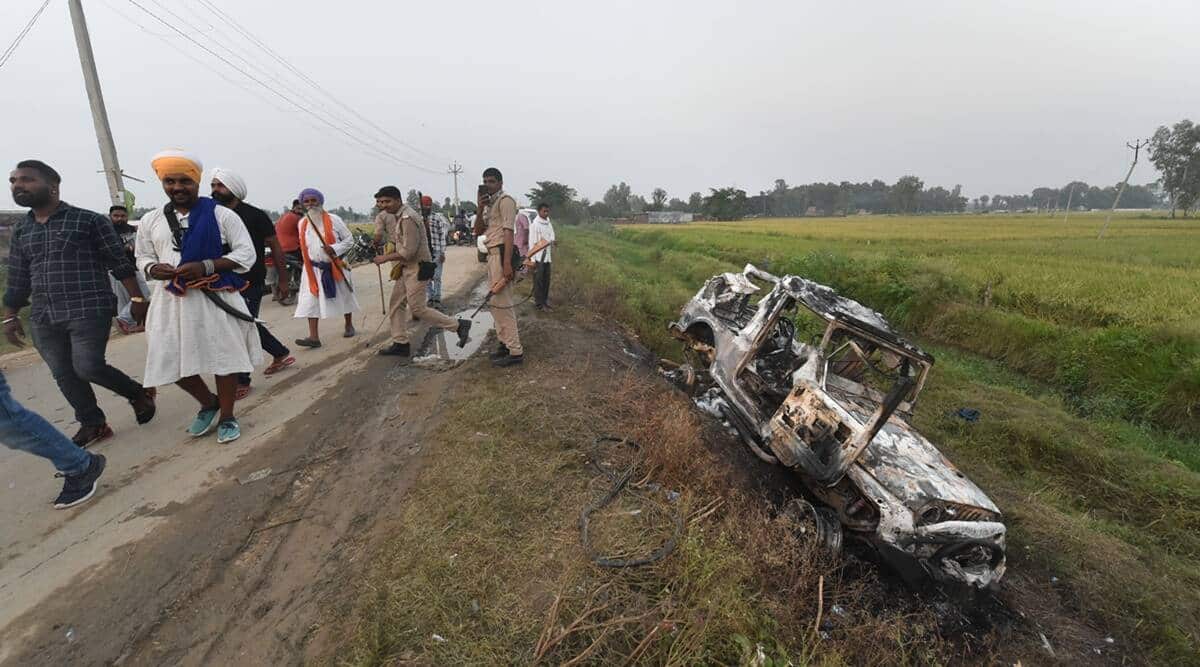 As per the supplementary cause list of the apex court, the matter has been registered as “In Re violence in Lakhimpur Kheri leading to loss of life”, has been registered “by court’s motion” in the category “Latter Petition and PIL Matters” and will come up for admission hearing before a bench of Chief Justice N V Ramana and Justices Surya Kant and Hima Kohli Thursday.

Sources told The Indian Express that the court has taken note of reports in the press as well as a letter written to it on the incident.

On Tuesday, two UP-based lawyers Shiv Kumar Tripathi and C S Panda wrote to the CJI seeking a court-monitored high-level inquiry into the incident. The letter urged the court to treat it as a Public Interest Litigation (PIL) and order the probe so that the guilty could be “brought to justice”.

However it could not be ascertained if the suo motu matter was registered taking cognizance of this letter.

Eight people, including a local journalist, were killed after a jeep rammed into protesting farmers in Lakhimpur Kheri on October 3. While the protestors have alleged that one of the vehicles was driven by the son of Union Minister and BJP MP Ajay Kumar Mishra, the Minister has said that his son was not even at the scene and that the incident occurred when the driver lost control after protestors attacked the vehicle.

Four protestors, a journalist, two BJP workers and the driver of the jeep were killed in the incident.

On October 4, the SC, while hearing a plea by a farmers organisation ‘Kisan Mahapanchayat’ seeking permission to hold protests at Jantar Mantar, had referred to the Lakhimpur Kheri incidents. A bench, headed by Justice A M Khanwilkar, had said that “nobody takes responsibility when such events happen”.

Justice Khanwilkar said this when Attorney General K K Venugopal, appearing for the Centre, remarked that “an unfortunate incident happened yesterday at Lakhimpur.”

The court also quizzed the farmers body as to what it was protesting against when the three farm laws had already been stayed by it and were not in operation.

“There is no act in place at the moment…it is stayed by court. Government has assured they will not give effect to it. The protest is for what?…What’s the point of protesting at Jantar Mantar?…You cannot do both – challenge a law and then go on protest. Either come to court or go to Parliament or go to Road…Once matter is sub-judice, how will protest go on on same issue?” the court had asked counsel for the Mahapanchayat.

The bench said it would examine whether someone who has already approached a Constitutional court seeking remedy for an issue has an absolute right to simultaneously protest on the streets on the same issue.

For over a year now, farmers’ groups have been protesting the passage of three laws — The Farmers Produce Trade and Commerce (Promotion and Facilitation) Act, 2020; The Essential Commodities (Amendment) Act, 2020; and Farmers (Empowerment and Protection) Agreement on Price Assurance and Farm Services Act, 2020.