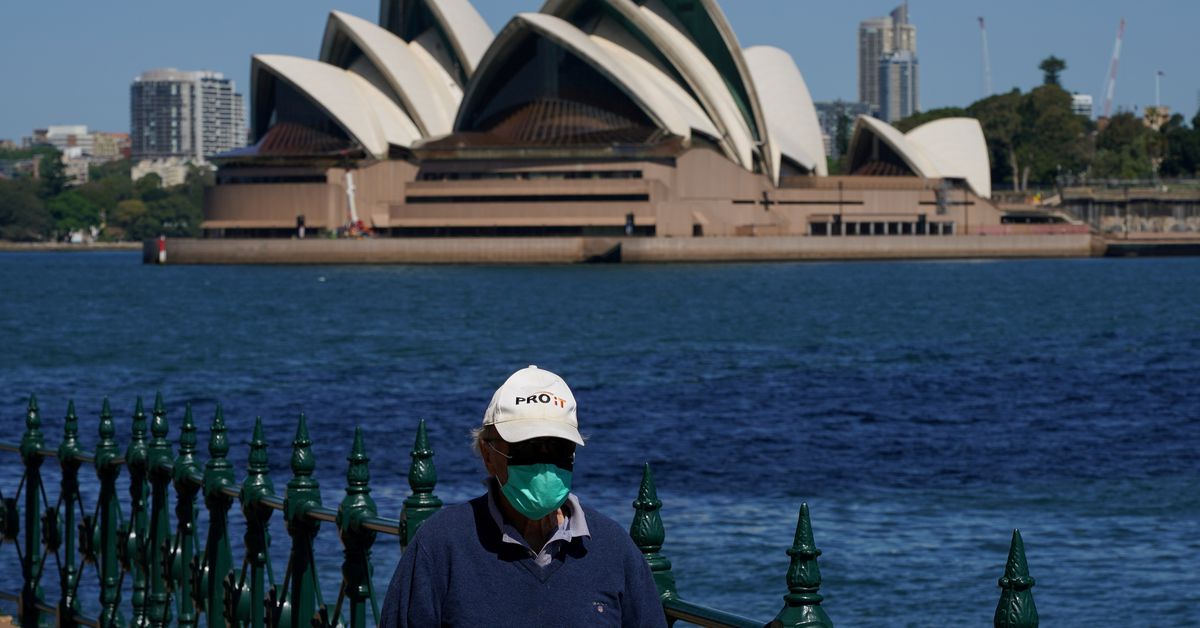 A person in protective face mask walks along the harbour waterfront across from the Sydney Opera House during a lockdown to curb the spread of coronavirus disease (COVID-19) outbreak in Sydney, Australia, October 6, 2021. REUTERS/Loren Elliott/File Photo

SYDNEY, Oct 8 (Reuters) – Australian doctors warned a too-rapid easing of COVID-19 curbs in Sydney could put pressure on health systems and risk lives, as the city prepares for key restrictions to be relaxed next week after more than 100 days in lockdown.

Stay-at-home orders are due to be lifted on Monday after New South Wales state this week hit its 70% target of full vaccination for its adult population, and owners of restaurants and other public venues are now scrambling to arrange supplies and staffing.

While an easing of restrictions on travel for Sydneysiders outside of their local government areas had previously been flagged, authorities on Thursday also decided to bump up permitted limits for home gatherings, weddings and funerals – earning the ire of the Australian Medical Association (AMA).

“New South Wales must not be reckless at this critical time,” AMA President Omar Khorshid said in a statement, adding that “too fast or too early” could result in avoidable deaths and the reintroduction of lockdowns.

State Premier Dominic Perrottet has defended his decision to bring forward the easing of several restrictions amid a steady fall in infections, saying the pandemic “is an economic crisis too”. read more

Officials have a staggered plan to ease limits on gatherings as full inoculation hits 70%, 80% and 90% of adults and while movement around the city will be permitted from Monday, restrictions on travelling to regional areas remain.

Stuart Knox, owner of Fix Wine, a downtown restaurant and bar, said it was exciting to be re-opening even if preparing was difficult.

“We’re still flying blind, we’ve got no idea as a CBD restaurant how many people are coming back and it’s all murky what we’re going to deal with,” he said.

He added he was still unsure how to check patrons’ vaccination status as required since a promised smartphone app was not yet operational.

Daily infections in New South Wales rose on Friday to 646 cases, the majority in Sydney, up from 587 on Thursday. They had previously fallen for the past seven days as first-dose inoculations in people over 16 near 90%. Eleven new deaths were registered.

“There is no indication that this new strain presents any differences regarding transmission, vaccine effectiveness or severity,” she said.

Victoria state logged a record 1,838 new cases on Friday, the highest number of any state in the country since the pandemic began, exceeding the previous high of 1,763 set three days earlier. There were five new deaths.

The Victorian premier, Daniel Andrews – one of the most vocal proponents of tough restrictions to rein in outbreaks – was fined A$400 ($300) on Friday for breaching the state’s mask mandate after media photographed him walking mask-free from his car to two news conferences this week.

“Whilst this was an oversight, oversights matter. Everyone needs to follow the rules and I am sorry it occurred,” the Australian newspaper quoted Andrews saying.

Australia is fighting a third wave of infections fuelled by the Delta variant. In addition to Sydney, Melbourne and Canberra have also had lockdowns imposed, forcing the closure of thousands of businesses.

The country’s cumulative COVID-19 numbers are, however, still far lower than many comparable countries, with some 122,500 cases and 1,405 deaths.

Neighbouring New Zealand, which had stayed largely virus-free for most of the pandemic until a Delta outbreak in mid-August, reported 44 new local cases, up from 29 on Thursday.