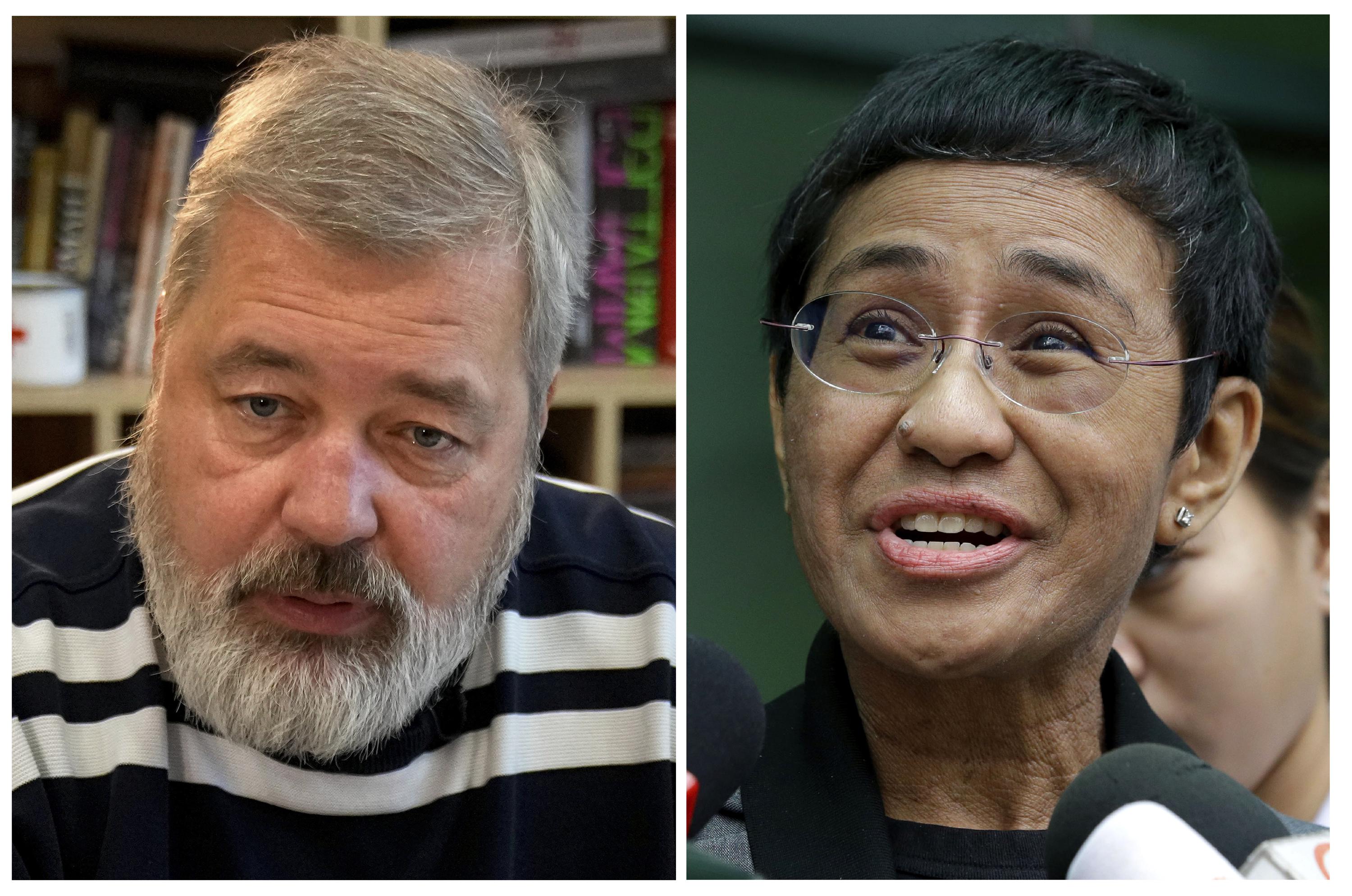 MOSCOW (AP) — Journalists Maria Ressa of the Philippines and Dmitry Muratov of Russia won the 2021 Nobel Peace Prize on Friday for their fight for freedom of expression in countries where reporters have faced persistent attacks, harassment and even murder.

Ressa and Muratov were honored for their “courageous” work but also were considered “representatives of all journalists who stand up for this ideal in a world in which democracy and freedom of the press face increasingly adverse conditions,” said Berit Reiss-Andersen, chair of the Norwegian Nobel Committee.

More on the Nobel Prizes

Ressa in 2012 co-founded Rappler, a news website that the committee noted had focused critical attention on President Rodrigo Duterte’s “controversial, murderous anti-drug campaign” in the Philippines.

She and Rappler “have also documented how social media is being used to spread fake news, harass opponents and manipulate public discourse,” it said.

Muratov was one of the founders in 1993 of the independent Russian newspaper Novaya Gazeta, which the Nobel committee called “the most independent newspaper in Russia today, with a fundamentally critical attitude towards power.”

“The newspaper’s fact-based journalism and professional integrity have made it an important source of information on censurable aspects of Russian society rarely mentioned by other media,” it added, noting that six of its journalists were killed since its founding.

Ressa, the first Filipino to win the peace prize and the first woman to be honored this year with an award by the Nobel committee, was convicted last year of libel and sentenced to jail in a decision seen as a major blow to press global freedom.

Currently out on bail but facing seven active legal cases, Ressa, 58, said she hopes the award will bolster investigative journalism “that will hold power to account.”

“This relentless campaign of harassment and intimidation against me and my fellow journalists in the Philippines is a stark example of a global trend,” she told The Associated Press.

She also pointed to social media giants like Facebook as a serious threat to democracy, saying “they actually prioritized the spread of lies laced with anger and hate over facts.”

Muratov, 59, said he sees the prize as an award to Novaya Gazeta journalists and contributors who were killed, including Anna Politkovskaya, who covered Russia’s bloody conflict in Chechnya.

“It’s a recognition of the memory of our fallen colleagues,” he said.

“Since the Nobel Peace Prize isn’t awarded posthumously, they came up with this so that Anya could take it, but through other, second hands,” Muratov said, referring to Politkovskaya.

According to the Committee to Protect Journalists, 17 media workers were killed in the Philippines in the last decade and 23 in Russia.

Muratov said he would use part of his share of the 10 million Swedish kronor (over $1.14 million) prize money to help independent media as well as a Moscow hospice and children with spinal muscular problems.

Former Soviet leader and 1990 Nobel Peace Prize laureate Mikhail Gorbachev used some of his award money to help fund what would become Novaya Gazeta. He congratulated Muratov on Friday, calling him “a wonderful, brave and honest journalist and my friend.”

Kremlin spokesman Dmitry Peskov also praised Muratov as a “talented and brave” person who “has consistently worked in accordance with his ideals.”

But Mikhail Ulyanov, Russia’s envoy to international organizations in Vienna, tweeted that Novaya Gazeta’s editorial policy “has nothing to do with strengthening peace” and that “such controversial decisions diminish the value of the Prize.”

Moscow-based political analyst Abbas Gallyamov said the award marked “a painful strike to the Russian authorities … because the freedom of speech and the principles of independent journalism are an evil in the eyes of Russian authorities.”

As part of a new crackdown on independent journalists in Russia, the government has designated some of them “foreign agents,” saying they received funding from abroad and engaged in undescribed “political activities.” Muratov said he asked government officials who congratulated him if he would now also receive that designation, but received no reply.

The state RIA Novosti news agency quoted lawmaker Alexander Bashkin as saying the Nobel Peace Prize wouldn’t fall under the definition of foreign funding under the bill on foreign agents. Hours after the prize announcement, the Russian Justice Ministry added nine more journalists to its list of foreign agents.

Referring to the hopes by many in Russia that the prize should go to imprisoned opposition leader Alexei Navalny, Muratov said he would have voted for him if he were on the committee, adding that “everything is still ahead for him.”

Some critics have questioned if honoring journalists respected the will of Swedish inventor Alfred Nobel and its original purpose to prevent war, but Reiss-Andersen said freedom of expression was essential to peace.

“Free, independent and fact-based journalism serves to protect against abuse of power, lies and war propaganda,” she said. “Without freedom of expression and freedom of the press, it will be difficult to successfully promote fraternity between nations, disarmament and a better world order to succeed in our time.”

She also cited the danger of misinformation and attacks on journalists by leaders denouncing them as purveyors of “fake news.”

Director Christophe Deloire called it “an extraordinary tribute to journalism, an excellent tribute to all journalists who take risks everywhere around the world to defend the right to information.”

“Journalism is in danger, journalism is weakened, journalism is threatened. Democracies are weakened by disinformation, by rumors, by hate speech,” said Deloire, whose group has worked with Ressa and Muratov to defend defend journalism in their countries and comes under regular criticism from authoritarian governments.

After the announcement, the Nobel committee itself was put on the spot when a reporter asked about its decision to award the 2019 peace prize to Ethiopian Prime Minister Abiy Ahmed, who has since become entangled in a domestic conflict with the powerful Tigray region.

“Today, I will not comment on other Nobel laureates and other issues than we have on the table today, but I can mention that the situation for freedom of press in Ethiopia is very far from ideal and is facing severe restrictions,” Reiss-Andersen said.

The Nobel Committee this week also made the following awards:

— The prize in physiology or medicine went to Americans David Julius and Ardem Patapoutian for their discoveries into how the human body perceives temperature and touch.

— The prize in physics went to three scientists whose work found order in seeming disorder, helping to explain and predict complex forces of nature, including expanding our understanding of climate change.

— The prize in chemistry went to Benjamin List and David W.C. MacMillan for finding an easier and environmentally cleaner way to build molecules that can be used to make compounds, including medicines and pesticides.

— The prize for literature went to U.K.-based Tanzanian writer Abdulrazak Gurnah, who was recognized for his “uncompromising and compassionate penetration of the effects of colonialism and the fate of the refugee.”

The prize for outstanding work in economics will be awarded Monday.

Read more stories about Nobel Prizes past and present by The Associated Press at https://www.apnews.com/NobelPrizes