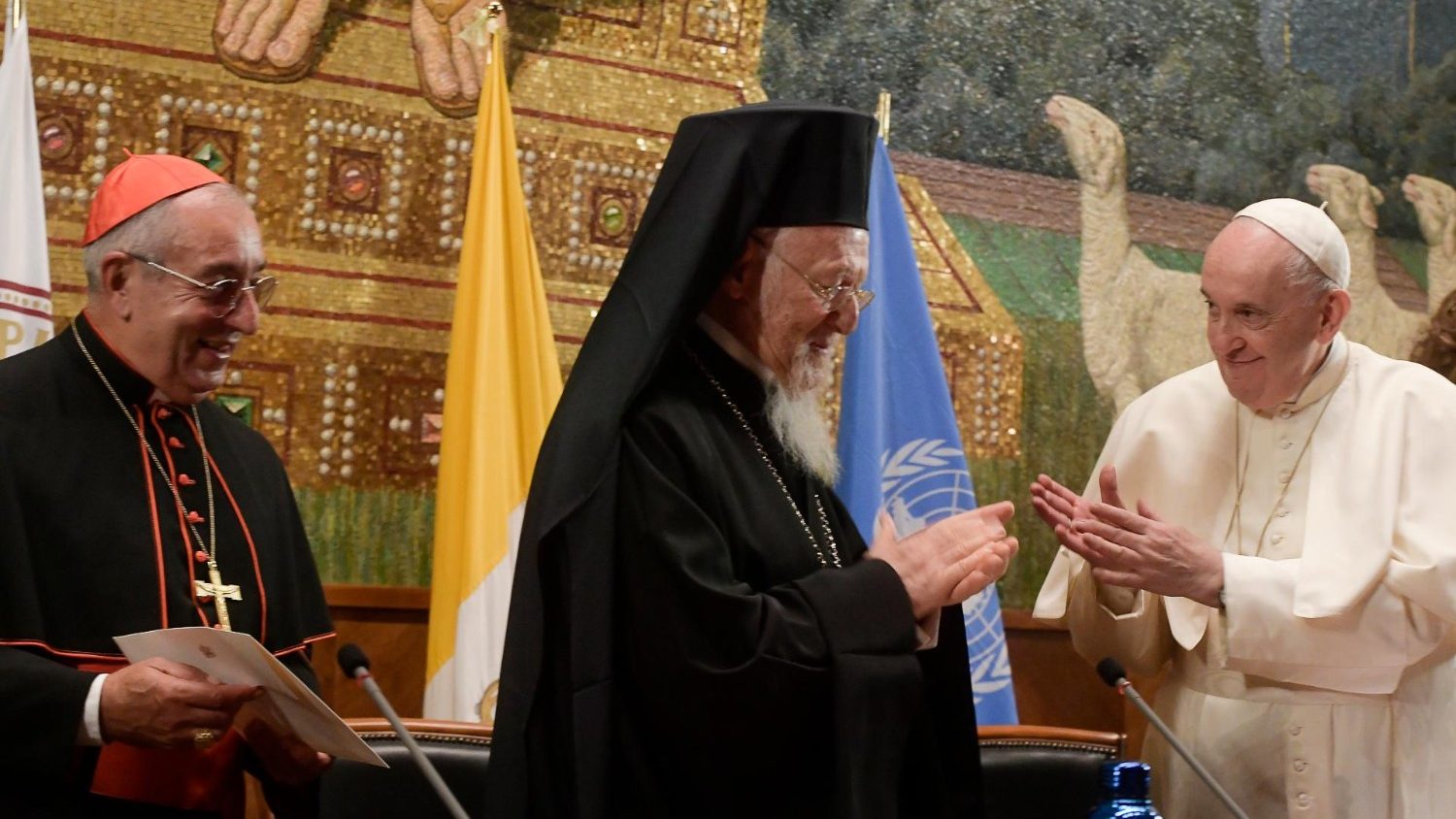 In the presence of Patriarch Bartholomew I and Audrey Azoulay, Director of UNESCO, Pope Francis issued a stark warning: As the COP26 conference draws nearer, he said, there is the awareness that “the harm we are doing to the planet is no longer limited to climate damage, water, and soil, but now threatens life itself on earth.”

In the face of this, he underlined, “it is not enough to repeat statements of principle that make us feel good.” No, he added, “the complexity of the ecological crisis, in fact, demands responsibility, concreteness, and competence.”

Speaking on Thursday morning at Rome’s Pontifical Lateran University, he recalled the “Faith and Science” event that took place in the Vatican this week and included the participation of scientists and representatives of different religions. He was struck, he revealed, by the words of one of the scientists who said, “My granddaughter, who was born last month, will have to live in an uninhabitable world if we don’t change things.”

Speaking in this place of learning, the Pope harked back to the original mission of ‘Universitas’, “where students and faculty come together to reflect and creatively work out new ways forward.” “The effort to form ecological consciousness and develop research to protect the common home passes through the Universities,” Pope Francis said.

Continuing on this point, the Pope underlined, “Academic activity is called to foster an integral ecological conversion in order to preserve the splendor of nature, first of all by reconstructing the necessary unity between the natural and social sciences with what is offered by theological, philosophical and ethical reflection, so as to inspire juridical norms and a sound economic vision.”

During his discourse, Pope Francis expressed his thanks to the United Nations Educational, Scientific and Cultural Organization (UNESCO), for its “active attention” to this Ecology and Environment initiative.

It is a path, he said, that will operate together with the Patriarchate of Constantinople with “an open perspective” capable of “welcoming the attention of the Christian Churches, the different religious communities, those who are searching and those who profess to be non-believers.” The cycle of studies, the Pope stressed, should therefore be a meeting point of experiences and thoughts, combining them through the method of scientific research. “The University not only shows itself to be an expression of the unity of knowledge but also the repository of an imperative that has no religious, ideological or cultural boundaries.”

Warning that expectations for the 2030 sustainable development goals are receding, Pope  Francis said “there is no ecology without an adequate anthropology. Without a true integral ecology, we will have a new imbalance, which will not only fail to resolve problems but will add new ones.”

Therefore, “the idea of a special cycle of studies,” the Pope underlined, “serves to transform even among believers the mere interest in the environment into a mission carried out by trained people, the fruit of an adequate educational experience. This is the greatest responsibility in the face of those who, because of environmental degradation, are excluded, abandoned, and forgotten.”

He continued by saying, “This is a work to which the Churches, by vocation; and every person of goodwill, are called to make the necessary contribution, becoming the voice of the voiceless, rising above partisan interests and not merely complaining.”

“Let’s abandon the yes it’s always been done this way,” the Pope said, “it is suicidal … Instead, we are called to do qualified work, which demands generosity and gratuitousness from everyone in order to respond to a cultural context whose challenges await concreteness, precision, and the ability to confront them.” Hence the invitation to “sow beauty and not pollution and destruction.”

Signing of the UNESCO Convention

At the end of the meeting, the Pope, along with the Patriarch and the Director of UNESCO, jointly signed the UNESCO Convention for the new cycle of studies in the “University of the Pope” on Ecology and Environment.