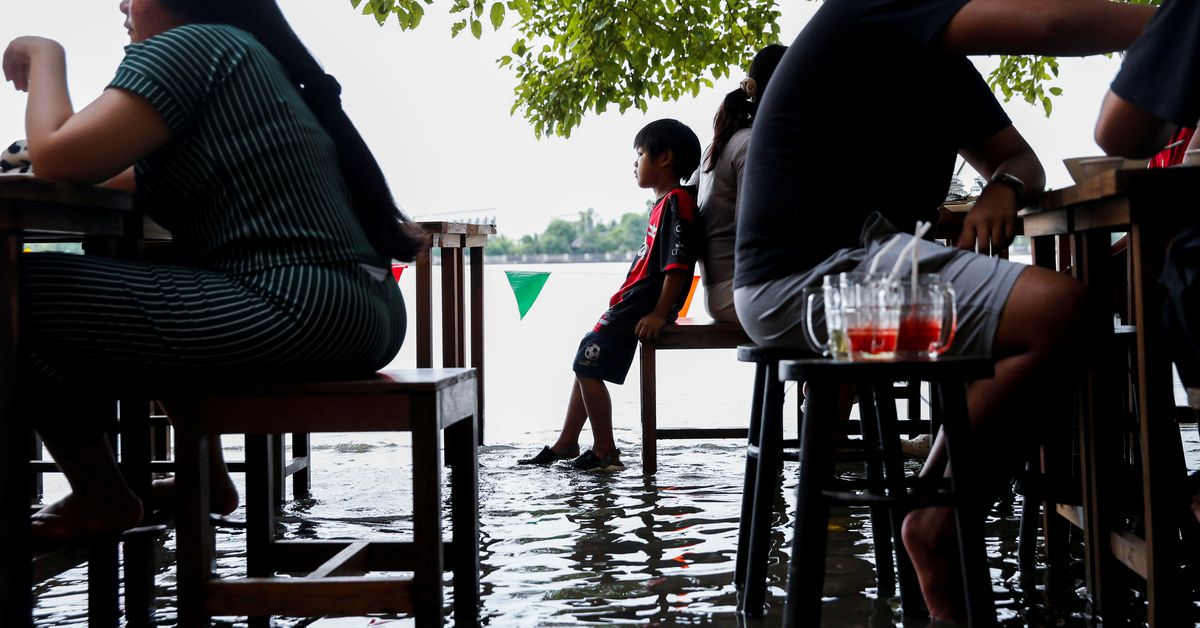 NONTHABURI, Thailand, Oct 7 (Reuters) – Riverside restaurant owner Titiporn Jutimanon was convinced a bout of flooding in Thailand could be the end of a business already struggling from the pandemic.

But with the rising tide of the Chao Phraya river this week came an unexpected opportunity.

Instead of closing for the floods, Titiporn’s eatery is making waves in Thailand, staying open for customers who are revelling in shin-deep dining, and the thrill of avoiding the rush of water set off as boats go by.

“What I thought would be a crisis turned into an opportunity.”

Videos have gone viral on social media of customers sitting on drenched chairs, taking mouthfuls of food as long-tail boats buzz by, then moving out of the way as waves hit.

People eat food at a flooded restaurant, where patrons stand up from their tables every time the waves come in, on a river bank in Nonthaburi near Bangkok, Thailand, October 7, 2021. REUTERS/Soe Zeya Tun

About 30 northern and central provinces have been hit by flooding in recent weeks, raising levels of the famous river that flows through Bangkok.

Titiporn’s business was forced to close during COVID-19 lockdowns, but she’s glad she decided to brave the floods.

“Not only do they love the atmosphere and the barbecue pork and the view of the sunset … the flood became an additional unique factor,” she said.

“I feel so lucky that the customers love it, the flood wasn’t a challenge for them to come.”

Customers cheer and laugh as their wooden stools are knocked over by the water that breaches the restaurant.

It holds two sittings each day for diners to enjoy the experience when the water levels are highest.

“It’s a fun challenge – you don’t know if you’ll get washed away somewhere while eating,” joked customer Jetdanai Boonrod, 30.