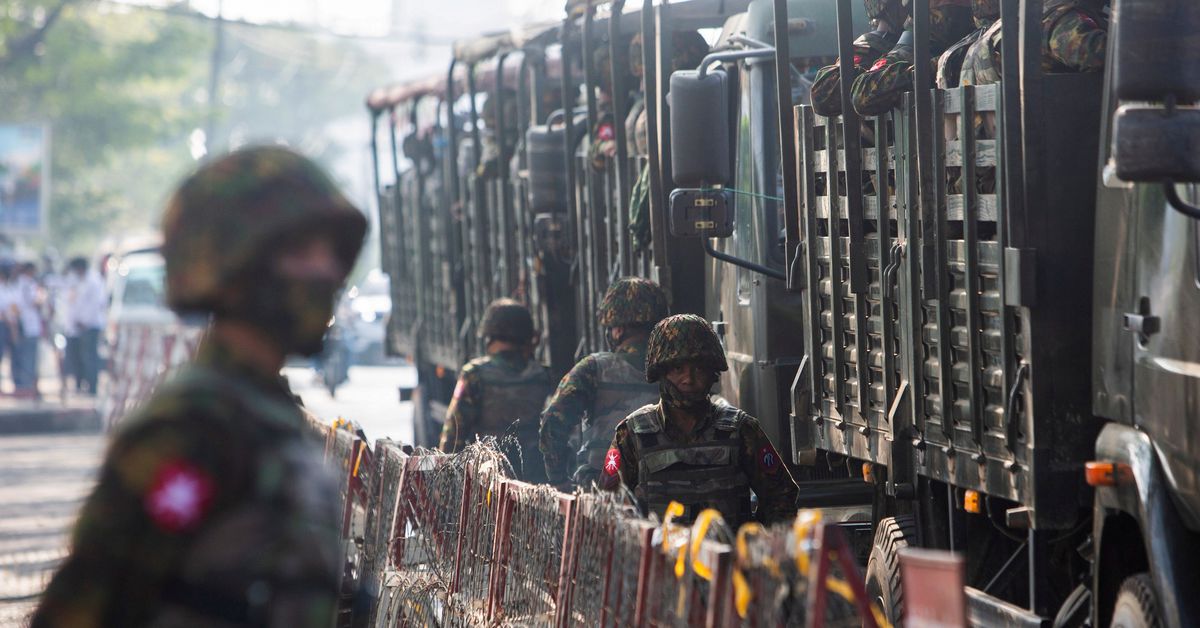 Soldiers stand next to military vehicles as people gather to protest against the military coup, in Yangon, Myanmar, February 15, 2021. REUTERS/Stringer/File Photo

GENEVA, Oct 8 (Reuters) – The United Nations human rights office said on Friday it is concerned the military in Myanmar could be preparing an imminent attack aimed at its opponents amid a build-up of heavy weapons and troops in areas of the country where the internet has also been shut down.

Ravina Shamdasani, U.N. human rights spokeswoman, said that it had documented intensifying attacks by the army in the past month in Chin state and other areas, with killings and burning of houses, in an apparent attempt to seek out armed resistance.

“What has happened now over the past few days, we have seen a real reinforcement, a substantial deployment of heavy weapons and troops in these areas,” Shamdasani told a U.N. briefing in Geneva, referring to townships in Chin, Sagaing and Magway.

The violence and build-up have led to the office of U.N. rights chief Michelle Bachelet becoming “very alarmed and concerned that there may be an imminent attack, a very serious attack against the civilian population”.

Two high-level commanders have been deployed to the area, she said.

A spokesperson for the junta did not immediately respond to a request for comment.

Myanmar has been in turmoil since a Feb. 1 coup led by military chief Min Aung Hlaing that ended a decade of tentative democracy. The return of military rule has prompted outrage at home and abroad.

Shamdasani urged influential countries to act to prevent further serious human rights violations. She cited estimates from local organisations that 1,120 people have been killed in a crackdown by security forces on pro-democracy strikes and protests since February.

The junta says that estimate is exaggerated and members of its security forces have also been killed.