The Syrian Observatory for Human Rights said the two foreigners were killed in the raid on the T-4 airbase late Friday, but their nationality was not immediately clear.

The official Syrian news agency SANA earlier said that, “at around 9:00 p.m., the Israeli enemy… fired a volley of missiles towards the T-4 military airport.”

“The aggression wounded six soldiers and led to some material damage,” it added.

The attack targeted a drone depot at the base, according to the war monitor, a pro-Syrian opposition organization of uncertain funding based in the UK.

Contacted by AFP, an Israel Defense Forces spokesperson said the military does not comment on foreign media reports. 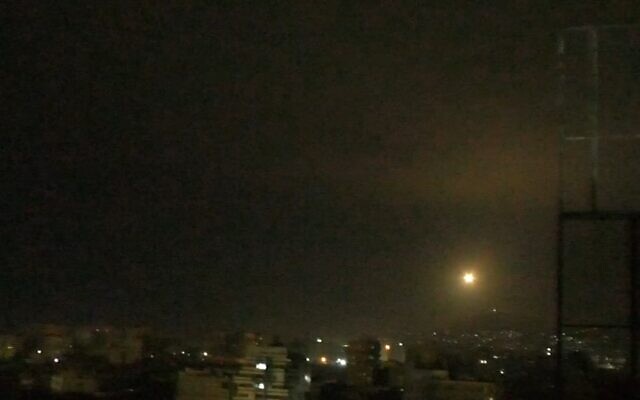 Illustrative: A Syrian anti-aircraft missile is fired into sky near Damascus during an alleged Israeli airstrike on January 6, 2021. (Screen capture: SANA)

The airbase has been struck multiple times in recent years, allegedly by Israel.

Israeli defense officials have claimed in the past that the base is used by Iranian forces as part of the Islamic Republic’s efforts to entrench militarily in Syria, something Israel has vowed to prevent.

Since the outbreak of the Syrian civil war in 2011, Israel has launched hundreds of strikes against Iran-linked military targets in Syria, but rarely acknowledges or discusses such operations.