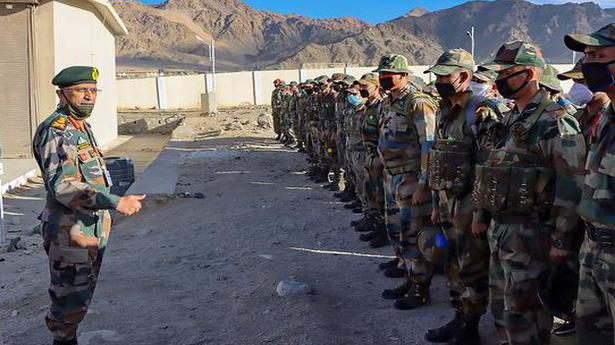 Ahead of 13th round of military talks, Gen. Naravane says build-up by China a matter of concern

As India and China are scheduled to hold the 13th round of Corps Commander talks on October 10, Army Chief Gen. Manoj Naravane said on Saturday that China is continuing its troops and infrastructure build up and if they stay though this winter season along the Line of Actual Control (LAC) in Eastern Ladakh it means that “we will be in a kind of LoC (Line of Control) situation though not an active LoC.”

The 13th round of Corps Commander talks will be held on Sunday at Moldo on the Chinese side, opposite Chushul, at 10:30am, a defence official said.

“Yes, it is a matter of concern that the large-scale build-up has occurred and continues to be in place, and to sustain that kind of a build-up, there has been an equal amount of infrastructure development on the Chinese side,” Gen Naravane said speaking at the Indian Today conclave. “So, it means that they (China) are there to stay. We are keeping a close watch on all these developments, but if they are there to stay, we are there to stay too,” he stated.

Gen. Naravane said that especially if they continue to stay there through the second winter, it “definitely mean that we will be in a kind of LoC situation though not an active LoC as is there on the western front.”

The focus of the next Corps Commander talks will be on an agreement for the next phase of disengagement from Hot Springs and also overall de-escalation along the LAC in Eastern Ladakh.

Officials said the agreement for disengagement at Hot Springs is within reach as partial disengagement has already been undertaken last year and there were a few points to be resolved. This leaves other friction areas of Depsang and Demchok which is going be tricky. The two sides have so far undertaken disengagement from Pangong Tso and Gogra areas.

Further, there is the issue of overall de-escalation along the LAC which is also going to be tough given the huge build up by China and matched by India. The People’s Liberation Army (PLA) still has over 50,000 troops deployed along the LAC in Eastern Ladakh, according to officials.

Stating that they cannot understand why China sort of opened one more front (in Ladakh) while it has problems on its other borders, Gen Naravane added, “But whatever it might have been, I do not think they have been able to achieve any of those because of the rapid response done by the Indian armed forces.”

Last week, during a visit to forward areas of Eastern Ladakh Army Chief Gen Manoj Naravane expressed confidence that through the talks they will be able to reach a consensus on how this disengagement is to take place and by and by all the friction points get resolved.

At the same time, he said that China has deployed troops in considerable numbers all across Eastern Ladakh and Northern front right up to our Eastern Command and added that they are quite well poised to meet “any eventuality.”

Sorgente articolo:
China is there to stay, says Army chief on Ladakh stand-off – The Hindu