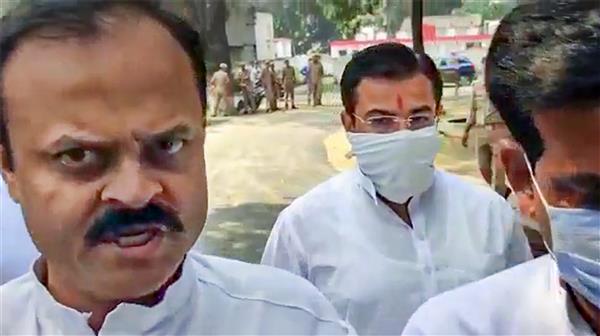 Union Minister of State for Home Ajay Mishra’s son Ashish Mishra was quizzed here on Saturday by an SIT of Uttar Pradesh police in connection with the Lakhimpur Kheri violence on October 3, a day after the Supreme Court expressed dissatisfaction over the state government’s action in the case.

Ashish Mishra appeared before the special investigation team (SIT) at around 11 am after a second summons was served to him the previous day when he did not turn up for interrogation.

The questioning by the SIT team headed by Deputy Inspector General of Police (Headquarters) Upendra Agarwal in the crime branch at the Police Lines was continuing even after 5 pm, sources said.

Meanwhile, additional security personnel were deployed at the site in the evening.

Ashish, popularly called Monu, arrived alone and went straight to the Lakhimpur Kheri police lines for questioning in the October 4 FIR that charges him with grave offences, including murder and criminal conspiracy.

The FIR registered on the complaint of one Jagjit Singh says that Ashish was in the Thar Mahindra SUV that mowed down farmers killing one on the spot on October 3, and that he also escaped into sugarcane fields firing shots.

The minister and his son have maintained innocence saying Ashish was not at the crime scene though the vehicles that rammed into farmers belonged to Ajay Mishra and his aides.

Ashish joined the probe under tremendous pressure from the farm unions who had given him an ultimatum to appear before October 12 or be ready for a massive offensive.

The Sikh congregations of Lakhimpur have planned the ‘antim ardas’ of the deceased farmers on October 12 and have been massively mobilising for this.

Farmer leaders had said that they would unveil the next action plan on October 12 if Ashish did not surrender and Ajay Mishra was not sacked.

Political pressure has also helped with Punjab Congress chief Navjot Singh Sidhu sitting on a fast until Ashish was arrested and he joined the probe.

As soon as Ashish arrived to join the probe there was a sense of relief among families of victims who have been waiting for justice.

Meanwhile, even as Ashish Mishra’s interrogation by UP crime branch personnel is under way, a massive mobilisation has begun at the local office of MoS Home Ajay Mishra.

A message had been circulated early on Saturday for workers to gather at the Lakhimpur Kheri headquarters of local MP Ajay Mishra. BJP workers have begun to gather at the office. — With agency inputs