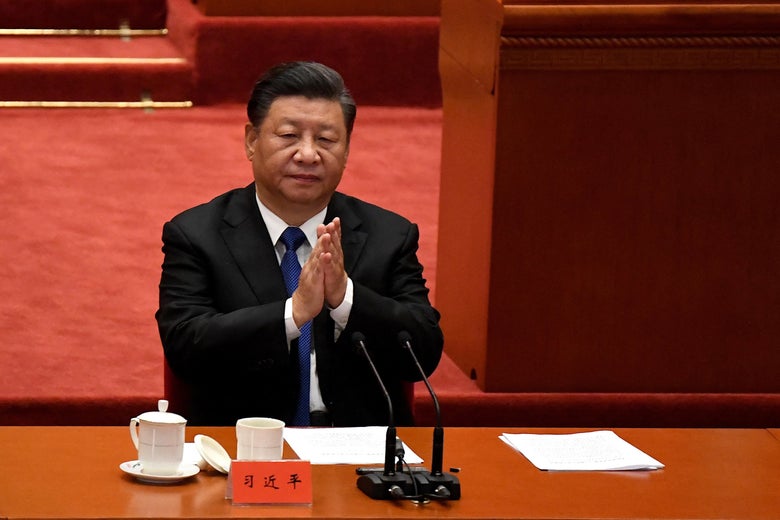 China’s President Xi Jinping vowed Saturday that his country would achieve “peaceful unification” with Taiwan at a time when tensions between Beijing and the island have been particularly high. Xi didn’t mention the possibility of using force to achieve the “reunification” but he spoke shortly after a record number of Chinese military jets conducted drills close to Taiwan.

“Compatriots on both sides of the Taiwan Strait should stand on the right side of history and join hands to achieve China’s complete unification,” Xi said. Speaking at an even to commemorate 110 years since the revolution that overthrew China’s last imperial dynasty in 1911, Xi said that “Taiwan independence separatism is the biggest obstacle to achieving the reunification of the motherland, and the most serious hidden danger to national rejuvenation.”

Xi’s words were slightly more conciliatory than in July, when he vowed to “smash” any efforts at formal independence for the island. But Taiwan still responded strongly, with Taiwan’s presidential office saying that the future of the island “rests in the hands of Taiwan’s people.” It also said Taiwan had clearly rejected the officer of unifying with China and instead supported “defending our democratic way of life.” Taiwan’s Mainland Affairs Council called on China to “abandon its provocative steps of intrusion, harassment and destruction.”

Even though China’s military exercises in recent days garnered lots of panicky headlines, the jets never crossed into Taiwan’s airspace. “Chinese President Xi Jinping and his generals may be haughty, but they don’t appear to be reckless.,” wrote Slate’s Fred Kaplan earlier this week, noting that the Chinese planes “have never flown over Taiwan’s actual airspace.” Still, the exercises led Taiwan’s Defense minister to say tensions with China are at their worst point in 40 years. These recent actions show how “the balance of power around Taiwan is fundamentally shifting, pushing a decades-long impasse over its future into a dangerous new phase,” notes the New York Times. Taiwan suddenly finds itself in the middle of the growing disagreements between China and the United States. “The Taiwan issue has ceased to be a sort of narrow, boutique issue, and it’s become a central theater—if not the central drama—in U.S.-China strategic competition,” Evan Medeiros, who served on President Obama’s National Security Council, tells the Times.