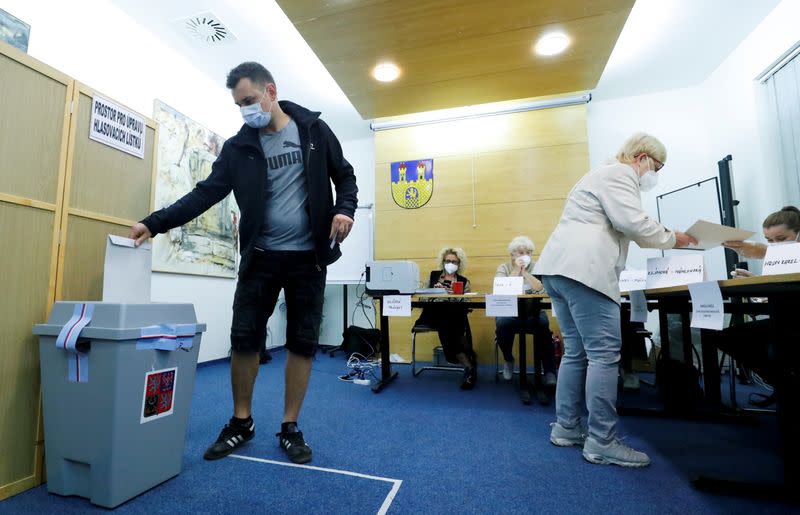 By Michael Kahn and Robert Muller

PRAGUE (Reuters) – Czech voters evicted the communists from parliament on Saturday for the first time since the end of World War Two, voting out a party whose forebears ruled the central European nation from 1948 until the Velvet Revolution of 1989 that ushered in democracy.

The communists jailed tens of thousands in forced labor camps in the 1950s and brutally repressed dissidents such as playwright-turned-president Vaclav Havel, but remained in parliament following the revolution.

In this week’s election https://www.reuters.com/world/europe/czechs-vote-final-day-election-pm-babis-seeks-cling-power-2021-10-08, the Communist Party of Bohemia and Moravia took 3.62% of the votes with nearly all precincts reporting, less than the 5% needed to enter parliament and potentially marking a final chapter for a party that has gradually shrunk as its ageing membership dwindled.

“It pleases me, it pleases me a lot,” Jiri Gruntorad, 69, a former dissident who signed the dissident Charter 77 statement and was jailed for subversion from 1981 to 1985 by the communist authorities, told Reuters. “But it’s coming too late.”

“It was one of the last communist parties in the world apart from the Chinese and Cuban ones that held on to its name. The others have at least renamed themselves and started behaving a little differently.”

After 1989, the communists sought to appeal to senior citizens and working class Czechs but they never resonated with younger voters and failed to shake the party’s history with others as a totalitarian rulers who had stifled freedom.

“I am very disappointed because it is a really big failure,” said Communist Party leader Vojtech Filip, who also resigned.

Havel opposed banning the party — which resisted the country’s European Union and NATO membership and kept warm ties with Russia and China — despite calls from the public to do so.

The communists lingered mostly in isolation after 1989, though they cooperated with other parties seeking votes to pass legislation in parliament. They were also close to current President Milos Zeman.

The party regained influence in 2018 when Babis — a former Communist Party member — leaned on them to support his minority government with the Social Democrats.

It was the closest the party came to power since 1989 but appears also to represent their final act as a political force in the former Soviet-bloc nation.

“I am overjoyed that this era is now over – not only for those of us still living, but also for those who have passed away and who were persecuted by the regime,” said Hana Palcova, 74, who left the country under threat from the secret police.