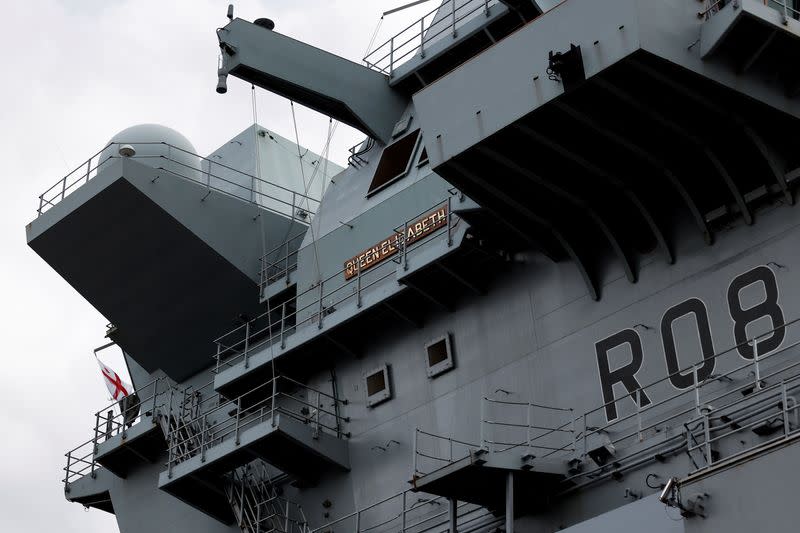 SINGAPORE (Reuters) – Britain’s new aircraft carrier the HMS Queen Elizabeth made a stop in Singapore on Monday, part of a move to reassert itself globally and boost its military presence in Asia amid rising competition among major powers.

The Queen Elizabeth led a British carrier strike group in exercises with Singapore’s military at the weekend, including naval manoeuvres and simulated combat training with F-35B stealth fighters and F-16 jets.

Britain plans to permanently deploy https://www.reuters.com/world/uk/britain-permanently-deploy-two-warships-asian-waters-2021-07-20 two warships in Asian waters, where the United States and Western allies are trying to contain China’s militarisation and island-building in seas vital to the movement of trillions of dollars of global trade.

“Our recent integrated review highlighted the importance of the Indo Pacific and the UK’s intent to tilt here and have an increased footprint, and much more persistent presence,” strike group commander, Commodore Steve Moorhouse, told Reuters aboard the new 65,000-tonne vessel.

“What better way to just show that off in the first instance, with Queen Elizabeth deploying here for her first operational deployment.”

Singapore is one of more than 40 countries the strike group will interact with through visits or exercises during its global deployment, according to a British government statement.

Britain, like China, now has two aircraft carriers, compared to the United States’ 11. The $4 billion Queen Elizabeth is the largest warship built by the British military and is roughly the length of three soccer fields at 274 metres (900 feet).

The Queen Elizabeth travelled to Japan https://www.reuters.com/world/uk/britain-shows-off-queen-elizabeth-aircraft-carrier-anxious-japan-2021-09-06 last month to mark the start of the permanent military presence, which came as the United States, Britain and Australia agreed a trilateral regional defence pact, AUKUS https://reut.rs/3DtQQ5X.

In recent years, China has controversially deployed coastguard ships all over the South China Sea and built manmade islands with missile systems, to assert vast territorial claims that an international arbitral ruling has declared invalid.

China earlier this month made the largest ever incursion https://www.reuters.com/business/aerospace-defense/taiwan-reports-largest-ever-incursion-by-chinese-air-force-2021-10-02 with its air force into the Taiwan’s air defence zone.