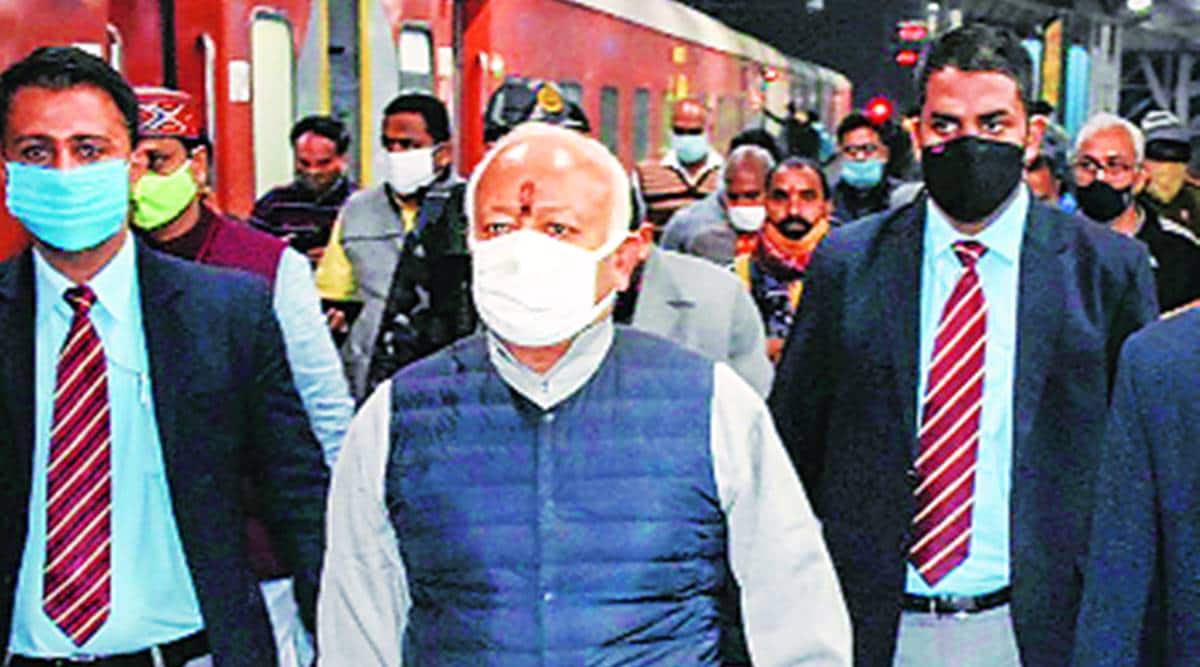 RSS CHIEF Mohan Bhagwat on Sunday said that Hindus who were converting to other religions for marriage were committing a wrong. He said this was happening for small selfish interests and because Hindu families were not giving their children the values of pride for one’s religion and traditions.

“Humko iska sanskar ghar mein dena padega. Apne swa ke parti gaurav. Apne dharm ke prati gaurav. Apne puja ke prati aadar. Uske liye prashn aayenge to uttar dena. Confuse nahi hona (We need to give them these values at home. Instilling pride in our self, our religion and respect for our praying traditions. If there are questions asked, answer them, don’t be confused), he said.

Bhagwat’s statements on conversion come at a time when several BJP-ruled states have brought laws against alleged “love jihad” or what they call religious conversion for marriage. These laws are understood to have been brought under pressure from the RSS.

Bhagwat spoke at length about Indian family values and preserving them. He also raised the issue of how at most RSS events, only men were visible.

“The aim of RSS is to organise Hindu society. But when we organise RSS programmes, we see only men. Now if we want to organise the whole society, then it has 50% women,” he said.

Bhagwat said Indians had always shared their wealth with others. He said India had a lot of wealth until the Mughals came.

“From 1st Century to the 17th century – before the Mughal loot of the country started – India was economically the most prosperous country in the world. That is why it was called the golden bird,” Bhagwat said.

The RSS chief also spoke about the need for parents to be careful about what their chidren were watching on OTT platforms.

“The OTT platforms show all kinds of things. What comes in the media is not with the perspective of what will good for children and for our value system. We have to teach our children what to watch and what not to at home,” Bhagwat said.

Extolling virtues of Indian family system, Bhagwat said the West was studying Indian family system. But added that there were forces working to destroy these values. “To keep people enslaved, West sent opium to China. The youth got addicted to opium and then the West ruled China. In our country too this is happening. When you see drug cases and where these drugs are coming from you will know where it is coming from and why. And who is benefiting from it,” he said.