Morning show anchors Paula and Leon Rosenberg, a real couple in life and work who host the eponymously named daily show “Paula and Leon,” went on air without makeup Sunday morning, in what they said was a first for Israeli television hosts.

The show, screened five days a week from 9:30 to 11:30 on Channel 12, features the couple as they interview guests about health, diet and consumerism.

Paula Rosenberg invited her followers on Instagram and Facebook to watch the show on Sunday morning at 9:30 a.m., and asked viewers to respond with a heart emoji if they wanted Paula and Leon to continue without makeup, or with an angry face emoticon if they wanted them made up.

“We’re not saying it is forbidden to put on makeup, or to comb your hair,” wrote Paula Rosenberg.

“Our message is: Hi, take a look, this is what a woman and a man look like and it’s cool and it’s beautiful before all the repairs.”

Rosenberg pointed to society’s unrealistic expectations for how one is meant to look, as well as a lack of respect for peoples’ bodies and appearances, and the links it can have to depression, anxiety, eating disorders and abuse. 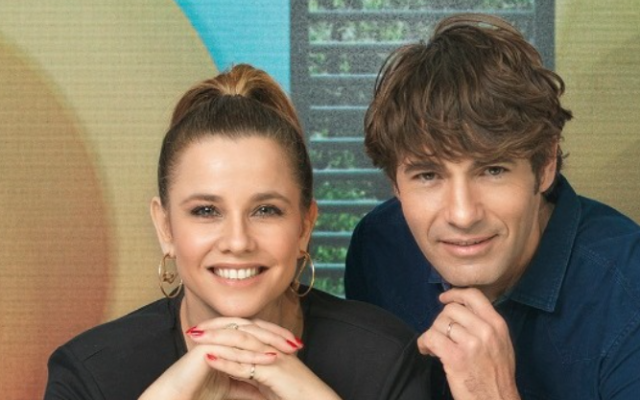 Paula and Leon Rosenberg, hosts of Keshet 12 morning show, who went without makeup on Sunday, October 10, 2021, protesting societal expectations of how people should look (Courtesy Keshet 12)

“Scroll right, this is my picture now in the cab, at the time of writing this post. I clicked and that’s it,” wrote Rosenberg on Instagram. “I haven’t even combed my hair yet. It is important that we can all think this way about ourselves so as not to waste a large part of our lives in self-hatred.”