Israel has issued permits that legalize the status of 442 undocumented Palestinians in the West Bank and Gaza on Monday, in the first mass approval of illegal residents in years, the Palestinian Authority announced on Monday.

The Palestinian Authority Civil Affairs Commission, which is formally charged with liaising with Israel, announced that the group consisted of Palestinians whose families had failed to register them before they turned 16, thus making the process far more complicated.

The Israeli military’s liaison to the Palestinians, widely known by its acronym COGAT, declined to comment. Defense Minister Benny Gantz’s office also declined a request for comment, although the announcement tracks with previously announced policy.

In August, Gantz met with Palestinian Authority President Mahmoud Abbas, the first such public meeting between high-level Israeli and Palestinian officials in over a decade. Following the meeting, he announced a series of confidence-building measures between Ramallah and Jerusalem — including the legalization of thousands of undocumented Palestinians who live in the West Bank and Gaza.

The Palestinian Authority cannot issue valid identity cards without coordinating with Israel. In most cases, such as registering births and deaths, the process goes smoothly.

A large number of people updating their family reunification data requests at the civil affairs offices. Who is telling the truth? The people who cling to their right and are destined for achievement, no matter how small it is or the slogan sellers!! https://t.co/KExqjMwzFu

Palestinians and their spouses who remain in the West Bank despite lacking a legal ID card live tightly constrained lives, fearing deportation at every Israeli roadblock.

“Even if I was inside Nablus, I was scared — because I never knew when the army might come and ask for my papers and deport me,” said Mohammad al-Jurf, a 40-year-old Palestinian who went to Nablus’s Civil Affairs office on Monday to receive an official document saying his request had been approved.

Al-Jurf was born in Nablus in 1981, but didn’t register to receive a formal identity card until he was 18 — too late to apply by normal methods. Instead, he was told to submit an application to apply through family unification with his West Bank Palestinian parents.

His application was interrupted by the Second Intifada, which saw Israel largely freeze the approval process for family unification. Al-Jurf remained stateless and undocumented inside the West Bank for the next two decades. He said he has rarely left Nablus and has never traveled outside the West Bank.

“It’s really amazing. I don’t even know what to say — I’ve never felt this way before,” said al-Jurf, who hopes to receive his identity card from the PA Interior Ministry within the week.

Tens of thousands of undocumented Palestinians are thought to live in the West Bank, facing deportation or arrest if caught. The most common case is thought to be family unification. According to High Court rulings, Israel is not obligated to approve those requests, although it sometimes has authorized Palestinian spouses as a humanitarian gesture or through agreements with the Palestinian Authority. 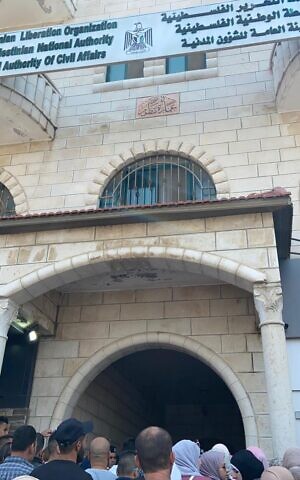 During the 1990s, the Israeli government set a yearly quota for family unification approvals, peaking at around 4,000. But following the outbreak of the Second Intifada in 2000, Israel reduced ties with the Palestinian Authority and effectively shut down the family unification process.

Israel last opened the issue as a goodwill gesture to the Palestinian Authority in 2007, examining some 50,000 outstanding requests and approving 32,000, according to court filings.

But the government apparently never returned to the quota system, approving only five applications between 2010 and 2018. The Palestinian Authority — in what some described as a protest of the freeze — also appeared to cease transferring requests at all, deepening the bureaucratic thicket.

Gantz and other center-left Israeli officials in the new government have vowed to strengthen the ailing Palestinian Authority and minimize the impact of the conflict on Palestinian daily life. Prime Minister Naftali Bennett also supports strengthening the PA and its economy, although he has ruled out working to establish an independent Palestinian state.

Sorgente articolo:
Israel said to approve residency for hundreds of undocumented Palestinians – The Times of Israel