Drones delivered sushi, beer and ice cream orders to waiting members of the media right off the Tel Aviv coast on Monday as part of a government-led initiative to create a national drone network and pilot drone flights for deliveries across Israel.

The National Drone Initiative entered the third of eight planned phases in the pilot program last week, launching a 10-day demonstration to test drone flights above urban areas in Tel Aviv, Jaffa, Ramat Sharon, Herzliya and Hadera, where the second phase of the project launched in late June.

In this new stage, the drones will have carried out around 300 flights a day above open areas for different tasks such as testing the autonomous systems, analysis of in-air behavior, delivering food at a drop-off point, and even delivering donated blood from the Magen David Adom blood bank in the Tel Aviv area to the Sheba Medical Center at Tel HaShomer Hospital right outside the city.

The pilot project transforms Israel into a “beta site” for drone piloting and operations and aims to help players in the field — drone makers, retailers and regulators — understand what the skies will look like in the future as thousands of drones may be making their way above to fulfill various needs.

“We are getting closer to the day where we can order food, clothes, medicine, etc, via drones as part of a national network that will be economically viable for people and that will also help move some traffic from the road into the air,” said Daniella Partem, head of C4IR at the Innovation Authority, at the press event on Monday at the Ayalon Highways’ command center in Tel Aviv. 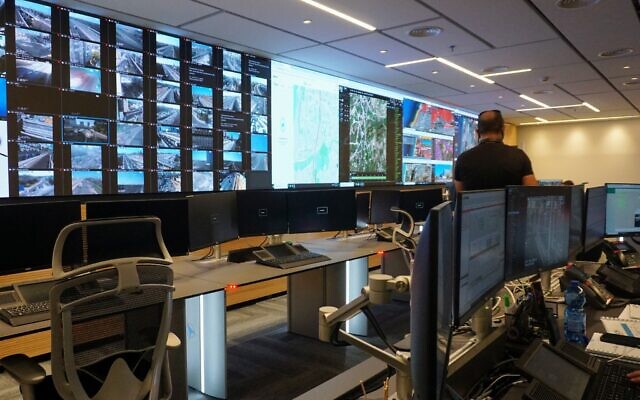 Monitors display information in a command center in Tel Aviv, on October 11, 2021, in a pilot run by the Israel Innovation Authority with partners to create a network of drone deliveries in Israel (Emanuel Fabian/Times of Israel)

Partem said the project was “being built gradually, step by step” to make sure all safety measures are in place to allow drones to fly simultaneously when performing different tasks. The challenges, she said, include concerns over flying near residential areas, large birds and noise, and addressing them is a work-in-progress.

“We are building the regulatory and tech infrastructure for companies to be able to operate in this network and make deliveries,” she said, noting that a majority of the participating drone companies were Israeli to “support the ecosystem in this government-industry collaboration.”

“We are creating a welcoming environment for the good of the people,” she added. 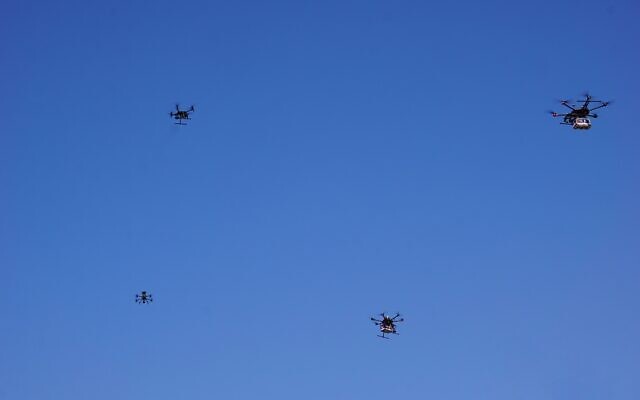 Drones flying near the city of Tel Aviv on October 11, 2021, in a pilot run by the Israel Innovation Authority with partners to create a network of drone deliveries in Israel (Emanuel Fabian/Times of Israel)

The gradual approach to building the network has allowed a “coordinated effort” that is now gaining pace, Sagi Dagan, Vice-President of Growth at the Israel Innovation Authority, told The Times of Israel on Monday.

“We are moving all together — the government, the regulators, the industry — and looking at all the challenges, putting them on the table and tackling them one by one. And we do this through testing and experimenting,” said Dagan.

One of the key characteristics of the project is the multitude of companies and parties invited to take part to create a competitive market that cannot be dominated by one player, Dagan added. 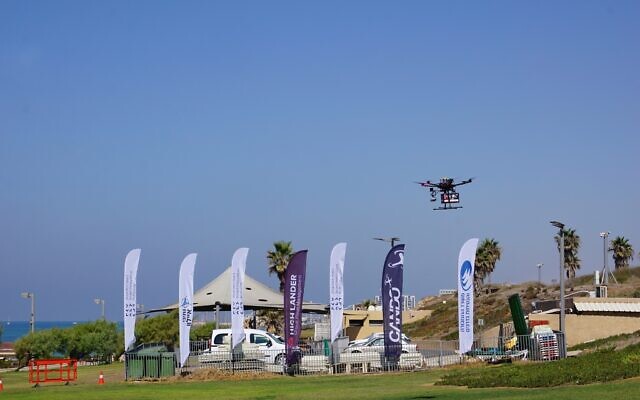 “We’re putting life and lanes in the air, in the 50-120 meters above ground,” Dagan said, adding that the initiative is garnering “a lot of interest from other countries and regulators, as we are now far ahead.”

“Israel has a competitive advantage in terms of the technologies, the drones and the air traffic management, all being co-designed through regulation and the market, and setting the new rules through work in the field. This is very unique,” said Dagan.

Partem noted that one of the reasons Israel can lead in these spaces is because of the military backgrounds of the many people involved in the initiative, including the founders of the drone companies piloting their tech with the project. 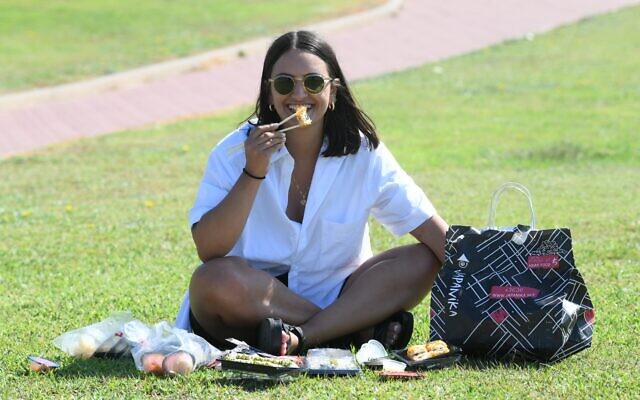 A woman eats a piece of sushi delivered by drone in Tel Aviv, October 11, 2021. (Idan Gross for Israel Innovation Authority)

At the Hatzuk beach in northern Tel Aviv on Monday, reporters, video journalists and other members of the press were treated to a live demonstration of how a sushi order could be delivered via drone; first by placing the order through an app and then waiting for the drone to travel the five kilometers (3.1 miles) to pick up the food and touch down at the drop off point back near the beach, as somewhat bewildered beachgoers looked on. A second drone also carried cold beer, and a third drone delivered ice cream later in the day at Charles Clore beach in southern Tel Aviv.

One sandy, elderly beachgoer was curious enough to hike the short distance from the shore to the grass-covered area where the demonstration was taking place, to take photos and videos and try to get a sense of what was happening. 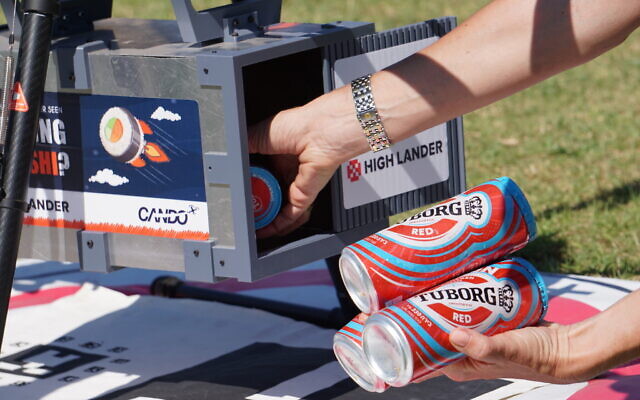 “This is really something, it is amazing. The world has changed so much. I’m getting older now, I’m sad that I won’t be around much longer to see what else the future has in store,” he told The Times of Israel.