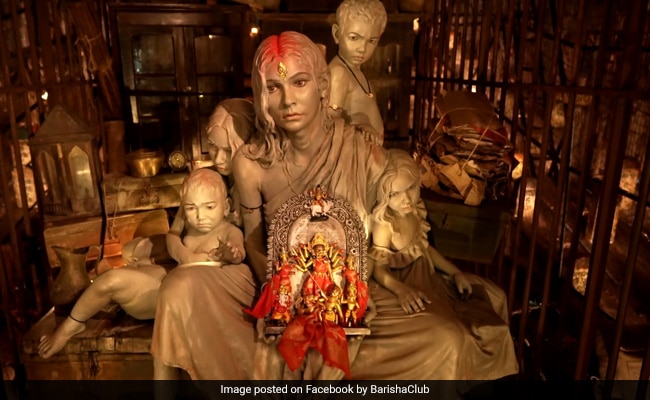 A Durga Puja pandal in Kolkata, West Bengal, highlights the plight of those excluded from the National Register of Citizens. South Kolkata’s Barisha Club has come up with the theme ‘Bhager Maa’ (Division of Mother) to focus on the subject of the National Register of Citizens and the hardships of migrants for this year’s Durga Puja pandal. The pandal, which last year depicted the migrant crisis, has become a big draw in the city.

This year, the pandal has been divided into two parts. While the left side depicts Bangladesh, the right side represents the Indian border. In between the two sides, in no man’s land, stands the sculpture of a woman carrying an idol of Goddess Durga. The woman, surrounded by her four children, embodies refugee families in detention camps. She sits inside a truck, all her earthly belongings scattered around her. Dusty portraits, a colourful saree on the floor and voter ID cards dangling from the ceiling form the backdrop of the installation, which aims to highlight the fears of the people over loss of citizenship.

West Bengal | South Kolkata’s Barisha Club has come up with the theme ‘Bhager Maa’ (Division of Mother) focussing around the subject of National Register of Citizens & the hardships of the migrants for this year’s Durga Puja pandal pic.twitter.com/r0xfRXQKrx

“Losing citizenship is like an existential crisis. The Partition and its human tragedy are far from forgotten in Bengal. I have tried to recreate that sense of loss at a time people are afraid of losing everything all over again,” said Rintu Das, the architect of the puja, told Telegraph India.

The final National Register of Citizens or NRC – a list intended to identify legal residents and weed out illegal immigrants from Assam – left out more than 19 lakh of the state’s 3.3 crore applicants in 2019, creating a huge political row. Taken together with the Citizenship Amendment Act, it triggered protests across the country which were cut short only by the outbreak of the Covid pandemic.

Last year, the Barisha Club had used the idol of a migrant mother as the Goddess to bring attention to the migrants who were forced to walk hundreds of kilometres home as the country went into a coronavirus-induced lockdown.

Pallab Bhowmick’s Ma Durga for the Pujo this year, as a migrant worker with her children.
Very evocative. pic.twitter.com/aAlJVI9XKO

Mr Das had said at the time that the migrant mother represented the Goddess. “The goddess is the woman who braved the scorching sun and hunger and penury along with her children… the indomitable spirit of the women walking home with children overwhelmed me. In my mind, they embodied the goddess,” he said.

This year, the sculpture was created by Debayan Pramanik, Pratap Majumdar and Sumit Biswas. The entire pandal was done up in monochromatic hues to project an atmosphere of gloom.