FIFA President Gianni Infantino on Monday said the signing of the Abraham Accords could eventually lead to Israel co-hosting the soccer World Cup with its Arab neighbors.

Infantino, who is making his first official visit to Israel, was speaking at the opening of The Friedman Center for Peace through Strength at the Museum of Tolerance in Jerusalem, a center set up by the former Trump-administration ambassador to Israel David Friedman.

Infantino said that soccer’s world governing body was looking at expanding the men’s and women’s tournaments into annual events and as such could see Israel co-host.

“Why can’t we dream of the World Cup in Israel and its neighbors?” he asked. “With the Abraham Accords, why should we not do it here in Israel with her neighbors in the Middle East and the Palestinians?”

Infantino also held up Israel’s national team, where Jewish and Arab Israelis play together, as an example of coexistence inspired by sports. 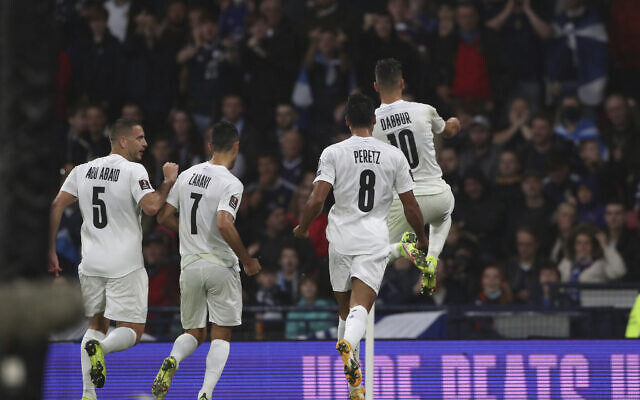 FIFA has been widely criticized for its first attempt to bring a tournament to the region, awarding the 2022 World Cup to Qatar. the move has been slammed due to Qatar’s poor human rights record and widespread allegations of corruption in securing the event.

Minister of Sports and Culture Chili Tropper, who met Infantino earlier in the evening, welcomed his remarks and said they discussed future cooperation between FIFA and Israel.

“The will to bring major international sporting events to Israel,” Troper said.

However, the FIFA chief’s participation in the event reportedly angered the Palestinians, who canceled a meeting between him and the head of the Palestinian soccer federation, Jibril Rajoub, in Ramallah, Army Radio reported.

The Palestinians were angry both over the association with a Trump official whose policies led to the Palestinians severing ties with the US, and the location at the Museum of Tolerance in Jerusalem.

The Palestinian Authority Foreign Ministry blasted the event, saying that Friedman is “notorious for his extremist positions and support for annexation, colonization and other crimes under international law in addition to his notorious efforts at denying the inalienable rights of the Palestinian people.”

The PA noted that the Museum of Tolerance was built on the site of Muslim graves: “One of the basic requirements for peace is respect of religious sites, maintaining their status quo, and their status, and in the particular case of the Mamilla cemetery, to allow for its restoration rather than to continue the process of desecration.” 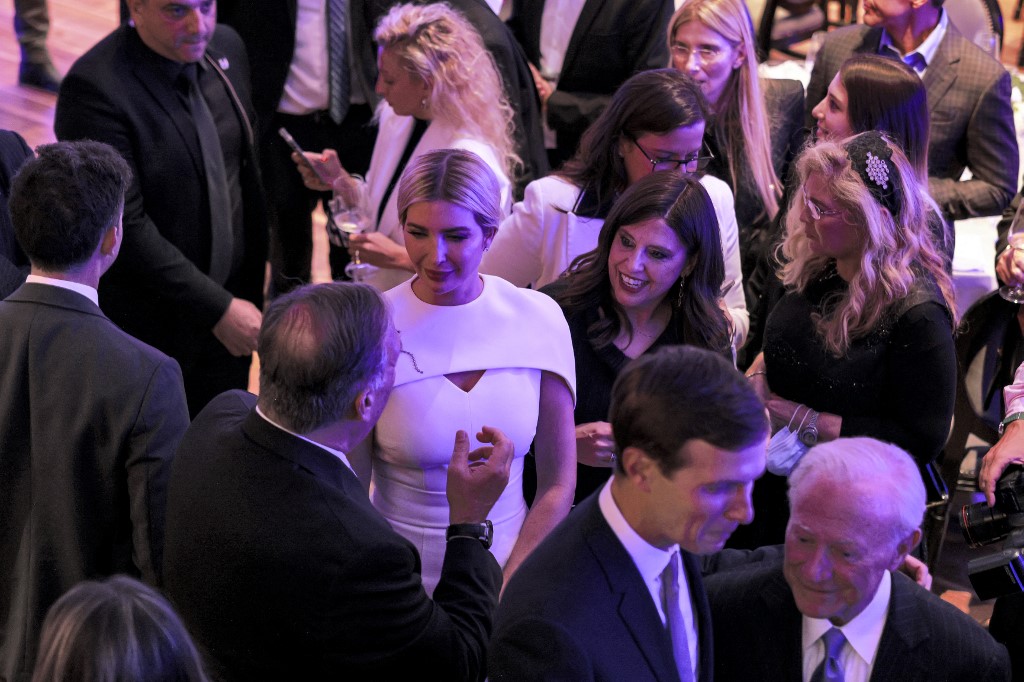 Ivanka Trump, businesswoman and daughter of the former US president, her husband Jared Kushner, and former US secretary of state Mike Pompeo attend the launch of the Friedman Center for Peace through Strength at the Museum of Tolerance in Jerusalem on October 11, 2021. (Menahem KAHANA / AFP)

The glitzy event was attended by Trump administration officials — including former secretary of state Mike Pompeo and former treasury secretary Steve Mnuchin — and Israeli officials, ambassadors, and businessmen. Benjamin Netanyahu, the prime minister during the signing of the Abraham Accords and currently the opposition leader, arrived late with his wife, Sara.

Earlier in the day, the Knesset launched a new caucus dedicated to the Abraham Accords.

Jared Kushner and Ivanka Trump were in attendance alongside Netanyahu, representing the since-ousted US and Israeli leaderships that signed the normalization agreements between Israel and the United Arab Emirates, Bahrain, Morocco and Sudan. 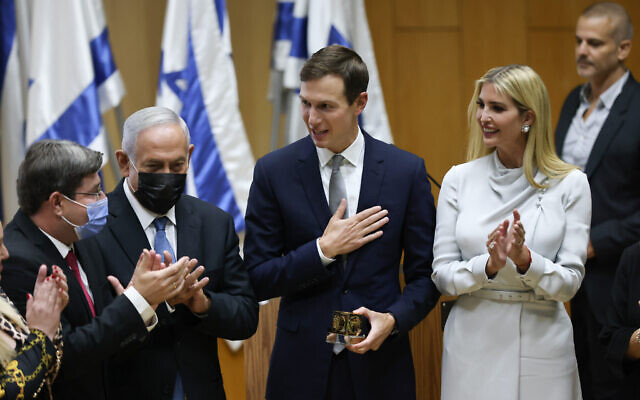 Netanyahu himself, who met Kushner and Trump in the Knesset before the event, said: “As long as people said peace can’t be made with the Arab world without peace with the Palestinians, we couldn’t have achieved peace. We broke the Palestinian veto and brought four historic peace deals.”