Southeast of Galwan Valley where 20 Indian and at least four Chinese soldiers died in clashes in June 2020, Hot Springs lies in the Chang Chenmo river valley, close to Kongka La, a pass that marks the Line of Actual Control. India’s Patrolling Point 15, it is not a launchpad for any offensive action though the area did see action before and during the 1962 war.

China’s unwillingness to pull back its platoon-sized unit from Hot Springs is a sign of the difficulties that lie in normalising the situation. The PLA has traditionally had a major base east of Kongka La. The pass also marks the border between two of China’s most sensitive provinces — Xinjiang to the north and Tibet to the south. Kongka La lies west of China’s G219 highway which connects Xinjiang and Tibet.

In the run-up to the 1962 war, an incident at Kongka La made the Indian government hand over the responsibility of the border in Ladakh to the Army. On October 20, 1959, a three-member Indian police patrol was detained by the Chinese at Kongka La. When the patrol did not return, another 20 personnel, led by a Deputy Superintendent of Police, set out the next day to find the three men.

As 16 of the 20 moved towards the Chang Chenmo river, they came under attack from the Chinese who used rifles, mortars and hand grenades. Nine of the search party were killed, and the rest arrested by the Chinese who treated them very harshly. A Chinese soldier also died in the clash. Immediately after the incident, the western sector was handed over to the Army on October 24. 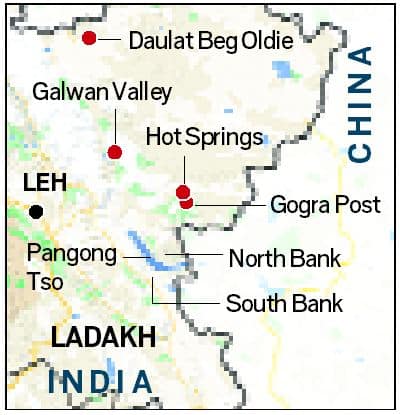 In 1962, China attacked Hot Springs even though it was not among the sectors that saw heavy fighting. Until 1960, China used to have a company stationed at Kongka La and Hot Springs which they increased to a regiment in the Hot Springs area by 1962.

When the war began, India had a platoon (around 30 soldiers) at Hot Springs. After China attacked India’s position in Galwan Valley, attention turned to the Chang Chenmo valley and Hot Springs. The Army instructed troops from the Hot Springs region to pull back after the Chinese began shelling the area and were in a position to cut them off. Indian soldiers tried to move back first to Tsogatsalu, and later to Phobrang. Moving their way along the Chang Chenmo river, almost all soldiers suffered from frostbite and chilblains.

Now, with the disengagement talks stalled, it creates a major hurdle in eventual de-escalation from the region where both sides have around 50,000 troops each, along with tanks, artillery guns, air defence assets. Hot Springs is the last of the friction points that the Army says came up last year when China moved its troops across the LAC. The other points were PP14 in Galwan Valley, PP17A in Gogra Post, and the north and south banks of Pangong Tso — disengagement has been completed at these places.

Sorgente articolo:
India-China standoff: Border point issue has a past, pullback there is key to de-escalation in region – The Indian Express