Likud MK Yuli Edelstein announced Monday that he’ll challenge Benjamin Netanyahu for the party leadership, confirming months of rumors that he intended to make the move.

Edelstein, a former Knesset speaker, health minister and No. 2 on the Likud list, made the announcement in an interview with Channel 12.

He said he made the decision to seek the party leadership “because the current government is simply dangerous for Israel.”

Noting that during the recent unprecedented run of four elections in two and a half years, Likud was consistently the largest party in the Knesset, Edelstein said, “Four times we failed to establish a national unity government led by Likud.”

Some of the parties that joined the coalition that eventually ousted Netanyahu from power are politically aligned with Likud but refused to enter a government with the party if it was still being led by Netanyahu, who is on trial in three corruption cases.

“So if we don’t do some serious soul searching at home, we will remain in the opposition for many years,” Edelstein said. 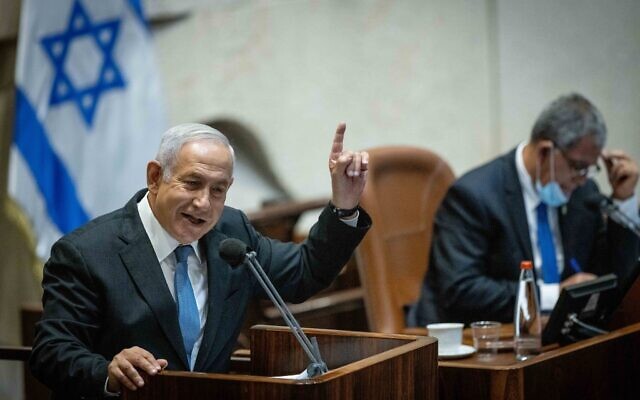 When the Likud eventually holds party elections, the choice facing its members will not be between him and Netanyahu, Edelstein said, but rather between him and Foreign Minister Yair Lapid, leader of Yesh Atid, the second-largest party in the Knesset.

Said Edelstein: “With Benjamin Netanyahu, we failed four times to muster a government. How are we suddenly going to succeed on the fifth time?

He indicated that were he to win the party leadership, he may seek to bring Likud into the government by breaking apart the existing coalition, rather than waiting for new national elections.

Assessing that there are over 70 MKs who are members of parties with a right-wing agenda, Edelstein said “it could be that we will be able to establish a national unity government without [national] elections.”

He said he had the greatest respect for Netanyahu and his achievements. “But the facts speak for themselves: We went to elections four times [under his leadership]; four times there were lots of seats for Likud; four times there’s no national government headed by Likud.”

The Likud did not win outright power in the past four elections under Netanyahu, “and apparently it never will” under the former prime minister’s leadership, he said. “More and more people in Likud are starting to internalize this.”

Though he acknowledged more primaries are not scheduled to be held soon, possibly not for another three years, Edelstein expressed hope the internal party vote will be called in the coming months in order to enable shifting Likud from the opposition.

Should he fail to win the top spot, Edelstein said he will still remain in Likud.

“Likud is a democratic party. Benjamin Netanyahu was elected again as Likud leader with a huge majority of 72.5% less than two years ago. Anyone interested in seeking the leadership is welcome to do so in the primaries,” a source told Hebrew media.

Edelstein is not the only one eyeing Netanyahu’s throne.

In May, when coalition negotiations were still in full swing following the last elections, then-finance minister Israel Katz told Likud activists that in an attempt to prevent the party’s fall from power, he had suggested that Netanyahu step aside temporarily to enable the formation of a right-wing government. Netanyahu rejected the offer.

However, there may be others who could beat both Edelstein and Katz in a party leadership race.

A June TV poll found former Mossad chief Yossi Cohen is Likud voters’ preferred candidate to succeed Netanyahu if he were to quit as leader of the party. Cohen has not yet formally entered the political arena.

Asked who they would back as Likud leader if Netanyahu were to retire, 27 percent of Likud respondents said Cohen, followed by Likus MK Nir Barkat with 16%, according to the Channel 12 news poll.

After Barkat, the poll gave Israel’s Ambassador to the United Nations Gilad Erdan the backing of 8% of respondents, followed by Katz with 5%, and Edelstein with 5%.