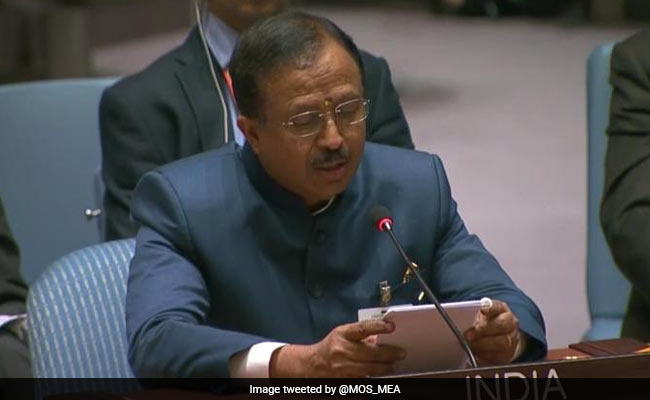 It is important that commitments made in this regard are respected and adhered to: V Muraleedharan

The change in authority in Kabul was neither through negotiations, nor inclusive, India said at the UN Security Council on Tuesday, underlining that it has consistently called for a broad based, inclusive process that involves representation of all section of Afghans.

The Taliban, ousted from power by the US shortly after the 9/11 attacks, seized control of Afghanistan in mid-August, ousting the previous elected government which was backed by the West.

The Taliban had promised an inclusive government that represents Afghanistan’s complex ethnic makeup. However, the interim Cabinet announced by the insurgent group last month was dominated by established Taliban leaders who fought against the US-led coalition forces since 2001. No woman has been named in the interim Cabinet.

“The change in authority in Kabul was neither through negotiations, nor inclusive. We have consistently called for a broad based, inclusive process that involves representation of all section of Afghans,” Minister of State for External Affairs V Muraleedharan said.

As American forces withdrew from war-torn Afghanistan, the Taliban took control of Kabul on August 15.

Addressing the UNSC High Level Open Debate on ‘Peacebuilding and sustaining peace: Diversity, state building and the search for peace”, Mr Muraleedharan said the expectations of the international community on Afghanistan, including on combating terrorism, are set out clearly in the UN Security Council Resolution 2593, that was adopted under India’s Presidency of the 15-nation Council in August.

“It is important that commitments made in this regard are respected and adhered to,” he said.

The UN Security Council resolution 2593 on Afghanistan demands that Afghan territory not be used to threaten or attack any country or to shelter or train terrorists, or to plan or to finance terrorist acts, and reiterated the importance of combating terrorism in Afghanistan, including those individuals and entities designated pursuant to resolution 1267 (1999), and noted the Taliban’s relevant commitments.

The resolution had noted the Taliban statement of August 27 in which the outfit had committed that Afghans will be able to travel abroad, may leave Afghanistan anytime they want to, and may exit Afghanistan via any border crossing, both air and ground, including at the reopened and secured Kabul airport, with no one preventing them from traveling.

Mr Muraleedharan said that the countries facing conflicts or emerging from them, face multiple challenges in their path of peacebuilding and sustaining peace. These are related to causative factors to the conflict, and primarily involve ethnicity, race, and religion, which are dominant identity markers in the society.

“In addition, societies also encounter political, social, and economic factors which play a determining role in how countries successfully emerge and move forward in addressing these fundamental challenges of state building,” he said, adding that history has shown these challenges are not limited to Africa or the developing world.

“Even the developed world, at some points in history, had faced these challenges, including through extremely violent transitions, before eventually emerging successfully.”

He emphasised that in a globalised, liberalised, and interlinked world, post-conflict state building has faced increasing societal expectations, in terms of political space and socio-economic development, gender equality, and human rights.

“As a result, state building has become more complicated. Building peace and sustaining the same, therefore, is proving more complex than ending the conflict. This is evident more so in the context of the developing world.”

Sorgente articolo:
Change In Authority In Kabul Was Neither Through Negotiations, Nor Inclusive: India – NDTV