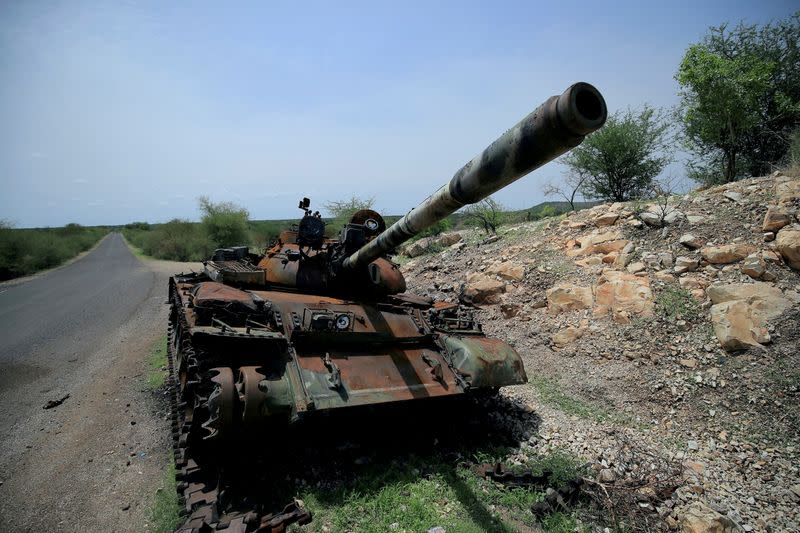 NAIROBI (Reuters) – An air and ground offensive by Ethiopian troops and their allies against rebellious forces from the northern Tigray region is intensifying, a spokesperson for the Tigrayan forces said on Wednesday, claiming “staggering” casualties.

Getachew Reda of the Tigray People’s Liberation Front (TPLF) told Reuters by phone that the Ethiopian military and allies from the Amhara region were fighting the Tigrayan forces on several fronts, in both the Amhara and Afar regions which neighbour Tigray.

A spokesperson for the Ethiopian military did not immediately respond to a request for comment. The military and government have not acknowledged a fresh offensive, which the TPLF says began with air strikes last week, days after Prime Minister Abiy Ahmed was sworn in for a new five-year term.

“It’s an ongoing fight and the number of casualties is staggering,” Getachew said, adding that he could not give details of the number of dead or wounded. He said there was fighting near the town of Weldiya in Amhara and that fighting had resumed in Afar, in the Haro and Chifra areas near the Amhara border.

Reuters was not able to independently verify the situation on the ground or to confirm casualty numbers because the area is closed to journalists and many phone connections are down.

The fighting has raised fears that it could further destabilise the Horn of Africa nation of 109 million people and plunge Tigray deeper into famine. The conflict has already drawn in Ethiopia’s neighbour, the secretive and repressive nation of Eritrea, which sent troops across the border to support the Ethiopian military when the conflict erupted in November 2020.

Aid workers citing witnesses told Reuters that Eritrean fighters were still inside Ethiopia and taking part in the conflict.

Eritrean Information Minister Yemane Gebremeskel did not immediately respond to requests for comment.

The U.S. State Department said on Tuesday it was considering the use of economic sanctions to penalise parties responsible for the violence.

Thousands of civilians have been killed and millions displaced by fighting since war erupted in Tigray. Tigrayan forces were initially beaten back, but recaptured most of the region in July and pushed into the neighbouring Amhara and Afar regions, displacing hundreds of thousands more people.

Amhara claims the Western Tigray, a swathe of fertile farmland with a strategically important border with Sudan, which has been under Amhara control since the fighting began. Tigray’s borders are now surrounded by hostile forces and the United Nations says the government is blockading food aid to hundreds of thousands of starving people – a charge it denies.

Another humanitarian worker citing witnesses said Eritrean forces were fighting Tigrayans in Berhale, a town in the Afar region.