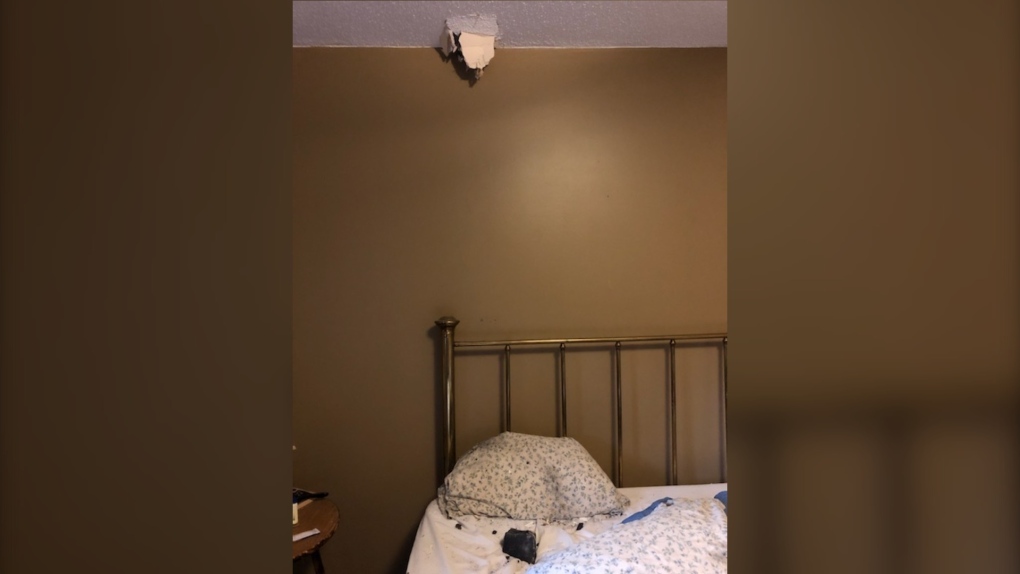 Ruth Hamilton will never forget the night of Sunday, Oct. 3.

She was sound asleep in her home in the community of Golden, B.C., when she heard her dog bark.

“And all of a sudden there was an explosion,” Hamilton told CTV News Vancouver.

She jumped up and hit the light switch and quickly spotted a fist-size hole in her ceiling.

“I was just shaking,” she recalled.

It wasn’t until she called 911 and flipped one of her pillows over that she saw it: a chunk of black rock, smooth, yet angular, lying inches from where her head had been.

“I didn’t feel it,” Hamilton said. “It never touched me. I had debris on my face from the drywall, but not a single scratch.”

After police arrived, the officer talked to a construction crew nearby. The workers reported seeing a “bright ball in the sky,” said BC RCMP Staff Sgt. Janelle Shoihet.

“And the police officer came back in and said: ‘Well, I think you have meteorite in your bed,’” Hamilton recalled.

When Phil McCausland, a geophysicist at the University of Western Ontario, saw photos of the space rock in Hamilton’s bed a few days later, he said he was stunned.

“This email came in and I said holy (expletive)! It was kind of amazing,” he said.

A team from the University of Calgary, working with Western University, headed to Golden to meet Hamilton and look for other fragments.

On Sunday, they found a second meteorite weighing about half a kilo northeast of town.

Researchers are now appealing for anyone with video or photos from the evening of Sunday, Oct. 3, around 11:33 p.m. local time, to contact them by email at wmpg@groups.uwo.ca.

“We’re trying to reconstruct what the path was through the sky as it arrived,” McCausland said.

“Because it’s scientifically even more valuable if we can reconstruct what the orbit was before it hit the Earth. It gives us an idea of where it came from.”

Chris Herd, a geologist with the University of Alberta, which has a broad collection of former chunks of asteroids that have fallen to earth, explained excitement over the “fall.”

“It’s like sending a mission, a multi billion dollar mission to an asteroid to bring a sample back, but it comes to us,” Herd said.

Hamilton told CTV News the meteorite left her hands over the weekend for the team at Western to image, weigh, measure, and to potentially take a sample, and she expects to have “Golden” as it’s been dubbed, home by Nov. 30.

“If it lands on your property it’s yours,” Hamilton said.

Experts say hundreds of meteorites reach the Earth’s surface every year, but few land in places where they can be easily recovered.

“The number one misconception is that they’re hot when they land,” Herd said, adding that they begin cooling some 15 to 20 kilometres up in the atmosphere. “Mrs. Hamilton’s bed didn’t catch fire.”

But that doesn’t make them any less dangerous, he added.

And the chances of a meteorite hitting your home, let alone landing bed with you, according to Hamilton’s spot research?

About one in 4 trillion.

When asked if she plans to buy a lottery ticket, she laughed, then replied:

“I won the lottery. I won it, I’m alive. I’m laughing about it. I feel pretty blessed.”

Sorgente articolo:
Golden, BC, woman nearly hit by meteorite after it crashed through her ceiling | CTV News – CTV News Vancouver