The unusually stark wording was used by Lapid during a meeting with Jake Sullivan in Washington and was reiterated by the foreign minister in a later sit-down with a delegation of Congressional leaders headed by House Speaker Nancy Pelosi. The message built on the one delivered by Prime Minister Naftali Bennett in his speech to the UN General Assembly last month, when Bennett warned that the Iranian nuclear program is at “a watershed moment.”

“The foreign minister shared with the national security advisor Israel’s concern about Iran’s race towards nuclear capability, and the fact that Iran is becoming a nuclear threshold state,” Lapid’s office said in a statement

His office added that Lapid raised with Sullivan “the need for an alternative plan” to the Joint Comprehensive Plan of Action, which was brokered under former president Barack Obama in 2015 and vacated by Trump in 2018. The JCPOA trades international sanctions relief for curbs on Iran’s nuclear program.

The US has yet to publicly entertain alternative options to the JCPOA in detail, insisting that it is still pursuing the diplomatic path to blocking Iran’s nuclear ambitions. President Joe Biden told Bennett in August that if that effort fails, the US will be prepared to consider other options.

Still, “Sullivan reaffirmed President Biden’s commitment to ensuring that Iran never gets a nuclear weapon,” according to a readout of his meeting with Lapid published by the White House.

It was great to welcome Israeli FM @yairlapid to the White House today. Excellent discussion of the critical regional and global issues of importance to our two countries. pic.twitter.com/v0KwrTi0bu

“The officials agreed that the United States and Israel will continue to consult closely on Iran and other critical matters impacting the security and stability of the region,” that statement added.

Washington argues that while the multilateral accord is not perfect, it is the most effective tool available to keep the nuclear program “in a box” and that once it is contained, the Biden administration will work to negotiate a subsequent agreement that addresses Iran’s destabilizing regional activity along with its ballistic missile program. Jerusalem maintains that if Iran returns to the nuclear deal, it could simply wait out the JCPOA’s sunset clauses — notably on uranium enrichment and the use of advanced centrifuges — before stepping up its bomb-making progress within the terms of the accord, with little incentive to sign the administration’s desired “longer and stronger” agreement.

Since June, in any case, Tehran has stayed away from the negotiation table in Vienna, where world powers are waiting to negotiate terms for bringing both the US and Iran back into compliance with the JCPOA.

However, officials from both the US and Iran said recently they expect the talks to restart “soon.”

On September 21, the day Iranian President Ebrahim Raisi blasted US sanctions on Iran in his address to the UN, Iran’s Foreign Ministry spokesman Saeed Khatibzadeh said that Tehran would return to the talks within weeks.

Washington says that the new government in Iran has projected interest, through intermediaries, in returning to negotiations, though the Biden administration has also clarified that its patience is running out. Iran wants the US to drop sanctions before it recommits to the deal’s restrictions, while Washington insists that Iran move first.

In the interim, Iran has openly breached some terms of the accord, including enriching to higher than permitted levels, stockpiling more enriched uranium, introducing advanced centrifuges, and moving ahead on other processes with bomb-making applications. 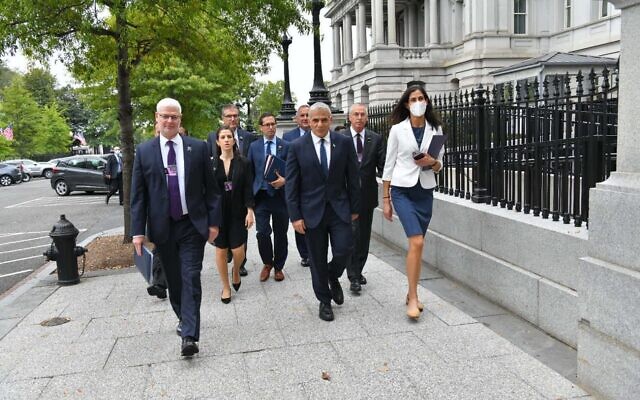 Bennett in his UN address asserted that “all red lines have been crossed” by Iran in its nuclear efforts. “Over the past few years, Iran has made a major leap forward, in its nuclear R&D, in its production capacity, and in its enrichment,” he said.

The premier on Tuesday noted that Iran has been “blatantly violating” commitments made to the International Atomic Energy Agency and voiced threats to take action against Tehran. “We’re not going to wait. I expect the global powers to hold them accountable,” he emphasized. “That would be the peaceful route. There are other routes,” Bennett warned.

Last month, Defense Minister Benny Gantz told Foreign Policy magazine that he was prepared to see the US negotiate a fresh nuclear deal with Iran, a rare comment from a senior government official not rejecting the multilateral accord out of hand.

Bennett has made it clear that he opposes a negotiated nuclear deal and has not publicly stated that its resurrection is something that Israel could live with, as Gantz intimated in his interview.