A unit of a Japanese company backed by Philip Morris International is planning to launch the world’s first plant-based Covid-19 vaccine that is potentially cheaper and easier to transport and store than conventional jabs.

Toshifumi Tada, head of vaccine business development at Mitsubishi Tanabe Pharma, said its subsidiary Medicago would apply for Canadian approval for its vaccine candidate that is made from a plant from the tobacco family by the end of this year.

The Osaka-based pharmaceutical group expects global demand for Covid vaccines to remain strong as new strains of coronavirus continue to emerge, giving it an opportunity to break into a market that has been dominated by frontrunners such as Pfizer, Moderna and AstraZeneca.

“As with seasonal flu, we don’t expect demand [for Covid vaccines] to suddenly disappear and there is still much uncertainty regarding emerging variants,” Tada said. “We believe there is value in expanding options for vaccines.”

No plant-based vaccine has been approved for use in humans. But proponents of the technology said such vaccines were attractive because plant leaves grew quickly, shortening the manufacturing process and lowering costs. Faster production, they added, also made it easier to adapt to combat new strains.

While a traditional seasonal flu vaccine takes about eight months to a year to produce, the vaccine developed by Medicago, in which tobacco group Philip Morris owns a 25 per cent stake, can be produced in five to eight weeks.

Plant-based vaccines also do not need to be deep frozen during transport since Medicago’s vaccine can be stored at temperatures of 2C to 8C. 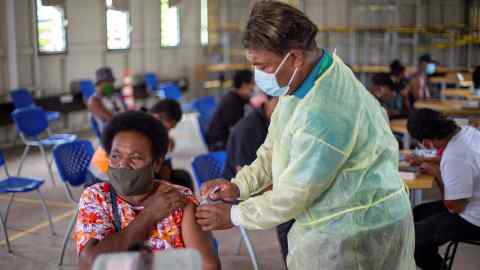 Medicago, which is partnering with GlaxoSmithKline for its adjuvant, is analysing phase 3 trial data for the Covid vaccine involving 24,000 subjects in Canada, the US, UK, Brazil, Argentina and Mexico. It also began a smaller-scale clinical trial this month in Japan, where it hopes to apply for regulatory approval by March.

No serious side effects have been reported related to its vaccine candidate, according to trial results.

Still, new entrants such as Medicago might have difficulty convincing the public, which is probably more inclined to trust well-known vaccines. Having never conducted mass production of plant-based vaccines, Tada also acknowledged that Medicago still had work to do on stabilising its manufacturing process.

The company plans to make the vaccines at its plant in North Carolina, where it expects to produce about 80m doses. Once its new plant in Quebec City, Canada, begins operations in 2024, it expects to raise its annual capacity to 1bn doses.

Japanese pharmaceutical groups have lagged behind global rivals in the development of homegrown Covid vaccines owing to a shortage of government funding and regulatory obstacles on development and testing. Those difficulties were compounded by the complication of carrying out mass clinical trials with fewer coronavirus cases compared with western countries.

“The Japanese government is aware of the challenges Japanese companies face,” Tada said. “But since Medicago had already conducted global trials, we thought it was practical to apply this data for development [of a Covid vaccine] in Japan.”