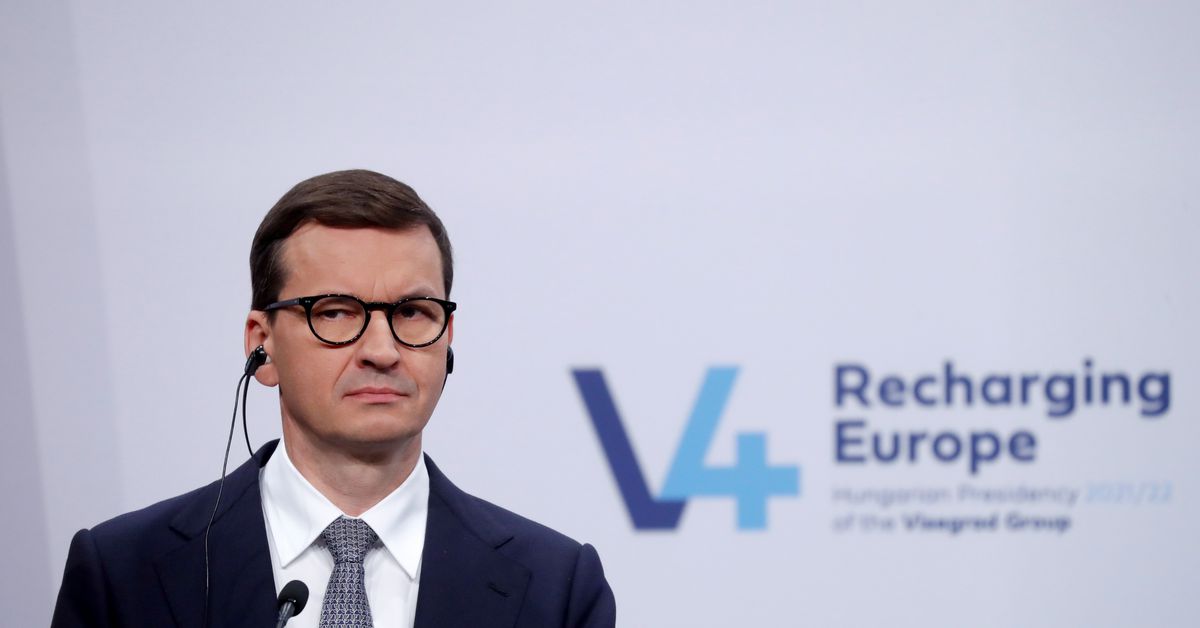 BUDAPEST, Oct 12 (Reuters) – Poland has no desire to leave the European Union, Prime Minister Mateusz Morawiecki said on Tuesday, accusing opposition politicians of spreading what he said were lies about a possible “Polexit”.

His comments came after the Polish Constitutional Tribunal ruled last week that parts of EU law were incompatible with the country’s constitution, undermining a key tenet of European integration and fuelling talk that Poland could one day quit a Union that has helped drive its economic development.

The ruling was published in the official gazette on Tuesday, making it legally binding.

More than 100,000 Poles took part in rallies on Sunday in support of EU membership. read more

“Our dear opposition are trying to insinuate that we want to weaken the union by leaving the EU,” Morawiecki said during a summit of the four central European “Visegrad” nations in the Hungarian capital Budapest.

“This is obviously not just fake news, it is something worse – it is a lie that aims to weaken the Union.”

A spokesman for Poland’s largest opposition party, Civic Platform, could not immediately be reached for comment.

PiS say the European Union has overstepped its mandate in trying to stop judicial reforms in Poland that Brussels says undermine the independence of the courts.

“Brussels should concentrate on security, stopping terrorism, economic collaboration with other countries,” Morawiecki said on Tuesday.

The right-wing populist governments in Poland and Hungary have long been at odds with the EU’s executive Commission over issues including media freedoms, migration, LGBT rights and judicial independence.

Hungarian Prime Minister Viktor Orban, a key ally of Poland inside the EU, signed a decree on Saturday welcoming the ruling by the Polish Constitutional Tribunal.

Despite Warsaw’s clashes with Brussels, support for EU membership remains very high in Poland, the bloc’s largest ex-communist country and a top beneficiary of EU aid to help poorer members close the development gap with wealthier ones.

Reporting by Gergely Szakacs and Anita Komuves in Budapest and Alan Charlish and Pawel Florkiewicz in Warsaw; Editing by Gareth Jones and Kevin Liffey