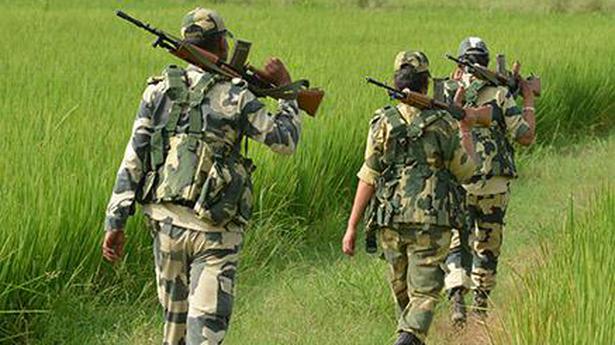 Now, the Border Security Force can ‘arrest, search and seize’ within 50 km.

The Union Home Ministry has enhanced the powers of the Border Security Force (BSF) to “arrest, search and seize” within 50 km from the international boundary in Assam, West Bengal and Punjab. Such operational powers of the BSF, a Central armed police force under the Union, will also be applicable to the newly created Union Territories of Jammu and Kashmir and Ladakh, according to a notification published in the Gazette of India on October 11.

Earlier, the BSF’s limit was fixed up to 80 km from the international boundary in Gujarat and 15 km in Rajasthan, Punjab, West Bengal and Assam.

The October 11 notification replaces a 2014 order under the BSF Act, 1968, which also covered the States of Manipur, Mizoram, Tripura, Nagaland and Meghalaya.

Though the erstwhile State of Jammu and Kashmir that was bifurcated into two Union Territories in August 2019 was not mentioned in the 2014 order, references to it exists in a previous such amendment in 1973. The October 11 order specifically mentions the two Union Territories.

The violations for which the BSF carries out search and seizure include smuggling of narcotics, other prohibited items, illegal entry of foreigners and offences punishable under any other Central Act among others.

A BSF official said the amendment “establishes uniformity in defining the area within which the BSF can operate” as per its charter of duties, adding that this would enable improved operational effectiveness in curbing trans-border crimes.

After a suspect has been detained or a consignment seized within the specified area, the BSF can only conduct “preliminary questioning” and has to hand over the suspect to the local police within 24 hours. The BSF does not have the powers to prosecute crime suspects.

Punjab Chief Minister Charanjit Singh Channi said the move was an attack on federalism. “I strongly condemn the GoI’s [Government of India’s] unilateral decision to give additional powers to BSF within 50 KM belt running along the international borders, which is a direct attack on the federalism. I urge the Union Home Minister @AmitShah to immediately rollback this irrational decision,” he tweeted.

In 2012, Narendra Modi as Gujarat’s Chief Minister had written to the then Prime Minister Manmohan Singh opposing the Centre’s proposed move of amending the BSF Act, 1968, to give wide powers to the Central armed police force to arrest and search anybody in any part of the country.

“Policing in the hinterland is not the role of a border guarding force, rather it would weaken the capacity of the Border Security Force in discharging its primary duty of guarding the international border,” he said.

Mr. Randhawa added that Mr. Channi never asked the Centre for enhancing the jurisdiction of the BSF along the international border.

The Shiromani Akali Dal also termed the Union’s move “the imposition of the President’s rule through the back door in nearly half of Punjab. This virtually turns the State into a de facto Union Territory. This devious attempt to place the State directly under the Central rule must and will be opposed,” said senior Akali leader and former Minister Daljit Singh Cheema.

There is no response from the West Bengal government yet.